At the New Republic Headquarters, Palomo dramatically tells his comrades about how he looked after Tucker while he was hurt, after the Feds and rebels rescued the Blood Gulch Crew from the radio jammer station. Tucker, having healed from his wounds, interrupts Palomo and explains what really happened. Following this, Tucker, Simmons, Caboose, and Grif thank Jensen, Palomo, Bitters, and Smith for rescuing them, though Grif explains that they never intended to be rescued and saved them strictly for selfish reasons. In response, the recruits thank the four captains as well.

Meanwhile, Kimball and Doyle, after agreeing to a truce, discuss moving the New Republic to Armonia, though Doyle is reluctant. The two then thank Washington, Sarge, Donut, and Lopez for their help, but Wash tells them to thank Tucker, as he was the one who formulated the entire plan. When Doyle asks the four if he can do anything for them, Sarge requests for a rank higher than Captain. In accordance to his request, Doyle promotes Sarge to Colonel, with the latter gloating it to Grif.

Near the lake, Epsilon finally manages to decrypt the manifest, with help from Epsilon-Delta, and proceeds to process it. After he finishes, he reveals to Carolina that Charon Industries, a large corporation specializing in cryogenics, technology, and weaponry, owned many of the equipment on the ship. He then explains that Project Freelancer stole certain pieces of equipment from Charon's private security force, mainly known to the Freelancers as the Resistance, and the company and UNSC have been working closely together. Suddenly, Epsilon soon demands to speak to Dr. Grey, in order to gain all known radio frequencies used by the mercenaries that the crew captured.

Meanwhile, Control scolds Felix and Locus for their failure and decides that, due to their operation being in jeopardy, they declare war on the Blood Gulch Crew and Chorus armies. Suddenly, the Blood Gulch Crew interrupt their transmission and acknowledge Control's true identity: Chairman Malcom Hargrove. The Blood Gulch Crew then confidently inform the Chairman that they, the Federal Army, and the New Republic will join forces and accept his declaration of war.

In a post-credits scene, the Chairman asks F.I.L.S.S., who is shown to have been recovered, to verify Locus' delivery of a crate. F.I.L.S.S., unhappily, assures him that the crate from the ship was in fact delivered, much to the Chairman's satisfaction. It is then revealed that the crate encases the helmet of the Meta.

Cut to Palomo and the other New Republic recruits standing in front of a group of New Republic soldiers. Palomo is describing the rescue of the Reds and Blues.

Palomo: Pheewww...! The Pelican goes in for a landing, but the radio jammer's shooting up all sorts of electricity and stuff. It was like (mimics lightning) ka-pew, pew-pew-pew-pew!

Palomo: We're on the ground. Captain Tucker's bleeding out. The Reds and Blues are all bashed up. Things (camera zooms in on his face) don't look good!

Palomo: We led them all aboard the ship and take off as fast as we can and that's when he spoke to me. "Palomo, come closer. Come closer." It was my captain. I leaned in. "Don't speak Tucker, you need your strength." But he brushed my hand aside, looked at me straight in the eyes, and said to me, "Palomo, you did good kid. You did good."

Cut to Tucker, looking up at Palomo. Caboose, Simmons, and Grif are seen standing next to him.

Tucker: What I actually told you was to stop crying and to shut the fuck up.

Palomo: Okay yeah but the sentiment was still there.

Tucker: I fucking hate you Palomo.

Bitters: You know, if we hadn't shown up with that ship you'd probably be dead like for real this time.

Grif: Hey, we're a bunch of mavericks okay? We weren't even planning on making out alive. That was just an added bonus for being so fucking awesome.

Jensen: You went on a suicide mission for us?

Simmons: Well uh you know we figured we owed you one.

Jensen: That's so selfless. And hey, your voice didn't crack.

Simmons: (nervously) It didn't? I mean, I don't know what your talking about.

Grif: Alright, don't get carried away. You guys just happened to be the first people we ever met who though we were cool. We saved you strictly for selfish reasons. And with the hope there'd be more pampering upon our return.

Matthews appears from nearby.

Matthews: I'm here whenever you need me sir!

Grif: He seriously survived the fight? I mean really? The universe just had to spare Mathews.

Smith: Well I think I speak for all of us when I say thank you.

Caboose: And I think that I speak for all of us when I say when this feels like the beginning of a beautiful friendship. Isn't that right Freckles.

Smith: Thank you captain. I'll remember this till the day I die. Or my name isn't John Elizabeth Andersmith.

Pan up to Kimball and Doyle, overlooking the compound.

Kimball: So what do you think?

Doyle: I think it's an absolute mess.

Kimball: Well your army didn't exactly leave us with many options over the years.

Doyle: Yes. Well I suppose we can't expect you to continue operating out of a hole in the ground. I'll talk with one of my new advisers and see if we can have your people set up at another one of our outposts.

Kimball: I was actually thinking about moving to the capital.

Kimball: Excuse me? My men deserve a roof over their heads, just like yours.

Washington: Hey. You both agreed to a temporary truce, so why don't you start with a little cooperation.

Doyle: Very well... I will see what we can do. Agent Washington, you have my thanks.

Kimball: And mine. If it wasn't for you all, we'd all be gone.

Washington: Well... thanks, but you should really thank Tucker. The whole plan was actually his idea.

Kimball: Is that so.

Sarge: Kind of a shocker, huh?

Kimball: No, not really.

Doyle: If there's anything we can ever do for you, please don't hesitate to ask.

Sarge: Promote me to Colonel!

Doyle: Oh! (stutters) very well then. I- In honor of your service, I hereby promote you to Colonel...eh..Sarge.

Sarge yells at Grif from atop the platform.

Sarge: You hear that numbnuts?! I outrank you, again! Hah!

Cut to Carolina near the algae lake. Epsilon appears next her.

Epsilon: So did ya miss me?

Carolina: Actually I found the peace of mind to be rather nice for a change.

Epsilon: Oh yeah I bet it went along great with that ass kicking.

Carolina: That was part of the plan.

Epsilon: Oh really? Because I thought the plan was to distract Locus, not let him mop the floor with you.

Carolina: Look, they were better than I expected, okay.

Carolina: I'm still surprised you went along with the plan.

Epsilon: Yeah well, I figured it was time to have faith in them too.

Carolina: What was that?

Epsilon: That was the end of a very long and very annoying decryption process.

Carolina: You've got the manifest?

Epsilon: Fuck yeah I got the manifest. I'm processing it right now.

Epsilon recedes temporarily and returns within the second.

Epsilon: Well, not the most dramatic revelation, but I believe we have our culprit.

Carolina: Who is it?

Epsilon: Charon Industries. Big umbrella corporation that got a hand in every major market you can think of. Even messed around with cryogenics a few years back, but it looks like their largest profits come from weapons and technology; they own most of the stuff on the ship.

Epsilon: Yeah, Project Freelancer stole some assets from them once or twice, and managed to destroy quite a bit of private property in the process.

Carolina: You mean the Resistance? I thought they were a UNSC splinter group?

Epsilon: The soldiers were all UNSC. But according to my records, they've been hired on to act as Charon's private security force.

Carolina: Is that legal?

Epsilon: Tch. I doubt it. Looks like Charon and the military started getting really buddy-buddy around the time that- oh.

Epsilon: The lunatic, what's she doing?

Epsilon: Perfect. Tell her I want them to give me all known radio frequencies used by the mercenaries.

Epsilon: I need to make a call.

Cut to the interior of a mercenary compound, where Control speaks to Locus and Felix.

Control: (voice only) I am at a loss, gentlemen. Years of arduous labor and delicate manipulation all made worthless by your inability to stop a single squad of what can hardly be considered soldiers.

Felix: They got lucky.

Locus: They were underestimated. And it will not happen again.

Control: (voice only) Our operation now lies in extreme jeopardy. Word of our involvement can never find its way back to Earth or the UNSC.

Locus: Then what are our orders?

Caboose is suddenly heard over the channel.

Locus: An outside transmission.

Felix: How'd they get this channel?

The screen then cuts to the Blood Gulch Crew, alongside Doyle and Kimball.

Epsilon: Ya know, I really love the picture they used for this thing but I gotta say I think I like description even more. Pictured above, the Red and Blue troopers of Project Freelancer receive a full pardon from UNSC Oversight Chairman and Charon Industries CEO, Malcom Hargrove. I can't imagine you like publicizing that second bit very much though, probably not very good for business. Am I right, Chairman?

Cut to the interior of the Staff of Charon, where the Chairman is seen, switching off his "Control" voice filter.

Chairman: On the contrary, you'd be surprised as to what can come of a merger between politics and corporations. If your here to negotiate a surrender, I'm afraid I must inform you that your ship has set sail. Quite literally in fact.

Cut back to the Reds and Blues.

Washington: Actually, we were just hoping to read you a letter

Sarge: Its just a little somethin' we put together for ya. Considerin' we'll probably be seein' a lot of each other over the next few weeks.

Tucker: Take it away Church.

Epsilon: Dear Chairman; It has come to our attention that you have declared war on the planet Chorus. We regret to inform you that this is a really... shitty idea. Not only have you managed to annoy the people that you've failed to kill, time and time again, you've also found a way to piss off an entire planet. Now they may not have the best equipment and they might not be the best fighters, but as you're aware, they've been fighting for a very long time. And now that they're not fighting each other, they're more than happy to dedicate all of their time to fighting... you. So dear Chairman, to you and your idiotic mercenaries, we would like to say: Bring it on, motherfuckers! We're not goin' anywhere. From your friends, the incredibly badass and sexually attractive, Red and Blue soldiers of Project Freelancer. P.S.; suck our balls.

Cut to credits. Cut back to the interior of the Staff of Charon, where the Chairman is seen.

Chairman: Please clear my schedule for the rest of the day.

Chairman: And F.I.L.S.S., Could you verify that Locus' delivery was sent to the trophy room?

F.I.L.S.S.: (voice only) The crate from the shipwreck was unloaded and delivered this morning, sir.

Chairman: Wonderful. I could use a bit of good news today.

Cut to a holographic display of the Meta's helmet. Cut to black. 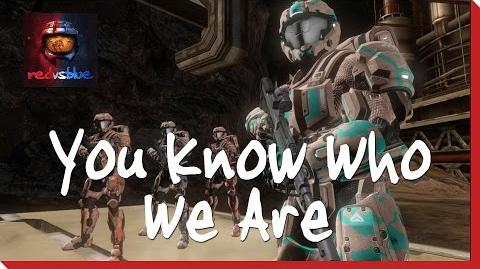 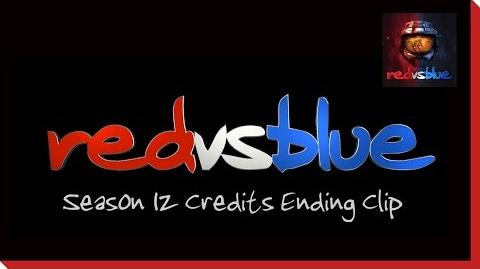