You're the Bomb, Yo is the fourth episode of the third season and the forty-second of The Blood Gulch Chronicles.

In the Teleporter Nexus, Simmons reprograms a teleporter and advises Donut on reprogramming the Reds' teleporter in Blood Gulch. On Sidewinder, a cloaked Wyoming kills all of the Reds and tells Church and Grif that he is leaving them to starve to death. Meanwhile, everyone else emerges from the teleporter on Sidewinder, Tucker covered with "black stuff" (which luckily prevents Wyoming from recognizing and shooting him). While Donut and Caboose clean off Tucker's armor, the jail cell holding Church and Grif mysteriously opens. Wyoming spots Tucker from afar and aims at him; Tex ambushes him, but O'Malley, Wyoming's employer, ambushes her.

Ticking in the background as it fades in on Grif and Church.

Church: Thanks for the support, Grif. Way to be a team player.

Grif: Hey, I gotta think about myself here.

Church: What I can't figure out is why the reds are still here. Tex already wiped out all the blues. Why wouldn't they just pull out?

Grif: As someone who's taken orders from Red Command for the last three years, trust me, it's not that surprising.

Cut to Sarge, Caboose and Simmons in the janitor closet.

Simmons: Okay, we traced the bomb activation signal to Sidewinder. How much time do we have left Sarge?

Donut: (through staticky radio) Everyone here is set to transport.

Tucker: (through staticky radio) I'm not going through that thing. I'm serious.

Sarge: We need to get there as soon as possible. Did you set their teleporter to take them straight to Sidewinder?

Simmons: I walked Donut through it. He says he did everything right, but I figure they have a fifty/fifty chance of ending up in Sidewinder, or in the middle of deep space.

Sarge: What about us?

Simmons: I programmed ours myself. We're fine.

Sarge: I find the risks acceptable.

Donut: I never knew a Phillips screwdriver was the X one. Do you think it's named after a guy named Phillip? That guy Phillip must have a fucked-up-shaped head!

Sarge runs through a teleporter, and emerges from another behind Caboose.

Simmons: Uh sir? The teleporter I reprogrammed is over there.

Sarge: Oh well, heads up evil-doers; here we come to save the diya-ah forget it, let's just go.

Grif: (singing poorly and totally out of tune) Nobody knows, the trouble I've seen. Nobody knows but Jesus.

Church: Will you shut up?

Grif: You just can't face the fact that I've adjusted to life on the inside! I'm hard now!

Church: Please, give me a break.

Grif: As the prison bitch, I would not expect you to understand.

Cut to a firefight down a hall somewhere.

Church: What's going on out there?

Grif: Oh man, maybe our crew's come to bust us out of the joint. I don't know if I can live on the outside though any more Church. I'm all institutionalized and shit.

Church: I don't know. Sounds like whoever's fighting them is winning. That can't possibly be our guys.

The soldier runs around a corner and gets punched out. Church and Grif listen to the sound of invisible approaching footsteps.

Wyoming: (decloaking outside the bars of the cell) Hello Church.

Wyoming: Been hired to do a job with your little friend Tucker. Seems he's discovered some information that someone else isn't happy about.

Grif: Who's this kracker?

Church: Ah, he's just some scumbag bounty hunter that was in the same division as Tex.

Wyoming: Ah yes, dear Tex. After I take care of your little friend Tucker, I'll be taking care of her as well.

Wyoming: But you won't. Everyone here is dead now. Noone even knows where you are. So I suppose now you'll just have to starve to death. Hu-huh. Cheerio.

Wyoming goes invisible and runs off.

Church: We gotta find a way to escape, Grif.

Grif: If only we had bedsheets.

Church: There's no window. What good is tying together bedsheets gonna do us?

Grif: Who said anything about tying them together? I wanna take a nap. If I have to die of hunger, I wanna do it in my sleep.

Cut to Donut, Tucker and Tex on the red base, and Sheila below, looking up at them.

Sheila: Good luck everyone, take care. I packed you all lunches for the trip.

Tucker: Thanks Sheila, that was really nice of you.

Donut: Not really. All my bag had was an air filter and a thermos full of brake fluid.

Sheila: Make sure to wash your exhaust pipes every day.

Tex runs through the teleporter, then Donut.

Tucker: Bye Sheila, we'll come back for you soon.

Cut to Sarge, Simmons and Caboose standing around a teleporter receptacle.

Tex emerges and runs off, then Donut emerges.

Donut: Yeahah, I knew I could fix a teleporter. I guess these hands aren't just for manicuring after all. Yeahuh.

Simmons: What's all that black stuff on your armor?

Tucker: Just me? What the fuck?

Caboose: Tucker, I am so glad to see you. Here. Let me help you clean your armor off, by rubbing you all over.

Tucker and Caboose run off.

Cut to Wyoming looking at those three through a sniper rifle.

Cut to Tex looking at him.

Cut to Simmons and Sarge.

Simmons: So what's the plan, Sarge?

Sarge: First, we need to locate Church and get that bomb defused. Then we can find Lopez, download our plans, and get back to fighting the blues.

Simmons: And we also need to find Grif. Right sir?

Sarge: Well, not every plan is perfect, so I suppose we could accidentally find Grif along the way.

Cut to Grif and the still-ticking Church in their cell.

Church: Okay Grif, I've been putting something off that I can do to help us escape, but, I gotta warn you, it might scare you a little bit.

Grif: You want scary, you should try showering in cell block C. Those guys are animals.

Grif: You opened the doors? That wasn't scary at all.

Church: What? I didn't do that. Somebody on the outside must have done it. Alright, let's go.

Grif: Freedom, it smells so sweet! Let's go rob a liquor store on the way home.

Cut to Caboose, the clean Tucker and Donut.

Caboose: There, you are all clean.

Tucker: Thanks, but you didn't need to spend so much time on the codpiece, Donut.

Donut: A three-coat waxing is just my way of saying I care.

Cut to Wyoming looking through his sniper rifle at the newly cleaned Tucker.

Wyoming: Well, there we are, mate.

Tex: (aiming at Wyoming from close range) Hello Wyoming. Why don't you stop pointing that gun at my friend.

Wyoming: Now how did you know that.

Tex: When someone lives in your head for a few years, you get to know him. Where is he.

Wyoming: Oh, he'll be along shortly.

O'Malley cocks a shotgun behind Tex.

O'Malley: (evil laughter) Only now do you realize the folley of your idle chit-chat! Evil wins! Hahaha! Good sucks an egg.

Doc: I'm really sorry about this sir- I mean ma'am- I mean miss! 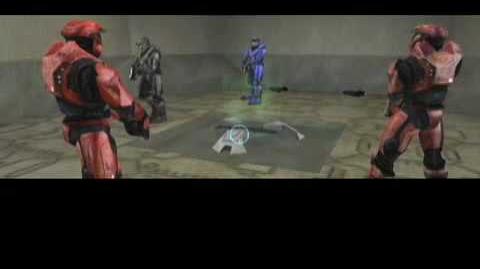 You're the Bomb, Yo
Original 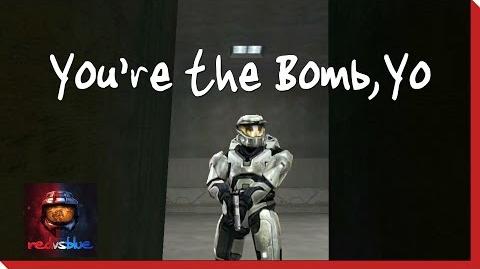 You're the Bomb, Yo - Episode 42 - Red vs. Blue Season 3
Remastered
Add a photo to this gallery
Retrieved from "https://rvb.fandom.com/wiki/You%27re_the_Bomb,_Yo?oldid=136832"
Community content is available under CC-BY-SA unless otherwise noted.