Why Are We Here?

Why Are We Here? is the first episode of the machinima series Red vs. Blue, and premiered on the Rooster Teeth website on April 1, 2003. It introduces the characters of Simmons, Grif, Sarge, Church, and Tucker in a boxed canyon known as "Blood Gulch".

The episode begins with Grif and Simmons standing on top of Red Base, seemingly on sentry duty. Simmons asks Grif if he knows why they are in Blood Gulch, but Grif misinterprets the question and assumes Simmons is talking about why they exist in the universe and their purpose in it and gives a long answer regarding whether there is a God or not. Simmons informs Grif of the mistake in his answer and asks if Grif would like to talk about it, but Grif refuses.

Meanwhile, Church and Tucker are spying on the two Reds via the scope of Church's sniper rifle. Tucker asks what the two are doing, and Church says they are just talking and that Tucker is being annoying for continually asking that question. Tucker then says he's not able to see anything because he doesn't have the sniper rifle, to which Church replies that he hates him.

Back at Red base, Grif and Simmons continue their conversation, talking about finding aliens to fight, when Sarge orders them down.

Pan up from the ground and close in on two soldiers on top of a base, one clad in maroon armor, Simmons, the other in orange, Grif.

Simmons: You ever wonder why we’re here?

Grif: It's one of life's great mysteries isn't it? Why are we here? I mean, are we the product of some cosmic coincidence, or is there really a God watching everything? You know, with a plan for us and stuff. I don't know, man, but it keeps me up at night.

Both stare at each other in silence.

Simmons: What was all that stuff about God?

Simmons: You wanna talk about it?

Simmons: Seriously though, why are we out here? As far as I can tell, it's just a box canyon in the middle of nowhere. No way in or out.

Grif: Yeah. That's because we're fighting each other.

Simmons: No, no. But I mean, even if we were to pull out today, and if they would come take our base, they would have two bases in the middle of a box canyon. Whoopdee-fucking-doo.

Grif: What's up with that anyway? I mean, I signed on to fight some aliens. Next thing I know, Master Chief blows up the whole Covenant armada and I'm stuck in the middle of nowhere, fighting a bunch of blue guys.

Zoom in on two soldiers watching Grif and Simmons from atop a cliff, one wielding a sniper rifle and in cobalt armor, Church, the other standing behind him in aqua armor, Tucker.

Church slowly turns around to face Tucker, lowering his rifle.

Tucker: I said, "What are they doing now?"

Church: (frustrated) God damn, I'm getting so sick of answering that question!

Tucker: (defensively) You have the fucking rifle, I can't see shit. Don't bitch at me because I'm not going to just sit up here and play with my dick.

Church: (interrupting) Okay, okay, look... they're just standing there and talking, okay? (getting angry) That's all they're doing. That's all they ever do, is just stand there and talk. That's what they were doing last week, that's what they were doing when you asked me five minutes ago. So, five minutes from now, when you ask me, “What are they doing?” my answer's gonna be, “They’re still just talking, and they're still just standing there!”

Tucker: ...What're they talking about?

Church: ...You know what? I fucking hate you.

Cut back to Grif and Simmons.

Grif: Talk about a waste of resources. I mean, we should be out there finding new and intelligent forms of life... you know, fight them.

Simmons: Yeah, no shit. That's why they should put us in charge.

Cut to a low angle shot of a soldier in red armor, Sarge, who is seen looking up at Simmons and Grif.

Sarge: Ladies, front and center on the double! 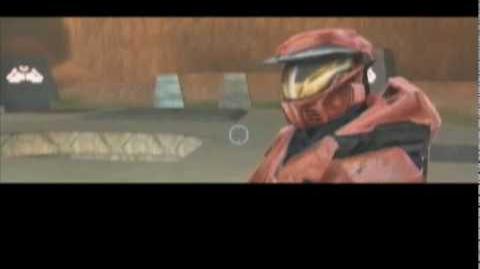 Episode 1 Why Are We Here?
Original 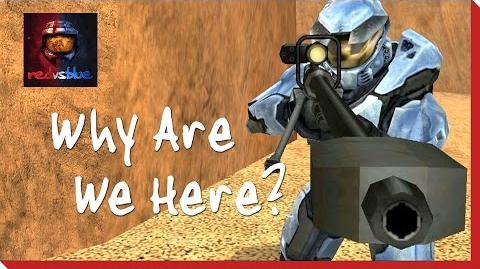 Why Are We Here? - Episode 1 - Red vs. Blue Season 1
Remastered
Community content is available under CC-BY-SA unless otherwise noted.
Advertisement