Whole Lot of Shaking is the nineteenth episode of Red vs. Blue: Season 9 and the 192nd episode overall.

As Andy counts down, the Reds panic and lament themselves dying because of Andy and the earthquakes, with Simmons revealing that he hated and didn't respect any of his teammates. Andy reaches one but, unfortunately, doesn't know how to explode.

At Blue Base, the Blues prepare an attack on the Reds, but Epsilon tells them that he's not going and asks them if they see Washington to tell him "Memory is the key". Tex tells Epsilon that he can just sit around while the world ends but she's going to do something about it and decides to go anyway. Tex then has the Blues get in the tank and the three head to Red Base. Back at Red Base, Andy asks about Red Team's insurances covering the apoclypse causing Grif to tell Andy to give it a rest.

Meanwhile, on the Mother of Invention, North informs York that the leaderboard has changed. York tells him that many things have and will soon continue to change.York and North then begin to discuss the changes ever since Texas showed up, in which York reminisces about the cops shooting at them during the last mission and questions if they are "the good guys." Meanwhile, C.T. is seen talking to an Insurrectionist over a computer terminal. When Wash approaches her, C.T. tells him to mind his own business.

Back at Blue Base, Tucker and Caboose drive the tank to Red Base. As Epsilon watches them go, Tex appears behind him. Epsilon then asks if she finally believed him, in which Tex states that she doesn't but decided that he hasn't steered her wrong thus far. As the two continue to talk, Tex asks if Epsilon has any regrets, in which he replies, jokingly, that he never learned how to shoot the sniper rifle. Tex tells him that he could have practiced during some down time, in which Epsilon replies that he had other things on his mind.

Scene opens up at Red Base, with Simmons, Grif, Sarge, Donut and Andy. Grif is running back and forth behind Donut and Simmons.

Grif resumes running back and forth.

Sarge: Men, remain calm. This is no time to panic.

Simmons: Sir, the world is shaking apart, the ground is opening up to swallow us and we're holding a bomb that will blow us all up before any of that happens. I submit to you that if there is any time to panic, this is that time!

Grif: I guess this is it everyone!

Simmons: Does anyone have anything they wanna say?

Donut: I do! Whoa, gosh, this is such an honor! I have so many people to thank. All the little people-

Simmons: Donut! This is not the time for your pre-rehearsed academy award speech!

Sarge: Men, it's been an honor to serve with you, and I say that using the loosest possible definition of both the words honor and serve.

Grif: My only regret is that I don't have more regrets!

Simmons: Well, if I'm gonna die, then I may as well be honest; I never respected any of you, I thought I was better than all of you this entire time, I think my skills were underappreciated and I wasted my life knowing all of you. In a way, I'm sad to die but I'm glad knowing none of you will live either. There, I said it.

Donut: The bomb was a dud?

Sarge: So, did you want to finish your thought there, Simmons?

Simmons looks at Sarge while Grif and Donut look at Simmons.

Simmons: Well, this is awkward.

Andy: Yeah, tell me about it.

Cut to Blue base. Tucker, Caboose, Church and Tex are all present.

Tucker: What? Fuck no!

Church: Nah, you guys go. Good luck. I don't know how much time we have left. I think I'd rather spend it someplace I like. Oh, and if you see Agent Washington, do me a favor and tell him I said "Memory is the key." He'll know what that means. Oh, and also, tell him I said thanks. Good luck guys.

Tex: Well, I'm going. You can sit around til the world ends but as long as I'm here, there's something I can do about it.

Cut to red base.

Sarge: Everyone, get in the digger!

Simmons: It's no use, Sarge, there's no time!

Donut: Repent! Repent! Give up your evil ways! The end is nigh!

Grif: Yeah, did you suddenly find God or something?

Donut: Yeah, I've never been much for religion. But I figure I can get it just under the wire. Why not change my bet?

Grif: Calm down. The world is not ending. Everything will be just fine. Everyone always thinks the world's gonna end during their lifetime, but the truth is none of us are that cool or interesting, so get over it.

Simmons: At the current rate of decay, the world will shake itself apart in just a few minutes!

Cut to Freelancer base, in the middle of what looks like a locker room. Agents New York and North Dakota are present.

York opens a locker and pulls out his old helmet, looks at it, then tosses it in the trash.

York: I think we've got more change on the way.

North: You feel it, too?

York: I felt it since Texas showed up and when cops and military started shooting at us, yeah, I find that I just keep coming back to the same question in my head over and over again.

North: And what question is that?

North: Yeah, 'course we are.

York: You don't sound so sure of yourself.

South walks past the ranking board, looks at it, then storms out. C.T. is at a monitor, talking to an Insurrectionist.

C.T. looks over to find Agent Washington walk up and look at her.

C.T.: I have to go. What're you looking at? Mind your own business.

Washington: I should say the same.

Cut to Blood Gulch, Caboose and Tucker are driving around inside Sheila.

Tucker: I am punching it!

Tucker: Caboose, this is as fast as this thing gets. It's a tank, not a fucking Lamborghini!

Tex: So, think they'll make it?

Church: Oh, I think they have enough time to squeeze in one last adventure. Can't really ask for more than that, can you?

Church: So, you decided to stay?

Church: Finally gave in and believed me, eh?

Tex: Ah, not exactly. I just figured you haven't steered me wrong so far, why bet against a streak?

Church: Well, come sit with me then. I got some great seats for the end of the world. I saved you one.

Tex: Okay. Sure you wanna do this?

Church: Yeah, you know it took a couple versions of me to understand it but I think sometimes, sometimes you just gotta let go. And if you do, the things you let go can sometimes come back on their own. They did today.

Tex: Wow, guess the theory has proven right then. Nick of time.

Church: Yeah, I guess it was.

Church: Eh, a few. Probably should've learned how to use this damn sniper rifle.

Tex: You guys did have a lot of down time. Could've practiced, I don't know, once or twice.

Church: Well, what can I tell you? Had other things on my mind, I guess. 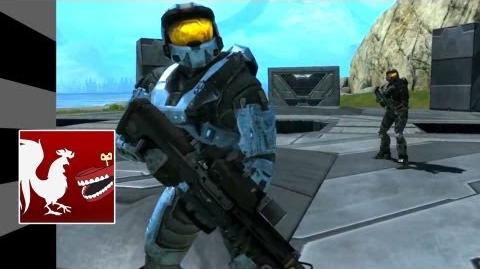 Retrieved from "https://rvb.fandom.com/wiki/Whole_Lot_of_Shaking?oldid=136125"
Community content is available under CC-BY-SA unless otherwise noted.