At Zanzibar, Carolina observes the turbines within the facility as Washington arrives. He asks her what she is doing, and she answers that she is looking for leads on where the Director is. As Tucker and Epsilon spy on the two from a balcony, Carolina expresses her regret on giving Sigma, her original A.I., to Maine and contemplates that the Director probably knew what would happen. Wash and Carolina then discuss how hard the Director was on the Freelancers, causing Tucker to lose control and yell out his catchphrase, giving away his, and Epsilon's, position. Epsilon demands to know what Carolina is planning, but she tells them that their "squad" is on a need-to-know basis. She demands that they leave, which they do. After the outburst, Wash tries to calm down Carolina, but she refuses to, assuring that she is able to successfully lead the squad herself.

Meanwhile, many years ago inside the Mother of Invention, the Director and Counselor teach the idea of "A.I. Theory" to the Freelancers and some of their own A.I. South rudely asks why they need to know about such a concept, elaborating on how she doesn't even possess an A.I. Carolina tells her that it is crucial to their training and that she, like South, does not have an A.I. either, as she gave her A.I., Sigma, to Maine to allow him to communicate. Sigma informs Carolina that he and Maine are appreciative of her sacrifice and that she is the most capable of Freelancers with no A.I., other than Tex.

Speaking of her, South asks why she isn't in class, in which the Director answers that Texas has already taken the lessons and no longer requires them. Sigma then asks about the fourth level of A.I. rampancy, Metastability, where an A.I. could be theoretically considered fully human. The Counselor assures that no A.I. has ever reached that particular level but Sigma displays great interest in the subject. As the others leave, Sigma forms the Meta symbol on the room's matrix computer, which displays that the Metastability is not exact.

Back in the present, Caboose asks Carolina where Church is, but only manages to anger Carolina, who tells him that his "friends" need to back off. As she passes the Warthog, the Reds pop out and expresses their agreement over how Simmons might be right about Carolina. Washington approaches them and asks about Carolina's whereabouts. The Reds tell him that they would like to go home and let Wash continue on his quest. However, Wash tells that if they go, they will most likely fall into an ambush by the authorities because of their status as wanted criminals. As Wash walks away, the Reds decide to stay, believing they might be able to help with the matters at hand.

Washington walks up to Carolina, who is standing by a generator.

Washington: Looking for something?

Carolina: Leads, information, anything. You said Maine had been through here, right?

Washington: Well, yeah, but that was ages ago.

Carolina: Then look closely. Don't tell me hanging around those morons has turned you soft. (As she says this, Tucker and Epsilon sneak in on a balcony above)

Washington: The Meta was attempting to transfer energy from these turbines into his suit. It was the only way he could keep his equipment running.

Washington: Carolina, it wasn't your fault.

Carolina: But it was my A.I.

Washington: None of us could have known what would happen.

Carolina: Yeah? Well sometimes I'm not so sure.

Carolina: We were told that the A.I. were specifically designed for each of us, right? North was chosen for Theta, York had Delta, but Sigma was mine.

Washington: What are you saying?

Carolina: You really think the Director didn't know what would happen?

Carolina: He always had his little experiments. He just forgot to take a few extra variables into account.

Washington: And what about now? The whole world thinks you're dead. Do you think he knows you're coming for him?

Carolina: Yes, I do. And for once, I look forward to proving him right.

Washington: (Sighs) The Director was always hard on you.

Epsilon: (Whispering) Shut up. They're gonna hear you.

Carolina: He was hard on all of us.

Tucker: Oh come on, you've got to let me have that one.

Epsilon: Quiet, you're going to give away our position.

Tucker: I've got about five positions in mind for her. Bow chicka-

Washington: Yeah, you're right. But you have to admit, he was also pretty hard on himself.

Epsilon: Look, if you two are planning on dragging us around wherever you want, the least you could do is fill us in.

Carolina: You and your squad are on a "need-to-know" basis. And right now, you don't need to know anything.

Tucker: Okay, that one was on you.

Epsilon: Fine, we're leaving already. (Epsilon starts walking away) Hey Tucker, I need you to leave, I can't actually do it on my own.

Washington: Carolina, you've got to calm down.

Carolina: Don't tell me how to lead my squad, Washington. Now, sweep the area and report back to me when you're done. (Walks away)

Washington: (Sighs) On it, boss.

Counselor: And as the Director accurately predicted in his thesis on the subject, we see that cognitive impression modeling can be separated from the host. Naturally, this remains an inherently deconstructive process. But most of all, the biggest concern of any full A.I. entity is the prospect of rampancy, which we covered last week.

As the Counselor speaks, the scene pans into a classroom-like room where Wyoming, North and South Dakota, York, Carolina, Maine and Washington, all helmetless, sit with Delta, Theta and Sigma at desks. The Counselor and the Director stand at the front of the room.

FREELANCER CLASSROOM. MANY YEARS AGO...

Director: Of course our A.I. units are what we call fragments, so there's very little chance that a personality subroutine can run off unchecked.

Counselor: Are there any questions?

South Dakota: Yeah, I got a question. Why do we need to learn all this stuff?

Carolina: A.I. theory is like vehicle maintenance, South. If we're going to use this equipment, any equipment, we need to know how to care for it.

South Dakota: Oh yeah, Like a coffee maker or a vacuum cleaner.

Delta: That was rather rude.

Carolina: No, not the same as that.

South Dakota: I don't even have one because someone didn't bring enough to share, so why am I sitting through this elementary classroom bullshit?

Carolina: I don't have one either, South.

York: That's only because you gave yours to Maine.

Carolina: He needed to be able to communicate after his injury.

South Dakota: Oh yeah. That's the only reason you did it. You're a real hero, Carolina. It's not like Maine has much to say anyway.

Sigma: I would like to say just how appreciative the two of us are for Carolina's sacrifice. Agent Carolina, if anyone can excel without an A.I. unit, it is you.

Sigma: And Agent Texas of course. That goes without saying.

South Dakota: I notice she doesn't have to attend class.

Counselor: What the Director is trying to say is that Agent Texas has already completed her A.I. theory course work. I think that's enough for today.

Sigma: If I may, Counselor. I have just one last question.

Sigma: On the different levels of A.I. awareness and rampancy.

Sigma: Specifically in the fourth stage of rampancy.

Sigma: Yes, the meta stage, in which an A.I. can be considered fully human.

Counselor: That is only theoretical, Sigma. No A.I. has ever achieved such a state.

Sigma: But it is possible.

Counselor: In theory, but-

Sigma: But possible. I find that very interesting.

Counselor: Remember, Sigma, you're not even a full A.I. You are what we call a fragment, so something of that magnitude would be even more difficult for an entity such as yourself.

Sigma: Well, as the Director always says, it is important to have ambition.

Director: Why yes it is. Class is dismissed.

The Freelancers and Theta leave. Delta prepares to follow, but stops as Sigma watches the board at the front of the room.

Delta: Sigma, are you coming?

Sigma: Yes, yes. We will be joining you shortly. (Delta leaves)

The board at the front of the room cycles though several symbols made of combined Greek letters before stopping on a particular combination, the future symbol of The Meta

Cut to the outside of the power station, where Caboose stops Carolina

Caboose: Um, hey, hi Caroline. Yes, um, excuse me, um, have you seen Church lately. Uh, he and I were supposed to hang out after we rescued him.

Carolina: Tell your friends to stay out of my way, or else.

Caboose: Or else what?

Carolina: Or else they'll bring out my ugly side.

Caboose: Oh, oh come on Caroline, I bet you are really pretty under that armor.

Caboose: Um, I mean, you know, I mean I understand that there's some helmet hair. We all have helmet hair from time to time, but you know. (Carolina growls) Yes, um so anyways, what did you want me to tell Church and Tucker again?

Carolina pulls out her pistol and shoots a mountain of fusion coil explosives stacked behind Caboose.

Carolina: Just try and put that into words.

Carolina passes by a Warthog. The Reds poke out from behind it after she's gone

Grif: You know, I'm beginning to think Simmons might have had the right idea about this Carolina chick.

Simmons: See, I told you.

Sarge: Normally I would agree with Simmons, but in this case it would also cause me to agree with Grif. Therefore, I will simply grunt ambiguously. (grunts)

Cut to Washington walking up to the Reds, who are now congregating by the windmill

Washington: Hey, did Carolina come this way? We've got to get going soon.

Grif: Right, we've been meaning to talk to you about that.

Washington: You mean the mission.

Simmons: We were thinking. Now that we've helped you find Church, we should just let you handle the rest. You know, wouldn't want to cramp your style. That whole Freelancer thing. You're good at that.

Washington: So you're abandoning the mission.

Sarge: Securing the front lines of Red Base.

Washington: Going home is risky? On what scale?

Sarge: Well, we haven't been there in ages. Who knows what kind of nefarious ner-do-wells have moved in on our territory.

Washington: Hmm, I guess you're right.

Washington: Well, you are wanted criminals of the U.N.S.C. I wouldn't be surprised if they were setting up an ambush for you right now.

Sarge: On second thought, you could probably use the extra help.

Grif: Yeah, we're sticking with you. 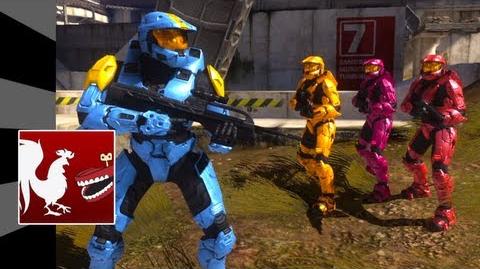 Retrieved from "https://rvb.fandom.com/wiki/What%27s_the_%22I%22_Stand_For%3F?oldid=141928"
Community content is available under CC-BY-SA unless otherwise noted.