We Must Rebuild is the sixth episode of the third season and the forty-fourth of The Blood Gulch Chronicles.

Exploring the wasteland in the future, Grif, Simmons, and Tucker discuss various Hollywood post-apocalyptic clichés. The group finds a jeep and bickers over it. Tucker is bent on finding Church, but Sarge asserts that Church, along with the group's enemies, have died in the explosion. Meanwhile, a cackling O'Malley discovers Lopez's disembodied head on a beach.

Fade in and pan down to Grif and Simmons and Tucker.

Grif: They destroyed it all, Simmons, those damn stupid bastards. They blew it all up! Damn them! Damn them to Hell! Those damn dirty apes!

Simmons: Calm down Grif, we don't know that the whole world is like this.

Grif: Yes it is, they destroyed it all. I guess the society of men just wasn't meant to survive.

Simmons: Hey how 'bout this: how 'bout we explore, more than two square miles, before we jump to any conclusions.

Grif: It was definitely nuclear weapons, that's what did it. And the explosions caused massive power outages which caused the failsafe to fail, which released a super bacteria from a secret lab.

Grif: That caused a huge plague, and as the victims died, they rose from the dead twelve hours later to roam the Earth and feast on human flesh.

Grif: A handful of gritty survivors from all walks of life were able to keep the legions of the infected radioactive undead at bay, using only their wits, and an inexplicable comprehension of agricultural science and engineering. Everything was looking good... and that's when the meteor hit.

Simmons: I think you just quoted every crappy Hollywood apocalypse movie ever.

Tucker: Naw. Hollywood doesn't understand apocalypse. They think that just one thing from everyday life goes away and that changes everything. Like in Road Warrior it was gas, and in Waterworld it was land.

Simmons: What went away in The Matrix?

Grif: I thought the missing element was plot.

Tucker: I'm talkin about Matrix One.

Grif: Face it Simmons, the age of man is done.

Simmons: If all that happened, then were are the zombies? Why aren't they still around?

Grif: The meteor killed them!

Simmons: And what about the super bacteria?

Grif: It was infected by alien bacteria brought by the meteor, and was wiped out in a massive bacteria on bacteria plague. Very ironic.

Simmons: Okay, then why haven't we been infected by the new alien bacteria?

Grif: It only infects other bacteria. Are you even listening to me?

Tucker: Do you guys ever get anything done, or you do you just stand around and talk all day?

Grif: We don't get paid enough to do stuff.

Tucker: But what about Church, idiot? How're we gonna get him from the past to the future?

Grif: I guess he can just wait. That's how it usually works.

Tucker: But when he gets to the present, he'll just be destroyed like everything else.

Simmons: Well, he'll just have to fix it on his own then.

Grif: And if he's successful, he'll get to live through the coolest apocalypse of all time!

Cut to Donut and Caboose standing next to what seems at first glance to be a jeep, but could really be anything in the future day and age.

Caboose: Look what I found.

Donut: I found it!

Caboose: Look at what I took credit for finding.

Sarge: A-mazing that these two actually accomplished something.

Grif: It looks like some kind of an alien transport mechanism that could be used to-

Grif: You have no imagination.

Sarge: Hmmm, let me see if I can get this thing working.

Simmons: How? There's no parts. And what're you gonna use for fuel?

Sarge: Grif was right, Simmons. You don't have any imagination.

Sarge: Shut up, scumbag, we're not having a moment.

Sarge: He's dead, son. Why haven't you given up hope yet and just moved on.

Tucker: It's only been a couple of hours!

Sarge: Well this should make you feel better. When his body blasted in to smithereens, at least he took all our enemies with him.

Cut to a beach, with a sign saying "Danger: No Swimming" with a picture of a shark on it. 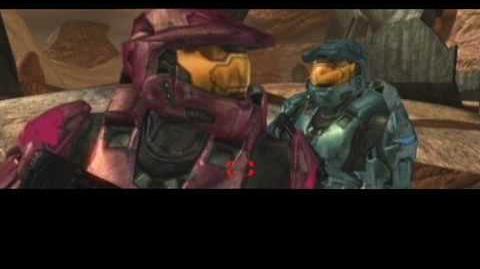 We Must Rebuild
Original 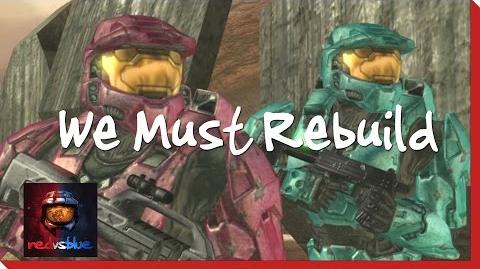 We Must Rebuild - Episode 44 - Red vs. Blue Season 3
Remastered
Add a photo to this gallery
Retrieved from "https://rvb.fandom.com/wiki/We_Must_Rebuild?oldid=135633"
Community content is available under CC-BY-SA unless otherwise noted.