We're Being Watched is the eighth episode of the third season and the forty-sixth of The Blood Gulch Chronicles.

Having moved into the fortress, O'Malley, Doc, and Lopez repair the turret emplacements and meet the Red Zealot, who believes that he has found a holy temple. Exploiting The Red Zealot's religious fervor, O'Malley deceives him into performing menial tasks for him. O'Malley then catches a glimpse of Tex, who is spying on him, but on subsequent glances, sees nothing.

Elsewhere, Sarge, Grif, and Simmons discuss the results of Grif and Simmons' failed reconnaissance, and, while attempting to push the Warthog out of a ditch, receive a transmission from Tex informing them of O'Malley's location.

Fade in on Doc/O'Malley behind a turret.

Doc: I still say a flowerbox would have been a bit more neighborly.

O'Malley: Oh shut up you fool!

Doc: Hey, we should start a neighborhood association. It's just like a government, but run by housewives and old people. So it's a lot more efficient at controlling your lives.

O'Malley: Get out of my head!

Doc: Technically it's my head. But I don't mind sharing. Don't you remember that talk we had about sharing?

Cut to a strange red soldier running toward ...something.

Red Zealot: At last! My pilgrimage is over! I have reached the promised land!

O'Malley: (running to the ledge, through the fan) Who is that. Oh no. Not this buffoon! How did he get here?

O'Malley: Hellooooo. What do you want?

Red Zealot: The disembodied voice of God! (kneels) I hear you Holy One! I have made it to the temple and await your command!

Red Zealot: Oh. Greetings! Are you the gatekeeper of the temple?

Doc: Us? No, we just moved in. Can you help us move a couch? And do you know any good restaurants nearby?

O'Malley: Just a second. (To Doc) Listen you fool, let me handle this.

Doc: I don't know, you haven't been the best choice when it comes to making friends. Maybe I should try.

O'Malley: Nonsense! With the proper handling, this fellow will make an excellent stooge. And I'm the one here with the most experience training Stooges. Isn't that right, Lopez...

Doc: Okay, you can handle this, but I get to hang my motivational posters in the living room. Hang in there kitty!

O'Malley: Fine. But I'm telling you that cat will never make it to Friday. (To courtyard) Yes, I am the guardian of the temple. What do you want?

Red Zealot: I have travelled great distances, in search of enlightenment!

O'Malley: Reaaally, that's perfect. We have tons of that in here, but listen. We just can't let anyone in who wants to get in, so goodbye.

Red Zealot: Wait! I will do anything. Just tell me what I need to do to gain entrance.

Doc: Psst, ask him what he knows about gardening.

Lopez: Pregúntale si podemos tener sus hombros. [Ask him if we can have his shoulders.]

Doc: Maybe he knows how to use that computer we found.

Lopez: Hazlo más despacio. Lo vas a arruinar. [Tone it down. You're going to blow it.]

In the distance, someone hides behind a pillar.

O'Malley: What was that? (turning away slowly) Hmm... (turning back quickly) Aha! Heh? (turning away) Hmm, a-ha! ...Minding my own business, slowly walking away and HAA, I got you! (turns around). ...Oh forget it.

Cut to Simmons and Grif walking by a convenient skull.

Sarge: Did you find something? Wait a minute, where's the jeep?

Sarge: Grif... I just built that jeep, I don't want to hear that it's been destroyed.

Grif: Oh, well then maybe I should stop talking. Or you can stop listening.

Simmons: Nonono it's not destroyed Sarge, the engine just quit.

Sarge: And what exactly were you doing when the engine died?

Grif: Duh, getting the jeep outta the ditch.

Sarge: What was the jeep doing in a ditch?

Grif: Well I can tell you what it wasn't doing, and that's re-enacting the coolest scene from The Dukes of Hazzard ever.

Simmons: No I wasn't, I was holding the arrows and the dynamite!

Cut to the three of them looking at the jeep.

Grif: It runs on gas?

Sarge: Of course not moron, where are we gonna get gasoline? I modified the fuel cells to utilize a form of cold fission, powered by solar energy.

Simmons: So then why is it dead, sir?

Grif: Well I can tell you what we weren't doing...

Sarge: Ah, forget it. Come on, help me push this thing in the sunlight. One, two, three!

Sarge and Simmons push the jeep, Grif faces the other way and doesn't help at all.

They all push it in to the sun.

Sarge: Grif, what happened to this fender?

Grif: It was like that when we took it out!

Sarge: And where's the hubcap?

Sarge: I gotta buy those in sets of four, numbnuts.

Simmons: The jeep's getting power.

The jeep gets power, just like Simmons predicted, and that same stupid song starts playing.

Sarge: Turn that crap off.

Tex: (over the radio) Come in, does anyone hear me? Over.

Sarge: What the, who's that?

Tex: (over the radio) This is Freelancer Tex, looking for anyone from the Blood Gulch Outposts, do you read. Over.

Grif: It's that mean chick from the Blue Team.

Simmons: Hang up on her.

Simmons: Where is she?

Tex: (over the radio) They seem to be holed up in some kind of a fortress. I'm not sure how I got here or how they built it, but if you can read this, I need you to get to me as fast as you can.

Grif and Simmons talk over her transmission.

Grif: Maybe we could use the radio to triangulate her position.

Simmons: How? We only have one radio. We would need a third point to triangulate.

Grif: Okay, well let's just pick a point between her and us.

Simmons: What? That's not a triangle you idiot, that's a line!

Grif: Right, a line that we'll follow straight to Tex! It's the perfect mathematical plan!

Simmons: Hey Grif, why don't you just stick to criticizing other people's ideas, instead of coming up with your own.

Grif: It does seem to be my talent.

Sarge: I could simulate a third radio by using some of this sand, and the heat from the jeep's tailpipe to make an enormous refractory lens. And then-

Grif: Or we could just listen to the coordinates she's sending.

Tex: (over the radio) My coordinates are two two niner delta, by one point three seven gamma.

They talk over her again.

Simmons: Uh yeah, we could do that too. ...What's wrong Sarge?

Simmons: You really wanted to make the lens, didn't you.

Simmons: Well we can make it later, when we have more time.

Tex: (over the radio) I need you guys to come right away. Or better yet, send someone who can fight. 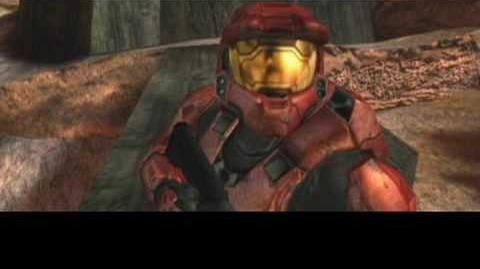 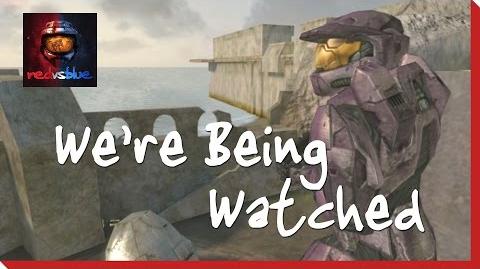 We're Being Watched - Episode 46 - Red vs. Blue Season 3
Remastered
Add a photo to this gallery
Retrieved from "https://rvb.fandom.com/wiki/We%27re_Being_Watched?oldid=135635"
Community content is available under CC-BY-SA unless otherwise noted.