Visiting Old Friends is the second episode of the third season, and the fortieth of The Blood Gulch Chronicles.

In an unknown location Wyoming, another Freelancer, interrogates Phil, but is interrupted by a phone call hiring him for another job. Meanwhile, still in Battle Creek, Sarge and Caboose steal the Red and Blue flags in an attempt to coerce the teams to help them find their way out. When that fails, Caboose recalls O'Malley's possession to unleash his angry side, and single-handedly eliminates both teams. Simmons then retrieves them to the Teleporter Nexus via a teleporter.

Simmons: Okay, let's see, if I wire this thing in to that... maybe I could signal boost on that thing there... I might just be able to get that to work.

View through the teleporter to Sarge and Caboose shooting

Sarge: Caboose, Caboose, keep them away from me! Get that one. And that one. No no, the one with the limp! Get 'im!

Simmons: Sarge, is that you?

Simmons: Caboose, can you hear me!?

Caboose: Yes, I heard you Sergeant.

Sarge: I didn't say anything, numbnuts.

View is solidly in Battle Creek

Sarge: Caboose, we have to break this neverending cycle of attack and retaliation, either by A) convincing the two sides to live in peace, or B) by getting ourselves completely involved, and kicking some serious ass! I vote B.

Caboose: I know. I just wanted to be the one with the plan for once.

Sarge: Hgggh, come on. I have an idea.

Black screen: "meanwhile, somewhere else in the galaxy" Fades in to a hallway

Wyoming drops behind Phil, and he turns around

Phil: What was that? Nothin', just that stupid, sucky wind. Breaking a twig, coming up behind me and... breathing, real heavy. (turns around) What the?

Wyoming punches Phil in the face, knocking him out. Fade in a random amount of time later, Phil on his knees at gunpoint

Wyoming: Splendid, that's the attitude old chap. Now, first question. Where are you hiding the plans?

Wyoming: Mhm, ahem. Right. Where, are you hiding, th-... right. Need to get that, one second. (turns around and answers the phone) Hello? Yes, this is he speaking. ...Oh hello! Yes, right. Oh bugger. Spell that with a T or an F, do you? Thought you said something else. No, I'll get right on it.

Wyoming: Right. Usual fee... He won't be a problem. No, I'll nip that one for you straight away. Right. Say hello to mum for me. Cheerio. (turns back around to Phil) Now, where were we. Ah yes. Looks like it's your lucky day, mate.

Wyoming: Don't have time to torture you, so I'm just going to have to kill you.

Black screen, gunshot, fades back in to the Battle Creek Reds in their base

Some Other Red Soldier: We must protect this house!

Many Red Soldiers: We must protect this house!

Yet Another Red Soldier: We must protect this house! This is our house!

Another Red Soldier: No.

Some Other Red Soldier: The flag is gone?

A Red Soldier: What will we do?

The Red Soldier Who Briefly Held The Blue Flag In Episode 39 (The Red Zealot): If the flag is gone, who will lead us? Who will inspire us with their shiny pole? Who will flag directions to us in battle? We are lost, and the world as we knew it is gone forever from our eyes, only to live in our memories as the days of salad and glory! Truly these are the end of times! Repent! Repent!

The Other Red Soldiers: ...

The reds and blues run slowly from their bases, very uninspired

They meet in the middle, below Sarge and Caboose

Sarge: (holding the blue flag) Oh blue team... Look what I have.

Caboose: (holding the red flag) Oh blue team... Look what, wait, I messed up my line. Let's start over.

A Red Soldier: They have our flag!

A Blue Soldier: No they don't, they have our flag!

Sarge: Listen you morons, you're gonna have to work for us now.

The Red Soldier: What's in it for us?

Sarge: Help us get out of here, and we'll give you back your flags. Then you can go back to senselessly killing yourselves.

A Blue Soldier: Wait- why don't we just kill you guys and take the flags back?

Some Red Soldier: Oh, you got owned. I saw it, fucking owned!

Some Red Soldier: Shut up! Teams are fine!

Reds and blues start firing at each other ...again

Caboose: Wait. I can make them listen. I can beat them.

Sarge: Son, what are you talkin' about?

Caboose: O'Malley taught me how to be mean. (concentrating) I, just, have, to, concentrate, on, bad, things. Like, milk. No wait, red, Red, Bull.

Sarge: Son, I think you've really lost it. O'Malley's not in your head any more, he infected the Doc!

Caboose: No, I can feel him. I just need to get angry, and say, mean, things! Like... uh... Your brain is a mountain of hatred!

Sarge: I never thought I'd reach the moment in my life when I actually missed Grif... but here it is.

Caboose jumps down from the cliff in to the battle, doing a dramatic gutteral yell on the way down that sounds, ironically, like when you grunt in the bathroom

Caboose: (in a voice remeniscent of O'Malley) My name, is Michael J. Caboose! And I, hate, babies.

The Red Zealot: It's the beast! The anti-flag, come to live among us and rule us for seven years! The end is nigh!

Caboose punches him in the face, knocking him down

A Blue Soldier Caboose Punches And Knocks Down: Yikes!

A Red Soldier Caboose Punches And Knocks Down: Yowsah!

Caboose shoots down a red, then a blue, then a red

Sarge: Great Gustavo, what's goin' on down there?

Simmons fades in in apparition form behind him

Holographic Simmons: Sarge, Caboose can you hear me?

Holographic Simmons: I reconfigured the teleporter, to allow me to communicate with you. I need to get you guys outta there.

Sarge: Damn right we need to get outta here.

Holographic Simmons: Get to your teleporter, and I'll see what I can do from here.

Holographic Simmons: It's really great to see you again.

Sarge: Oh kiss my ass some other time.

Holographic Simmons: Whatever you say, Sir.

Sarge climbs down the ladder and runs for the base

Sarge: Come on, Caboose, before they wake up again!

Caboose: I will eat your unhappiness.

Revelee starts playing in the background

Simmons: Just give me a few more seconds over here, Sarge.

Sarge: We don't have a few more seconds!

Simmons: Stop pressuring me! I rely on you for love and support!

Caboose: Your toast has been burned, and no amount of scraping will remove the black parts.

Simmons: Okay there, come through now!

They run through the teleporter, and the camera conveniently follows

Sarge: Simmons, you get an F in efficiency. But I have to give you an A+ in dramatic timing.

Simmons: Thank you Sir. I've always felt that presentation is what matters most.

Caboose: What happened? The last thing I remember was a very mean kitten. And then we were in this janitor's closet. And my throat hurts, a lot.

Simmons: What was that weird place, Sarge?

Sarge: Simmons, I have absolutely no idea.

Cut back to Battle Creek

The Red Zealot: Well I guess it's back to basics, now! Get ready for destruction, blues! We're gonna kick your ass! We have become death! Destroyer of whe- oh wait, hold on. I gotta take out the trash. I'll be right back. 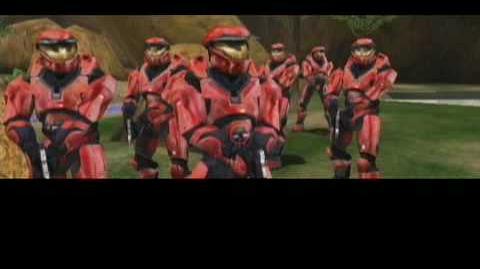 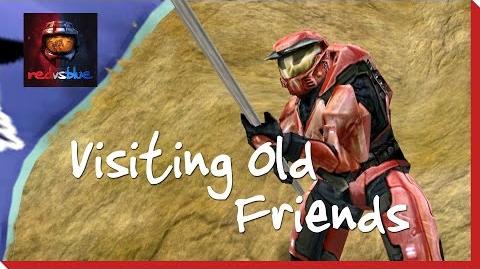