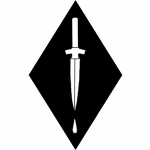 Hi, welcome to Red vs. Blue Wiki! Thanks for your edit to the C.T. page.

One thing, how does the demo man not die from getting shot 7 times, shot in the face with a MAC round twice, a building collapsed on him and he fell off the cryogenics research facility but he dies from drowning...

About the Councilor and the New Republic tags Edit

As he said on my page, a different admin actually made the tags but I can explain it somewhat. See, the Wikia Corps designed Wiki's to have several levels of administration with the four biggest being the following:

Beurocrate - These guys can pretty much assign new Admins and the like but that's about it. They don't have any othe real Admin powers. I think they can also remove Admins.

Mod - Can ban and unban users and often can undo mass edits. On some wiki's this is strictly for the chatroom.

Rollback - Someone with this tag can undo a mass edit on a page. Makes it easier to fight spaming is all.

Admins can make custom tags, I can't recall how but there are plenty of guides on it so instead of having an Admin or a Cratic tag, on this wiki they seem to have New Republic and Councilor respectivly. Chibifoxkit (talk) 11:23, April 22, 2016 (UTC)

It doesn't matter how many edits you have, nobody looks at that number and says "golly gee they have so many edits that guy must be great" (unless that matters to you I guess). All the number really does is show how long/active you've been here. Like I have around 2k edits but I'm pretty sure the majority of those just involve me being an asshole. If you want to be "trusted" or something, just make good edits the first time. It's not that hard. ♠₩€$₮€₢₦ ϭ€№♠ 07:06, May 6, 2016 (UTC)

Retrieved from "https://rvb.fandom.com/wiki/User_talk:Archer_41?oldid=114623"
Community content is available under CC-BY-SA unless otherwise noted.