Under the Weather is the sixteenth episode of the fourth season and the seventy-third of The Blood Gulch Chronicles.

At Blue Base, Tucker becomes ill. Church and Caboose discuss Tucker's sickness, which apparently he caught when the Sacred Quest team stayed overnight in the Great Swamp. Church suggests the sword's power source could be giving off radiation. Church and Caboose have a reasonably light and friendly discussion regarding the nature of the sword, as Tucker rolls in pain. This friendly discussion even extends to Church mentioning that he would love to "live in [Caboose's] world for about 10 minutes" just for fun.

At Red Base, Simmons persists in trying to enter to relay vital information about the war to the Reds. However, he still meets resistance from Donut and Grif until he unrealistically quickly changes out of his mostly blue armor to his original maroon armor. Apparently Simmons learned this ability because of his extreme shyness, which has led him to never use the base's toilet for the past three years.

Back at Blue Base, Church and Caboose question Andy on what might be causing Tucker's sickness and suggest that he, being a machine (and thus not able to get sick), go into the base, find out what is wrong with Tucker and report back. Since Andy is a bomb, the only solution he can provide is to blow up the base with Tucker inside, killing all the germs and everything around the base in the process. Finally, out of frustration, he tells Church and Caboose that if they want a medical diagnosis, they need to find a doctor. With that, Caboose tells Church, "Please don't do it."

O'Malley and Lopez bicker over who should pick up the telephone that is ringing inside their secret lair, while Doc decries their bickering. It appears that all three have survived their encounter with the Alien and that O'Malley has continued in his pursuit of taking over the universe. It would seem from Lopez's attitude toward O'Malley that all those attempts have failed miserably, and this has caused Lopez to become quite cynical and disrespectful toward him.

Fade in to Blue Base, with Tucker moaning

Caboose: Yeah, he's been like that since the swamp.

Church: Swamp? You guys were in a swamp?

Caboose: Yeah. It was dark and swampy. I wasn't scared at all.

Church: Is this why you guys came home so fast?

Caboose: No, we came home because the alien died, and because the uh glowing sword turned out to be a, uh, glowing key.

Church: Yeah, a glowing key that can still stab people.

Church: So it is a sword. It just happens to function like a key in very specific situations.

Caboose: Or it's a key all the time, and when you stick it in people, it unlocks their death.

Church: God damn man, I would love to live in your world for about ten minutes.

Caboose: Yeah. I have a really good time.

Church: Ehehehyeah, it seems like it. You know I don't think I'd get anything done, but I probably wouldn't care that much.

Tucker: Ohh, why don't you guys come in here?

Church: Uh, because it might be contagious? Aaand because we've got to think about the health of the unit as a whole. I came up with that pretty fast.

Caboose: And because you threw up ten minutes ago! And that's just gross!

Church: Hey wait a second, you don't think that sword-

Caboose: You mean the key?

Church: No I mean the sword. You don't suppose that sword is makin' him sick, do you?

Caboose: I don't see how, it hasn't sneezed once.

Church: We don't know anything about it though. Maybe it runs on radiation and it's poisoning him.

Caboose: Or, maybe it runs on solar power!

Church: Wait now- why would solar power make him sick?

Caboose: ...Is he Republican?

Cut to a great view of Blue Simmons through the opening of the ramp, flanked by Grif and Donut

Simmons: Okay, listen guys, do you want important information about the war or don't you?

Grif: I don't know man, this is a pretty exclusive club we've got here. If we let one blue guy in, we might have to let the next one in, and the next one, and then there goes the neighbourhood.

Donut: Yeah, pretty soon we'll have to let in women. And who wants them?

Grif: Hhyeah, then we'd be talking about interior decorating and reality T.V. shows all day. No thanks.

Donut: Grif, it kinda ruins my point when you just mention the good stuff.

Simmons: I'm sure the Blues are using the information right now to plot an attack against us.

Cut to Blue Base, Tucker vomiting all over

Church: That better have been in your bucket!

Caboose: I'll get the mop.

Cut back to Grif et al

Grif: Well you can forget it. You heard Sarge, there's no way we're letting you in the base dressed like that.

Donut: Seriously, the blue and red thing is so last year.

Simmons: Well how 'bout this?

Grif: How did you change so fast?

Grif: Is that why you wear your underwear in the shower, too?

Simmons: I also never use the bathroom at the base. Only at home.

Grif: Dude, we've been stationed here for like three years.

Simmons: Yeah, it's gonna be a very eventful homecoming.

Cut to Church looking down at Andy

Church: Andy, what in the hell happened to Tucker in this little adventure you guys took?

Andy: How should I know?

Caboose: He ate all my food and just threw it up. Coulda just thrown it on the floor, 'n' cut out the middle man.

Church: Yeah, plus now he's moody as hell. I went to ask him if he's feelin' better and he practically bit my goddamn head off.

Caboose: I bet he just would have thrown up your head later. And then you could just put it right back on, it'd be fine.

Andy: He was fine on the trip, maybe he's allergic to you. I know I get nauseous when I look at ya.

Caboose: I'm pretty sure that didn't actually happen. I would have remembered that part.

Andy: Aw come on, you're surprised he's sick? I've never seen the guy wash his hands, not once! One time I saw him pick his nose at the pay phone.

Church: I'm just worried, man, who knows if this stuff is contagious? For all we know Caboose could be next. Wake up tomorrow morning he's throwin' up, runnin' a huge fever, next thing you know he's bleeding out of his eyes 'cause his internal organs are liquifying. And I'm gonna be the one that has to hold his hand while he screams himself to death. That's not gonna be any fun.

Church: Oh don't bother, it's too late for you anyway. We need to start thinking about me.

Andy: Tell ya what. Send me in, and I'll run clean-up. Don't worry about it, I'll take care of everything.

Church: Andy, I am not letting you blow up the base.

Caboose: But then Tucker will be dead too.

Andy: See? It's the perfect plan!

Church: No, but that does give me a good idea. Technically, you can't get sick. So why don't we send you in there to take care of Tucker, you can figure out what's wrong and report back to us.

Andy: I ain't no nurse. I go in there, all you're gonna get, is an explosion. You want a medical diagnosis, go see a doctor.

Church: What did you just say?

Andy: I said you don't need me. Ya need a doctor.

Caboose: Please don't do it.

At an evil lair, somewhere nearby...

The sound of a phone ringing

O'Malley: For the love of evil, someone get the phone!

O'Malley: You fool! Can't you see I'm busy with an evil plot? What do I pay you for?

O'Malley: Oh shut up you fool. You don't even have a body.

Lopez: Sí. Debido a uno de sus planes fallados. [Yes. Because of one of your failed plots.]

Doc: Why all this bickering? Can't we all just get along?

O'Malley: And answer the damn phone!

Lopez:¿Por qué tenemos un millón de máquinas apocalípticas y no un contestador automático? [Why do we have a million doomsday devices and no answering machine?]

O'Malley: I find you far too sarcastic for just a head. 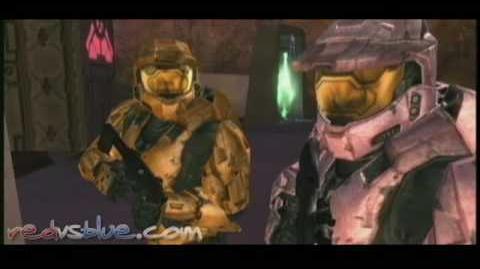 Under the Weather
Original 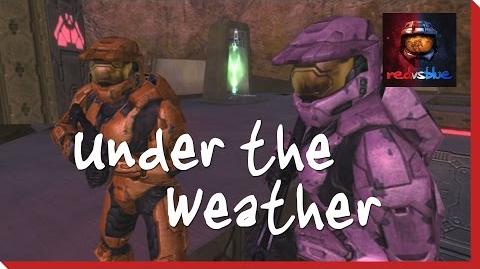 Under the Weather - Episode 73 - Red vs. Blue Season 4
Remastered
Add a photo to this gallery
Retrieved from "https://rvb.fandom.com/wiki/Under_the_Weather?oldid=135659"
Community content is available under CC-BY-SA unless otherwise noted.