Inside the Freelancer Offsite Storage Facility, Carolina charges at the robotic Tex drones and attacks, using her skill and weaponry to her full advantage. However, her obsession to defeat Tex, as well as reminiscing about her failures in the past, cause her to eventually become overwhelmed by her enemies. Epsilon's coordination is also jarred from the intensity of the fight and he is unable to assist her. Carolina breaks down and laments that she can't and never will beat Tex.

As the drones begin to surround Carolina, Donut suddenly destroys them with several plasma grenades. Wash helps Carolina, who is surprised to see that the Reds and Blues have returned, to her feet. As the robotic drones begin to regroup, Carolina, with her morale restored, orders the teams to "lock and load". In order to even the odds, Epsilon manually angers Caboose into smashing through the robotic army. Carolina, Wash and the rest of the Reds and Blues follow suit and lay waste to the majority of the robots, but slowly become overwhelmed. Wash tells Epsilon to find the real Tex so he can shut down the army.

As a result, Epsilon enters a data storage unit where Tex is being kept. He finds her in a similar predicament to Alpha's state many years ago; Tex has been so broken down that she doesn't recognize Epsilon or have any remembrance of her own name. Epsilon reminds her of their relationship and comforts her, telling her to rest, to which Tex wearily, but happily complies. Epsilon then says goodbye, to which Tex recalls that she has always hated goodbyes.

Back in the facility, all of the Tex drones shut down as a result of Epsilon's actions. The Reds and Blues take a moment to savor their victory, but Wash grimly reminds them that they still have to deal with the Director. Epsilon, however, replies that he and Carolina must complete the final objective of their mission alone.

The army of Tex drones face down Carolina and Epsilon. They slam their fist into the hands and crack their necks with robotic noises. One of the drones walks up and does the same action.

Tex Drone: You have no idea what kind of trouble you are in.

The army of Tex drones charge. Carolina fires her rifles at the approaching army, mowing down the first several drones.

Carolina looks to her left and flips backwards, dodging a drone's attack, dropping her rifles and pulling out a shotgun. A drone flies at her with a flying kick but Carolina blasts it out of the air with her shotgun. She lunges forwards, leaping off the top of the heads of several drones and into the fray. She lands on another drone and skids across the ground on it as she proceeds to blast the surrounding robots.

Carolina backflips off the drone she was standing on, flash kicking another. The other drones attack her but she manages to hold her own and blow them away with her shotgun. Finally, one of the drones punches her gun out of her hands and Carolina switches to hand to hand combat. She takes out another three and throws the fourth into a nearby crate.

The crate is dented by the impact, and the one stacked on top of it falls to the ground. It splits open, revealing its cargo of frag grenades. They spill over the floor, tripping over several drones. Carolina rolls away and regains her footing. She looks down, and kicks a grenade up, and into a approaching drone. Carolina then pulls out her grappling gun and fires at the grenade. She twirls the grenade around, the metal sphere taking out several more drones. She then slams the grenade into the ground, detonating it and causing the other grenades to explode, sending even more of the robots flying. Out of the flames, a drone leaps forward.

The drone rams Carolina, sending her flying and causing her to lose her grappling gun. She gets up on one knee.

Carolina: Could you be a little more specific?

Epsilon: Yeah, uh, sorry, Carolina, but, seeing this many ex-girlfriends in one room kinda has me terrified beyond the capacity for rational thought.

Carolina: Well, snap out of it!! I need you!

Carolina powers her speed unit up, and takes off.

Carolina sprints to the end of the room, and spins around, taking out more drones.

Epsilon: Carolina, I don't think I can do this much longer!

Carolina dashes out of combat for a moment.

Epsilon: Seriously! You need to slow down!

She dashes back in and engages the drones. With her speed boost, she begins tearing through the oncoming drones.

Carolina: I can do this!

Carolina furiously smashes through the robots, ignoring Epsilon's protests while the voices of the Freelancers echo in her mind.

Carolina charges forwards in an attempt to just plow through all the drones.

York: (flashback) She doesn't know how to stop.

Carolina stumbles out of the crowd of drones and rolls forward before regaining her footing and charging toward another group of robots.

Epsilon: Get a hold of yourself!

Carolina leaps past the drones but but is clothlined by one near the back and is sent flying into a crate before hitting the ground.

Epsilon: Come on, get up!

Carolina looks at the army of drones.

Carolina: I could never beat her.

Suddenly, out of nowhere, three plasma grenades stick to three drone's heads. Carolina looks for the thrower, who is revealed to be Donut. He stands alongside Grif and Sarge.

Carolina runs and rolls out of the blast. The grenades explode, sending the drones flying. Carolina skids to Wash's feet. Wash extends his hand.

Carolina: What are you doing here?

She takes Wash's hand, and is hoisted to her feet.

Washington: I told you they're not so bad once you get to know them.

He gives her a Magnum. The rest of the Blood Gulch soldiers stand at the ready. Epsilon appears beside Tucker.

Epsilon: Oh. I thought this wasn't your fight.

Sarge: Come on, overwhelming odds with little to no chance of success? How could we resist?

Tucker: You got a problem with that, Church?

Epsilon: Guys, I am an asshole. I admit it, and I will gladly accept any and all smart-ass remarks after this is over. But I'd like to point out the fact, that we're standing in a room full of crazy Freelancer robots that are ready to completely and utterly fuck our shit up.

The Reds, Blues, Wash and Carolina, ready their weapons. Epsilon appears beside Caboose, who is facing the wrong way.

Epsilon: Caboose, I need you to get a little angry, okay buddy?

Caboose: Okay. Yeah, I don't remember how to do that.

Epsilon jumps into Caboose, who turns around to face the drones. He charges into the army, sending many of them flying. He rolls and stands up triumphantly.

Caboose: (in deep voice) My name is Michael J. Caboose. And I...

He slams his assault rifle into an approaching Tex.

Caboose continues taking out the drones. He uppercuts one and sends it flying into the air. He drops kicks another and sends it plowing through the other robots. He grabs one by the legs and swings it around before letting it go and crash into the other drones. Finally, he stands.

Caboose: (in deep voice) That too! (fires Assault Rifle)

Washington: Come on, everyone! Now's our chance!

The group starts running towards the Tex drones.

Sarge: For our ancestors' ancestors! Attack!

The group charges into the fray. Carolina leads the charge with a flying sidekick while Tucker rushes forwards and begins slashing through the drones with his sword. The others soon join them, firing at the army of robots while Caboose continues running through the room, plowing through the drones. Together, they slowly begin to push forwards.

A drone approaches Donut and he starts whimpering. Washington comes in and quickly takes out the drone.

Grif blasts a nearby drone but another pair knock him down and opens up his legs. A trio of drones attempt to follow up with a piledrive into his groin, but Carolina intercepts them, kicking them out of the air. The duo lets go of Grif and attack Carolina, one of them punching in the face and the other one knocking her back with a jumping front kick. Tucker slides in and dispatches them both. Grif stands up but a drone punches him in the groin, sending him flying backwards so another one behind him could follow up with a kick to the same spot and knock him away.

Tucker: Oh come on! You had to see that coming.

They rush to rejoin the group, who are now surrounded in the middle of the room. With their backs together they continue fighting off the seemingly endless horde of robots. The Reds and Blues seem to be holding their own but the drones keep coming.

Simmons: It's not working! There's too many of them!

Washington: Epsilon, do you remember how the Alpha was able to stop the Meta?

Epsilon: Yeah, but that was one guy. Not a hundred.

Washington: There's only one Tex. And Church...nobody knows her like you.

Epsilon: Alright, stand back everybody. This is going to get a little...personal.

Epsilon splits himself up into hundreds of copies and enters the drones. He meets Tex in a room similar to the one where Tex had talked to Alpha.

Tex: Huh? Who the hell are you?

Epsilon: Your name is Allison. You're Tex.

Epsilon: Let's just say we... we used to be close.

Epsilon: I need you to rest now, Tex.

Epsilon: I thought you might. Uh, look, I have to go now, but... you just rest, okay? Goodbye.

Tex: Weird. I don't know why, but I hate goodbyes.

Epsilon: I know why. (sighs) Goodbye.

The Tex drones in real life start malfunctioning and shut down. Epsilon reappears.

Grif: Uh, you know, you could have done that before I got punched in the nuts by twenty of them at once.

Tucker: Yeah, but where's the fun in that?

Donut: I could have told you that!

Simmons: So... I guess our work here is done?

Epsilon: No. What comes next...

Epsilon looks over to Carolina.

Epsilon: ...Carolina and I need to do alone. 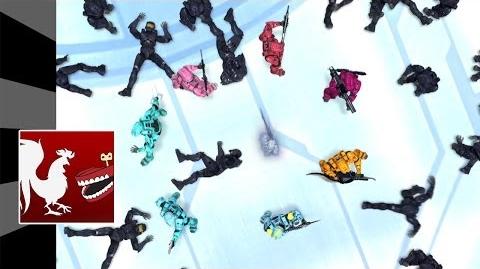 Retrieved from "https://rvb.fandom.com/wiki/True_Colors?oldid=145918"
Community content is available under CC-BY-SA unless otherwise noted.