Think You Know Someone is the nineteenth and final chapter of Recreation. It's also the 153rd episode in the overall series.

The episode begins with Sarge, Grif, Caboose, and Tucker continuing their pursuit of C.T. and Epsilon while Smith and the Aliens close in from behind. C.T. manages to destroy the aliens' vehicle, but Tucker jumps in front of his Warthog and destroys it with his Energy Sword, forcing a wounded C.T. to retreat.

At Valhalla, Simmons, Donut, and Lopez reach the Meta's Warthog but are unable to start it as the Meta closes in for the kill. Simmons tries to use the warthog's gatling gun, but without the warthog's power, he can't move the turret. Lopez soon says that he could convince him to stand in front of it, but Simmons and Donut think that's a stupid idea, not realizing Lopez was being sarcastic. Lopez is then surprised that Donut and Simmons could understand his statement.

At Valhalla, Washington arrives and orders the Meta to stand down, revealing that they are working together. Losing patience, an angry Wash then shoots both Lopez and Donut and tells Simmons to give him the Epsilon A.I. While Simmons tries to revive Donut, the scene cuts to a flashback of Wash and the Chairman speaking. The Chairman asks Wash what he will do if the Blues decide not to give him Epsilon, to which Wash replies, that all his life he has been betrayed and that he can finally put it all aside. He finishes with a short-tempered growl: "What in the hell makes you think that I'm going to ask for it?"

Tucker is screaming, flying through the desert on his vehicle until he crashes.

Pans out to Caboose and Sarge.

Caboose blows up the Mongoose. Tucker casually rolls out of the cave.

Caboose: Tucker, where did you get that?

Tucker: Oh, this is my ride! The aliens gave it to me as a gift. Pretty fuckin cool.

Grif: Did they give you driving lessons too?

Tucker: No, we kinda skipped that part. But it looks awesome.

The scene now moves to C.T. as he's pursued by some of the aliens. He collides with one of them.

The alien crashes into a pillar, losing C.T. He goes to look for him. After a short while, C.T. honks his horn and rams into the alien's vehicle, destroying it.

Caboose: There he is.

Tucker: You guys follow him. I'll cut him off.

Caboose: You always say that, but we always do!

They all split off. Scene cuts to Simmons.

Lopez: Probablemente sacó el motor de arranque. Eso es lo que yo haría.[He probably took out the starter. That's what I would do.]

Simmons: Hmm, it looks like he took out the starter.

Lopez: En serio. Pues, no me jodáis.[Really. Well, no shit.]

Donut: What do we do?

Donut: It's no good. (sniffling) We can't do anything!

Donut: All hope is lost.

The Meta is seen approaching from a distance.

Donut: What are we gonna do without any ammo? We're trapped.

Lopez: No serás lo suficientemente fuerte para girarlo sin energía. [You won't be strong enough to turn it without power.]

Simmons shoots momentarily at the Meta, but it soon ceases fire.

Lopez: (sarcastic) Tal vez podrás convencerlo que se pare enfrente de él.[Maybe you could convince him to stand in front of it.]

Simmons: (hops out of the jeep) What?

Donut: He said maybe you could convince the Meta to stand in front of it.

Lopez: Vamos. ¿En serio? ¿ESO fue lo único que entendió?[Come on. Really? THAT was the only thing you understood?]

Cuts to Sarge, Caboose, and Grif chasing after CT.

Sarge: Caboose, what are you doing back there? Shoot 'em!

Tucker: Only got one shot at this.

Tucker leaps out of the chopper and stands in C.T.'s path. The Warthog fires and comes to a stop.

Grif: Yeah, that's what it is.

Tucker slashes at C.T.'s jeep. It halts and explodes. C.T. flies to the side, but then rises and runs off.

Caboose gets off the Warthog turret and runs towards C.T.'s destroyed jeep.

Caboose: Church! Where are you?

Cut to Tucker running alone atop the temple.

Tucker: Where the hell did he go?

C.T.: Tucker, I should've killed you the second I laid eyes on you. I would've been long gone if you hadn't interfered.

Tucker: (backs up until he is at the edge of the temple) Okay dude, I guess you got me. I've got nowhere to go. Just tell me one thing though, who are you really? And who sent you here?

Church rises from behind Tucker.

C.T.: What in the hell is that thing?

Church: I am not a thing. My name is Leonard Church... and you will fear my LASER FACE!

Tucker: Hoohoo, hell yeah! Dude, you just got fucked up!

Caboose: Wow! Now that was awesome.

Tucker: Church, how did you do that?

Church: I don't really know. I just got really mad and it just kind of, y'know, happened.

Tucker: Can you do that again, like to the yellow guy or something?

Church: I guess... not really sure.

Sarge: I got a bad feeling about this.

Grif: For once Sarge, you and I agree.

Tucker: Look guys, we need to keep our head in the game. Let's get back into that temple and close it down for good.

Caboose: Um guys.....I think we might have a problem

Aliens are surrounding the area below them.

Back at Valhalla, Agent Washington approaches behind the Meta.

Wash: Stand down. I'll take it from here

Wash: I said back off.

Wash: Where is it?

Simmons: Where's what? Why aren't you two fighting?

Wash: The epsilon unit, I know you have it. Give it to me.

Simmons: Wait wait wait, you're working with... the Meta?

Wash: Don't make me repeat myself.

Wash turns to Donut; shoots him. The warthog's window breaks.

Donut: Hey... Simmons? I think he shot me too... (falls to the ground, presumably dead)

Simmons: DONUT, NOOOO! Donut, Donut, are you okay? Come on, breathe, Donut! Breathe! Why did you do that?! What's wrong with you?!

Simmons is still screaming in the background as the Chairman is speaking.

Simmons: No, Donut! Come on, stay with me! Stay with me, Donut! Don't just stand there!

The camera pans closer to Wash.

Chairman: Agent Washington, when you find these blue soldiers that you're talking about, what makes you think that they are just going to give you the Epsilon unit when you ask them for it?

Wash: Heheh, for as long as I can remember, I've been lied to, taken advantage of, shot in the back, and left for dead. And now, I have a way out of all of this. What in the hell makes you think that I'm going to ask for it? 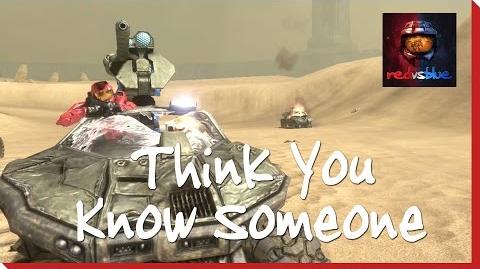 Retrieved from "https://rvb.fandom.com/wiki/Think_You_Know_Someone?oldid=146263"
Community content is available under CC-BY-SA unless otherwise noted.