Things Are Looking Down is the eighteenth episode of the fourth season and the seventy-fifth of The Blood Gulch Chronicles.

The episode begins with Sarge, Simmons, and Grif racing toward the Blue Base. Sarge worries that, since the Blues have re-established contact with their Command, they may be receiving new intelligence, weaponry, and soldiers to aid in their efforts for the war. Grif, however, suggests that the Blue Command could simply be giving the same "generic" instructions that Red Command has been giving the Reds. Eventually the discussion changes gears and the Reds ponder where Donut could be. Simmons spots him standing next to a rock, talking to something. After taking a look through his sniper rifle, Grif sees that Donut is talking with Lopez.

Back at Blue Base, Church introduces O'Malley and Doc to Andy. An awkward moment for O'Malley occurs when Church notes that Andy had originally been designed to kill O'Malley. Andy shouts "kaboom," frightening O'Malley. Church and Andy share a good laugh, while O'Malley is unamused.

Meanwhile, the rest of the Reds gather around Donut and Lopez. Donut reveals that he had taken four years of Spanish in high school, but, from the subtitles provided, he can neither speak it nor understand it fluently. Eventually, after Donut fails to communicate Sarge's request to Lopez, Sarge gains root access into Lopez to force him to play back the message from Red Command stored in his memory. Unfortunately, the message, which actually contains the generic instructions that Grif had mentioned previously, is played back in Spanish. The Reds are at a loss on how to translate the message until Simmons mentions that the Blues had a bomb that could translate the message. Although Grif discourages the idea when he reminds them the bomb can explode via remote detonation as the entire team huddles around it, Sarge decides to retrieve it.

Sarge: Come on, double time men! That goes double for you, Grif.

Grif: Why are we always double timing, anyway? Can't we ever half-time? Or how 'bout no time?

Sarge: No, numbnuts. According to Simmons, the Blues have already re-established contact with their Command.

Grif: What? That's why we're running?

Sarge: Of course. By now they could be receiving reinforcements. Or taking advantage of some new technological weapons development.

Grif: Or maybe their Command has been giving them the same generic orders ours always gives us like, "try to win" and, "do better than you're currently doing." I swear, sometimes I think they don't even know our names.

Sarge: That's just what I wanted you to hear. The conversations I had with Command always provided vital intelligence.

Sarge: And the number of soldiers they have.

Sarge: Also, the location of the base.

Grif: Auh, you already said that one.

Sarge: I meant our base.

Simmons: Weren't we the ones that provided them the intel in the first place?

Sarge: Initially, yes. But Command processes our raw data and gives us back the key details. You may recall they sent us plans of the next phase of the war. They were stored in Lopez before he was kidnapped.

Grif: You mean before he ran away.

Simmons: But how do we even know he still has the plans? Last time we saw him, all that was left was a head. Maybe he stored the files in his legs, or his chest.

Sarge: You idiot, who stores memories in their chest? Don't you know anything 'bout biology? The chest is strictly reserved for digestion.

Grif: Maybe they'll send us more reinforcements like last time. Donut's arrival was a real turning point in the offensive.

Sarge: Where is Donut?

Simmons: There he is. Looks like he's talking to something.

Sarge: I need information on that rock, ASAP! Approach the target via flanking maneouver and establish defilade at that ledge, Point Alpha!

Grif: Or I could just look through the scope of the sniper rifle since that's worked the last eight hundred times.

Sarge: Yeah alright fine, take all the fun out of it.

Grif looks through the scope and sees Donut talking to Lopez

Sarge: I like my way better. It was more dangerous for you.

Grif: Sarge, I have great news. Looks like you're gonna get your plans after all. And I'm not gonna have to do any more running. So everybody wins.

Simmons: What about me? I didn't win anything.

Grif: Oh don't worry about it, I'm sure there'll be somebody's ass you can kiss.

Cut to Church and Doc on Blue Base looking down at the camera.

Church: Andy this is Doc, Doc this is Andy. Uh Andy, Doc is uh he's here to help Tucker. And he's also our worst enemy. You know- besides the Reds. And, Tex on, certain days.

O'Malley: It can talk?

Andy: Why is that the first thing everybody says to me?

O'Malley: A talking bomb, you say... Hmm I could use a fellow like you in my organization.

Church: Yeah, I should probably point out that Andy here was specifically designed to blow up and kill you.

O'Malley: I see... Well this is certainly awkward.

Cut back to the Reds, who have caught up with Donut and Lopez.

Sarge: Lopez? Donut, where did you find him?

Simmons: How were you two talking? Lopez, do you speak English now?

Grif: Well if he doesn't then why did he just say no in English? Busted.

Sarge: What've you two been talkin' about?

Donut: Oh, the usual Spanish fare. I told him my name, I asked him what his name was, I asked if he knew where the bathroom was, how much a ticket for the train costs, and I asked him for the cheque.

Sarge: Allrright he wants to play tough, uh? I built in override codes for just such an event. Lopez! Give me root access, priority Delta One!

Sarge: Ah, bitch about it later.

Caption: Hello, hello. Can you hear me? Hello.

Grif: Oh come on, the recording is in Spanish? That doesn't even make any sense!

Simmons: This guy sounds just like the guy the Blues were talking to, Vic Junior. I'll bet his kids changed sides.

Vic: (continuing in Spanish) After analyzing the data you provided...

Vic: ...we have calculated a fool-proof plan for winning the war.

Donut: Wait, how does Vic have kids? I thought he had a vasectomy.

Everyone looks at Donut, and even the recording pauses

Vic: Here are your orders: eliminate the enemy. Good luck.

Sarge: We've got to figure out what he's saying. Donut, can you translate or can't you?

Donut: Uh I think he's saying something about losing his passport.

Simmons: Well, when I was in Blue Base, Church mentioned they built a translation device out of an old bomb.

Sarge: E-Gads, no doubt to decipher their plans to destroy us! If we don't translate the tactical plans Lopez is saying, we're all doomed!

Vic: Also, try to do better and please win.

Sarge: That information could save our very lives!

Simmons: Why don't we sneak in to Blue Base, grab the translation device, and use it on our message?

Grif: Let me get this straight: We're going to steal a bomb from our enemies - a bomb that can be remotely detonated I might add - and then we're gonna bring it back to our base, and all huddle around it. What a great plan.

Simmons: Well sure, it sounds stupid when you say it like that.

Sarge: That's not the cabeza Donut... and that's not Lopez! 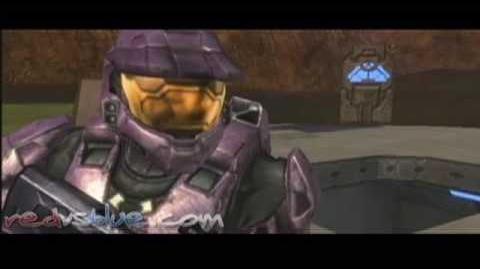 Things Are Looking Down
Original 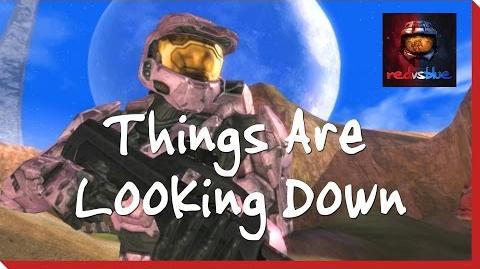 Things Are Looking Down - Episode 75 - Red vs. Blue Season 4
Remastered
Add a photo to this gallery
Retrieved from "https://rvb.fandom.com/wiki/Things_Are_Looking_Down?oldid=135661"
Community content is available under CC-BY-SA unless otherwise noted.