The Twins is the second episode of Red vs. Blue: Season 9 and the 175th episode overall.

The episode begins with the Director and Counselor discussing the system. The Counselor then activates a holographic map of the "Bjørndal Cryogenics Research Facility", displaying thermal vision soldiers and their locations. The view then fades to two soldiers patrolling, with one complaining about how cold it is (seeing that the base is located in the Arctic Ocean), while the other is forced to listen. As soldier #1 continues to complain, the other soldier (whose name is apparently Murphy) is pulled up by a wire thrown around his neck. When the soldier notices his partner is missing, he calls for him. He hears Murphy from the next room, claiming he heard something.

The soldier finds Murphy's dead body hanging from the ceiling, dripping blood, and Agent South Dakota, who was using a voice filter to imitate Murphy and lure the other guard. She then quickly disarms the soldier and throws him over the edge of a nearby cat-walk. South then contacts her brother, Agent North Dakota, who is atop a smokestack with a sniper rifle scouting the area. North tells her to stick to the objective and set her motion trackers, which South completely ignores, saying that it "takes too long". South quickly runs into a control center, despite North advising her to stay outside in order to keep a visual on her.

As she advances forward unnoticed, she continues to ignore North indefinitely until she reaches a small terminal. After pulling out a data disk and inserting it into the terminal, South starts to download unspecified data. North continues to harass her about her motion trackers until he spots two small red dots on his thermal vision approaching South's location. South draws her pistol and turns around quickly to see a soldier holding two mugs of coffee. Next to him is an emergency alarm. After a pause (and a moral conflict on the soldier's part), he attempts to reach the alarm but is shot by South.

However, his body tumbles into it and activates the alarm, causing the whole facility to be on high alert. South grabs the data disc and runs out the door while North jumps off of his perch and lands behind two soldiers, quickly knocking them unconscious. He then tells South to meet him at the facility's Heli-pad for extraction. The two meet up on a walkway while fighting toward the helipad. They kill many soldiers together and continue forward down another walkway. They succeed in every kill, but end up surrounded by dozens of soldiers. One of them, sounding incredibly agitated, says over a megaphone that they are surrounded and demands that they hand over the data file.

Counselor: Our operatives are in position Director.

Director: Good. Send them in.

The Counselor activates a holographic map.

Counselor: If I may say, sir. My testing indicates that this might not be the best team for the job.

The screen closes up on two soldiers on the holomap eventually showing them in real life.

Scully: Christ is it cold or what?

Scully: How cold do you think it is? It has to be at least below freezing, right?

Scully: Patrolling in the ice. Give me a fucking break. You know who doesn't have to patrol in the middle of the night, in the ice?

Murphy: I'm sure you'll tell me.

Scully: Jenkins. I bet Jenkins is sleeping right now. Back in his rack, with his big fucking melonhead on a soft pillow.

Scully: And then I make one fucking comment about the CO to Jenkins.

Scully: And the next thing you know I'm out on patrol.

Murphy is suddenly pulled up from his neck is by a rope.

Scully: And then Jenkins gets my next terminal duty. And I get to freeze my ass off out here with... Murphy? Come on Murphy. Hey where are ya? Murph. Stop messing around Murph. Murph.

Scully pulls out his pistol and looks for Murphy

Voice: Yeah, in here. Thought I heard something.

Scully chuckles to himself and walks in the room. He looks down and sees a pool of blood. He looks up and sees Murphy hanging from above, dead.

South Dakota: (Using a voice modulator to sound like Murphy) Yeah, I guess you could say something like that.

South hits Scully in the neck and knocks him over the platform, causing him to fall to his death.

Zoom to North Dakota camping on top of a smokestack.

North Dakota: Yes South you're clear but watch your corners. This smoke is good for cover but it's playing hell with my thermals. And the cold isn't helping.

South: Huh, I'll be gone before that.

North: Ok, slow it down South. Set your motion trackers.

South hops down onto a soldier's back and kills him; taking his weapon in the process.

North: So does getting caught. Set your trackers.

North: (over radio) South! I do not have visual in there. I can't be your eyes if I can't see.

South: Just trust me North, I got this.

South stealthly sneaks past the guards.

North: (over radio) South, talk to me.

South slides a data key into a machine.

North: (over radio) While it's loading set your goddamn tracker. There's bound to be some... South I've got something odd on thermal. Two small dots.

South: Come on, come on.

North: (over radio) South! Check your six! I think something's in there.

South turns around and points her pistol at a soldier carrying two cups of coffee. The soldier notices an alarm lever next to him.

South: Don't even think about it.

After swerving his head at South and the alarm, the soldier runs to the alarm. South quickly shoots him, causing the soldier's body to fall towards the alarm.

South: Aww shit. It's about to get loud.

The body hits the alarm and it begins to blare.

North: On my way!

North jumps off the smokestack and smashes two soldier's heads together

North: Well, so much for keeping quiet. South! meet me at the helipad for extraction.

South runs past three guards & quickly executes them. She jumps off a platform & is soon cornered by three more soldiers. She fires at them & runs forward, kicking two backward and shooting one in the head. She punches one of the remaining soldiers and breaks his leg. She tosses him towards the other remaining soldier and kicks the soldier in face, smashing in a locker. South, then again, becomes surrounded, until North appears, firing sniper. North fires his SMG right into a soldier's stomach.

North cocks the shotgun, then tossses it to South.

South catches the shotgun and decapitates a soldier with it.

North & South take cover as a sniper starts shooting at them.

South: Sniper! Top of that building!

North: Switch on my mark. Sync?

The two switch positions as South grabs a soldier's body.

South runs to the building where the sniper is, using the body as a shield.

North and South shoot down the sniper along with many other soldiers.

North: Get the door, I'll hold them off.

The two pass through the door and run to the landing pad, executing every soldier in their way.

They reach the landing pad, and then notice the soldiers surrounding them.

Base announcer: Attention assholes, stand down you're surrounded. Give us the data file now!

(left to right) Soldier #1 and Murphy

Soldier #1 plummets to his death by the hand of South

South at the Terminal

Coffee Soldier meets his end, but not in vein

South kicks a Soldiers head into a locker

South uses a Soldier as a human shield

South evades Snipers on a nearby roof

North and South fight many Soldiers

The soldiers all take aim.
Add a photo to this gallery 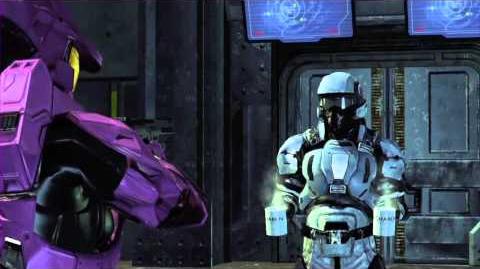 Retrieved from "https://rvb.fandom.com/wiki/The_Twins?oldid=141565"
Community content is available under CC-BY-SA unless otherwise noted.