As Agent Ohio is looking out the window, trying to boost her confidence, Agent Iowa and Agent Idaho come up behind her, playing "5 Things" (a game the Triplets invented when they name 5 things to do in a given situation, which they play often). As they discuss their lowered rankings, Agents South Dakota, Georgia, C.T., and Washington walk in. South and Georgia taunt the Triplets before leaving. C.T. tells them not to worry and says that she and Wash will still be their friends. Tired of not being good enough as the rest of the Freelancers, Ohio decides to "show them cool". As Wash and C.T. start to train, the Triplets do their own training, but fail (Idaho not being able to shoot his target, Iowa crashes a Mongoose). On Assignment Day, Ohio is depressed about how she and her teammates haven't succeded in their training. Before they can say anything else, the doors close on all sides, leaving the Triplets alone. The Counselor then beigns to tell the Triplets that the Director and he have a mission for the Triplets, confusing Ohio. The Counselor acknowledges their past failures, but says that they have proven themselves a great team. The screen then cuts to black, where the Triplets are speaking with 479er about their mission. They are then dropped out of the Pelican , with the Triplets screaming.

Vic: Project Freelancer, a military splinter organization designed with one goal and one goal only: create the greatest soldiers the galaxy has ever seen. But, if you really wanna find who's the best, well that means you gotta sort through the worst...

Ohio: Ah! Jesus Christ Iowa! You don't have to yell!

Iowa: SOMETIMES I FORGET– oh, uh, sometimes I forget how to talk with these helmets on.

Ohio: You just talk, you don't have to do anything different.

Idaho: Come on, lay off, Ohio. You know he hasn't been the same since the training incident.

Iowa: It wasn't a big deal.

Iowa: But I got the best record for holding my breath.

Idaho: That's not a thing.

Idaho: Fine, I'll give it to you. Three.

Iowa: I'm just saying it's not something I would wanna make a saving throw against, because if Super Saiyan Goku comes up, that means I'm not playing with you anymore and that would make me sad.

Ohio: Oh, will you guys just knock it off with "five things" for once?! See this, this, this is exactly why we never get mission assignments.

Idaho: Who crapped in your Cheerios this morning? You usually love that game.

Iowa: Which is all the time.

Ohio: Because we never get mission assignments!

Iowa: You don't have to yell when you're wearing the helmet, Ohio.

Ohio: You know what? Bite me, corndog.

Idaho: Oh, I get it. This is because of the new rankings, isn't it?

Ohio: (strained noise) Probably... I don't know... yes... (sighs) I mean, I just thought... I just thought, you know, maybe this would be the time we wouldn't be dead last. You know, the time where we actually get to do something. I need an objective guys, a purpose! You know anything is better than sitting around this ship hoping we'll get noticed.

Idaho: We do things, we get noticed!

Iowa: Yeah, everyone was talking about me last week.

Montage of Mongooses being destroyed. The last six are destroyed all at once when Iowa sneezes next to them.

Camera focuses on C.T. and Wash.

Idaho: Can you believe Wash and C.T. got called up to the top group?

Iowa: Do you think they'll still eat lunch with us?

Georgia: Well, well, well, if it isn't the triplets.

Georgia: Yo what'd you say, Spudnik?

Ohio: Oh, ah, he was just saying that you guys are so great, Georgia.

Ohio: Oh yeah, I mean you are like total role models for us and maybe if we work hard then maybe we'll get called up like David and Connie one da– I mean uh, Wash and C.T. (nervous chuckle) Yeah, yeah... (clears throat)

South: Sure. Good luck with that, kid.

Iowa: Oh! Five meats that you think wouldn't be delicious, but are totally delicious. Go!

South: What the hell are you guys doing?

Ohio: No guys, shut up! You are embarrassing yourselves!

Idaho: No we're not.

Iowa: Yeah Ohio, we're totally cool– SPIDER! (shoots at the floor screaming) I got him.

Georgia: Yeah, some of us have actual missions to train for.

He and South walk away.

South: Have fun cleaning our gear when we're done, triplets.

Georgia: Christ, they were weird.

They round the corner and disappear from sight.

Iowa: Hey, how come those guys are always calling us the Triplets? We aren't related or anything.

C.T.: They can be kind of mean. They're just under a lot of... pressure. Try not to take it personally.

Idaho: You got it, boss.

Iowa: See ya at lunch?

Ohio: Guys, stop! Can't you be serious for once in your life? I mean you saw how they treated us. Even our friends.

Ohio: Hmph. Cool... Come on. (walks away) They're not the only one with training ops. They want cool? We'll show them cool.

Cut to Wash and C.T.

Cut to South and Georgia elsewhere.

Alarm bell rings. The two Freelancer pairs move into action against each other, firing weapons. South and Georgia advance toward one end of a room, where Wash and C.T. are taking cover.

Cut to Ohio firing her weapon at Iowa, who yells incoherently while retreating, eventually falling down a staircase.

Iowa: Where was this thingy?

Wash fires at three traffic cones, knocking them over.

Ohio: This is so not cool.

Idaho: Could you not stand so close to me?!

Wash and C.T. exchange gunfire from cover at one end of a hallway.

Iowa drives a Mongoose into a wall and it explodes in flames.

Ohio: Contemplating the futility of existence in a coffee shop?

Idaho: Seems like your heart's not really in this, O...

Time lapse. Ohio, Idaho, and Iowa walk down a hallway.

Ohio: Yay... it's assignment day. Iowa, for fuck's sake, why did you have to crash that Mongoose?

Iowa: I technically didn't have to, it was more like, why did the Mongoose wanna crash me into the wall.

Idaho: That's not how driving works!

Ohio: Oh, we are never gonna get noticed around here...

They enter a room and the doors shut behind them.

Counselor: Agents Ohio, Idaho, and Iowa. I'm... so glad we were able to find a time to talk to you in private. While the rest of the Freelancers are receiving their weekly duties, the Director has a... special assignment for you.

Idaho: (to Ohio) You were saying?

Ohio: For us? Really?

Counselor: We have received... intelligence about... suspicious activity on a strategic outpost, that warrants... further investigation. The Director believes your... particular skill sets are more suited to the mission.

Iowa: We have skill sets!

Counselor: Yes, you most assuredly do.

Idaho: But we're not really good at, um... anything.

Counselor: As you may have noticed, you consistently rank towards the bottom of our regular assessment of the abilities of members of Project Freelancer.

Counselor: But as you also know, most operations happen in teams of three or four. In this regard, you have shown... remarkable cohesion. In fact, in assessing your abilities to work as a group, you rank at the top of that metric.

Counselor: We are... confident in your abilities. Now, please prepare your equipment. The dropship departs at 0900.

Ohio: This is our big break! If we do this mission right, people will have to take us seriously! All we have to do is work as a team!

Idaho: Bu-but teams still have to do, you know, have people do individual things. Things that we're... not good at. As far as I can tell, we're just really good at being equally sucky.

Ohio: Do not shit on my parade, Idaho.

Silence from the other two.

Iowa: When do we call you to bring us back?

Iowa: We were really high up!

Ohio: I hate you guyyyys! 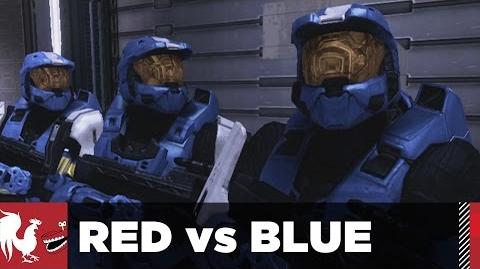 Retrieved from "https://rvb.fandom.com/wiki/The_Triplets?oldid=140603"
Community content is available under CC-BY-SA unless otherwise noted.