The Storm is the nineteenth and final episode of the third season and the fifty-seventh of The Blood Gulch Chronicles.

O'Malley berates Lopez for creating such a slow-moving robot army. In revenge, Lopez tricks O'Malley into insulting himself in Spanish. The Reds flee the battle in the Warthog to go track down the distress signal. Donut is left behind to discourage pursuit, but manages to steal O'Malley's hovercraft and rejoin his teammates. Tex steals Tucker's sword so she can fight the robots; Church decides that she must be The Great Destroyer from the prophecy. An unseen figure wipes out O'Malley's army with a volley of plasma grenades, and then attacks a startled O'Malley. Lopez's fate is left unrevealed.

Shortly after Donut catches up with the other Reds in a cave, Simmons and Grif track the signal out of the cave, finding themselves back in Blood Gulch (Coagulation in Halo 2). This discovery is accompanied by a lengthy scream of "Noooooooooo!" from Grif. Back at the fortress again, Church and Tucker admire the slaughtered robots and congratulate Tex, but she admits she's not responsible; she was in the basement, trying to get the sword to work. Church rushes over to Gary to question him about the identity of the Great Destroyer, unaware that an Alien is sneaking up on him.

Fade into the fan in front of the base, which the Robot Army (eventually) walks past

O'Malley: Hu hu hoh, for God's sake. Will you hurry up! Lopez, I'm disappointed in your work. These minions are much too slow.

Lopez: Yo creo que se están moviendo muy bien. [I think they are moving along nicely.]

O'Malley: You fool! You don't even have legs, and you still got up here faster than them!

Doc: They may be slow, but their posture is excellent!

Doc: A for effort, Lopez!

Sarge: I think they're distracted. Let's use this chance to slip away.

Simmons: Great idea, sir. I have a lock on the distress signal. We can head right for it.

Sarge: Good thinking, Simmons. Everybody in the jeep.

Sarge: There's just no room for four people. Someone will have to jog alongside. Grif?

Simmons: It's like running slowly. Dear God, you don't know what jogging means?

Grif: Yeah, you lost me at running. Sorry, it's not in my contract.

Donut: Oh, don't worry, I'll do it. Just give me one second while I put my jogging shorts on.

Donut: Who wants to hold my ankles while I stretch out my hammies?

Cut to Tex peering out a window at the Robot Army

Tex: Alright, I think I can take 'em. I just need a better weapon.

Tucker: Want me to help you find one?

Tex: Mm, why don't you just give me your sword?

Tucker: No way, I can see right through your little ploy. You just want me to give you the sword.

Tex: That's what I just said.

Tucker: Yeah, but it's the way you said it.

Tex: You know, it's a good thing that that sword doesn't run on brainpower. Oh my God, Tucker, look! Hot chicks.

Tucker: Nice try, you just want me to turn around so you can knock me out and take the sword.

Tex: Now the hot girls are makin' out.

Tucker: Okay, that's worth the risk. (turns around) Eauhw, crap.

Tex hits Tucker from behind and knocks him out, just like she planned

Cut to Caboose talking with Andy... the bomb

Caboose: Just stay calm Andy... everything will be fine.

Andy: I'm okay, really. I like explosions. You, on the other hand, look a little nervous.

Caboose: You know, I always get a little nervous during battles. ...I think it's 'cause we never win.

Andy: Eh, don't sweat it. If they get in the base, I'll just explode and kill everybody.

Caboose: Wouldn't that kill us too... Andy?

Andy: Hey. You can't make an omelet without blowin' up a few eggs.

Cut to Church talking to Gary

Church: Gary, is it possible that the Great Destroyer could be an entire army of people?

Gary: No, the great destroyer is a single person who will come to claim the great weapon.

Gary: Prepare, one and all. the fulfillment of the great prophecy is at hand.

Church: So you have no good news for me today.

Grif: One of them's following us.

Sarge: We're going too slow. We have to leave someone behind.

Donut: What? No way! You're leaving me behind?

Sarge: Sorry Donut, but military law is very clear in regard to the "not it" methodology for making decisions.

Donut: Aw man, there's still so much about the army I don't understand.

Sarge: Donut, you hide here and wait for the guy tailing us. Then when he passes, shoot him square in the back and watch him die. Just like John Wayne would have done.

Donut: All this retreating, and shooting people in the back, doesn't sound very noble.

Simmons: Just follow the distress signal to its source, you'll find us there.

Donut: But I don't have a way to track it!

The jeep drives off, thoughtfully carrying Sarge, Grif, and Simmons with it

Cut to the robot army shooting one at a time at ...something

Caption: Hey everyone! I am a purple jerk and I love to drink motor oil.

O'Malley: That was rather looong to mean hurry up.

Donut: (arriving behind a rock) Oh man, it's that creepy dude! I wonder why he's insulting himself. Qué curioso. [How strange.]

O'Malley: Are you sure cola means evil?

O'Malley: Ueuh, drat! I only had two payments left!

Lopez: ¿Tienes seguro en él? [Do you have insurance on it?]

O'Malley: Of course not.

O'Malley: It's a scam

O'Malley: Of course we live in a bad neighborhood. We're evildoers! We're what makes the neighborhood bad.

Church: Whoa, Tucker, are you okay?

Church: Hey good idea. And next time Caboose decides he wants to go around team killing, you can take that one.

Tucker: Maybe we should all stick to what we know best.

Tucker: Do you think she knocked me out for fun? This isn't Tuesday dude, she took it!

Church: Oh man, this is not gonna be good.

A plasma grenade lands on the middle robot

The grenade explodes, with the expected result

O'Malley: What was that!?

More plasma grenades take out the rest of the robot army. Conveniently cut to Gary

Cut to O'Malley and Lopez hiding behind rocks

O'Malley: Lopez, do you see anything?

Cut to Simmons leading the Reds through a cave

Sarge: You stole that thing all by yourself?

Donut: Yep, and then I ran over the guy that was chasing us. And a few other innocent pedestrians.

Sarge: I'm so proud of you.

Donut: Hyeah, stealing and killing are a huge rush. I wish I'd started at a much younger age. I caught the fever!

Simmons: Okay, the source of the distress signal is right outside this-crap!

Cut to Church and Tucker surveying the robot army carnage

Church: Wow. She really did a lot of damage.

Tucker: Are you surprised?

Church: No, not really, I guess not.

Tucker: I'll tell you what, it's days like today, I'm really glad she's on our side.

Tex: Who's on our side? Whoa! Who killed all the robots?

Tex: I've been downstairs, trying to figure out how to turn this sword on.

Church: Wait a second. (runs off)

Cut to Church and Gary

Church: Oh come on Gary Gary Gary, stop stop stop. Hey if Tex is not the destroyer from the prophecy, then who is?

Cut to a shot of Church, with an alien sneaking up on him 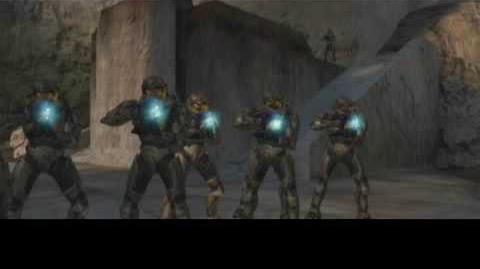 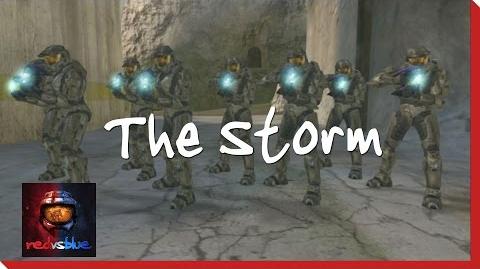 The Storm - Episode 57 - Red vs. Blue Season 3
Remastered
Add a photo to this gallery
Retrieved from "https://rvb.fandom.com/wiki/The_Storm?oldid=135645"
Community content is available under CC-BY-SA unless otherwise noted.