The beginning of a new adventure for the Reds and Blues picks up right where the last one left off... a conversation about where to get lunch. They notice that Donut is not with them and Grif tells Caboose to go search for him. Caboose goes into the base from season 15 and finds multiple Donuts. We cut to Donut being suspended in the air while Caboose is asking him about what he wants to eat. Donut screams in pain as his body is twisted in unnatural ways. He disappears and Caboose heads out to tell the crew that he left. After telling them that he left the Reds and Tucker want to find him but Grif says no. They leave to get pizza while Carolina heads off to Chorus with the Chorus gang. Unbeknownst to them unknown creatures called Muggins and Huggins have been watching them. Muggins tells Huggins to watch over the Reds and Blues and to not be spotted. He then travels to an unknown planet where he tells a man sitting on a chair that the “Pizza Quest” has begun.

In the Medieval times, the blue sky pans down to a lone stone parapet. A lute can be heard playing in the background. Two knights - one wearing orange and the other wearing maroon - stand guard atop the watchtower armed with crossbows, before having an all too familiar conversation, albeit in Old English.

Maroon Knight: Doth thee ever wonder wherefore we be hither?

Orange Knight: Ah, one of life's most wondrous mysteries. Wherefore art we hither? Art we the product of some cosmic coincidence? Or perhaps the Lord God doth watch over everything after all? I knoweth not, good sir, but it doth keep me up at night.

Maroon Knight: What? I meanst wherefore art we out here? Betwixted in this canyon? What wast all yon stuffeth about God?

Maroon Knight: Are thee sure?

Maroon Knight: Loseth not thy faith, my unfusty cousin. The Lord God doth gaze upon all of us from His high seat on the throne of Heaven. He hath a purpose for each one of us! I assure you, we art all part of His holy plan!

Unbeknownst to the two of them, a pink portal opens up behind them. The camera zooms into the portal as it zooms through a blue tunnel while a voice speaks.

Muggins: There is an unwritten rule in our universe, where the greatest changes hinge on the humblest of actions. A trick, an act of friendship, a slice of pepperoni pizza. Suddenly, all is lost. The end is nigh...

A montage showing some of the latter moments from the previous season are shown while the voice continues to speak.

Muggins: The fates told us that the beginning of our end was an ending of its own, but their prophecy came too late. Not before the Reds and Blues have vanquished their foe. Not before their foe had activated the temporal vortex. Most critically, not before the device fulfilled its true purpose. We watched in horror, my lord, unable to prevent the calamity that follows.

The Reds, Blues, Chorus Lieutenants, along with CAROLINA, DOC, DYLAN ANDREWS, and JAX JONES all stand together not too long after the ending of the previous episode.

Grif: I could eat a horse!

Carolina:  With you, I'm worried that's not a figure of speech.

Grif: That's a figure of speech?

Simmons: What the fuck is wrong with you?

Grif: Whatever, are we done here? 'Cuz I got some volleyballs to spike in this fucking volcano.

Simmons: Was that an attempt at a metaphor?

Tucker: Yo, are we serious about grub? My stomach is rumbling! With all the fighting and shooting, I think we skipped a meal or three.

Sarge: There ain't no good reason to go out for chow! We still got MRE's to spare! I've got an emergency supply stuffed in Lopez for this very situation!

Sarge: Yes ma'am, right up his keister! Waaaay deep in there, next to his radioisotope nuclear generator! They always stay nice and toasty! Mm-mm.

Simmons: You think that's gross? Just wait till you see where the condiments come out...

Grif: Look guys, we could get leukemia from eating out of Lopez's butt literally anytime, but right now, we're on Earth. Culinary capital of the civilized galaxy! Let's go out!

Tucker: Shouldn't we stick around? Deal with the cops?

Dylan: May be best to let us handle that. The UNSC still thinks you're all terrorists. I'd suggest lay low until the truth comes to light.

Sarge: How 'bout a blood sausage? Or some blood pudding? Or the blood of my ADVERSARIES! You know, just to mix things up.

Grif: There's a Chili's on Chorus now, we could do that anytime.

Caboose: Oh! How 'bout Home Depot? They have the best cotton candy.

Carolina: And now, we know where all the wall insulation went...

Doc: Maybe something with a vegetarian option?

Grif: You don't get a vote! You lost it when you betrayed us. (under his breath) Purple Judas...

Grif: Simmons, I like the way you think, but let's save that for dessert.

Simmons: No, where's Donut? Shouldn't he be down here yelling about fondue?

Simmons: How about sushi?

Sarge: No way, Jose! Red team only eats winner food! No chow from any country that ever lost a World War! No German! No Japanese! And no French Canadian!

Caboose walks out from behind a rock

Caboose: Has anyone seen my penny?

Grif: Caboose, focus! What did we tell you to do?

Sister: How about poke?

Grif: Gross, no fish! I want something that can give me a heart attack! How do you feel about turducken?

Meanwhile, Caboose walks back into the facility to look for Donut.

Multiple copies of Donut are shown running around the room screaming, some zapping in and out of existence, and some lined up turning their heads one by one. Disturbing noises can be heard from the Donuts. Caboose, of course, remains oblivious to what goes on in front of him.

Caboose: Ah, yeah, me too. Tell me, how do you feel about Greek?

All of Donut's copies zap back into the real Donut, who levitates in the air and gets his body bent in many unnatural ways, causing him to scream.

Caboose: Yeah, me neither. What about fish and chips?

Donut continues to scream in pain has his body starts to spin and have spikes protruding from him.

Caboose: ...yeah, I am always confused about that too. Why say chips when you mean freedom fries?

Donut screams out loudly one more time before his body suddenly pops out of existence.

Grif: That's it, I'm putting my foot down.

Grif: Trust me, dudes! Sammie Raphaello's is the best fucking pizza on Earth.

Sarge: I can live with pizza. Like Doc, the Italians switched sides at the last minute in all three world wars! But no calzones! We're leaving the calzone in the friendzone.

Palomo: Nah, we're good. We all ate on the way here. There's an In-N-Out in the Delta Ari system now!

Jensen: And we really need to get back home, there are some very interesting things happening on Chorus these days!

Carolina: If you guys are heading back to Chorus, I'd love to hitch a ride. I'd like to make sure Wash is on the mend. Not that you'd need my permission, but you all have earned some R&R. Enjoy your pizza, and grab a to-go slice for Washington.

Tucker: One slice? I'm bringing that dude back a deep dish and garlic knots.

Sister: I'm in! It sounds fun. And maybe we can get into some crazy shit along the way!

Grif: No adventures! We are not getting involved in any more stupid bullshit! I've invented a new science to make sure of it.

Tucker: Caboose! You were supposed to bring back Donut!

Tucker: He left the island?

Carolina: I'm confused, where did he go?

Caboose: You know, he didn't say. It was a little rude.

Sarge: And leave Donut behind?

Tucker: Maybe we should look around, just to be sure.

Sarge: Alright! Ain't no party like a search party!

Grif: No! No looking around, no more standing around talking, no more nothing! Let's just get out of here before the cops show up and stick us in space Guantanamo where the food is terrible!

Grif: You're goddamn right I'm hangry! I don't understand why everything has to be such a great big goddamn production with you people! We're going out for pizza! Not some epic quest!

Grif: (sigh) Do not call it that. It is not a pizza quest, we're going to Sammie Raphaello's for a large pepperoni, end of story.

The two ships then take off. Suddenly, two small light beings come out of hiding, having overheard the Reds and Blues conversation.

Huggins: Oh. The. Gods! Muggins, can you friggin' believe it?

Muggins: Settle, Huggins! Watch closely and do not let the mortals leave your sight.

Huggins: Oh. Yeah! Solo mission for the rookie! I can handle it, chief! Coach! Uh... capitan!!

Muggins: I will return as soon as I can. Do not let them see you.

Huggins follows the Reds and Blues, while Muggins travels out of Earth's atmosphere into the cosmos of space. As he flies through space, the season's opening credits are listed. Muggins eventually arrives at a planet located near a black hole. He enters a castle and flies by a figure in green armor golfing.

Muggins then approaches his superior, a giant sitting on a throne of sorts.

Muggins: Your grace, I bear grave tidings from the human homeworld.

Muggins: The final prophecy is unfolding. The Pizza Quest has begun!

RED VS. BLUE: THE SHISNO PARADOX 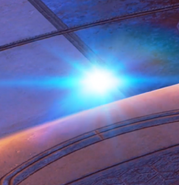 Retrieved from "https://rvb.fandom.com/wiki/The_Shisno?oldid=142804"
Community content is available under CC-BY-SA unless otherwise noted.