The Package is in the Open

The Package is in the Open is the fifth episode of the series.

As Donut, whom the Blues assume to be the Red Team's sergeant (as both wear standard-issue red armor), makes his way towards Red Base with the flag, Church fires several rounds at him with the sniper rifle, missing each shot. Church then orders Tucker to cut Donut off by using their base's teleporter; when Tucker fails to emerge on the other side, Church quickly pursues on foot while the Rookie stays behind.

Meanwhile, having heard the rifle shots, Grif eventually spots Church chasing Donut, and decides to back up his teammate with the warthog along with Simmons.

Church, Tucker, and Caboose are standing on top of Blue Base.

Church: Let me get this straight.. You gave this guy our flag?

Caboose: Is that bad?

Church: Bad? Oh no, that's not bad. Next time he comes over, why don't you just help him blow up the whole goddamn base?

Tucker: There, there he is.

Church: (looking through the sniper rifle) Where? Oh, yeah, oh, I got him. He's sneaking around back behind the cliffs.

Tucker: He must be one smart son of a bitch.

Cut to Donut looking around the canyon.

Donut: Oh, man, I am so freakin' lost. Where the hell is the base?

Cut to Church, Tucker, and Caboose.

Tucker: Oh man, that means it's their Sergeant.

Church: Well, that makes sense. At least now we know how he got by our defenses.

Caboose: Uh, you know.. he came in the back door where you guys were standing.

Tucker: Yeah, okay, well let's take him out then.

Cut to Donut as Church shoots four times but misses.

Donut: (crouching) Son of a bitch!

Tucker: You're REALLY not very good with that thing, are you?

Donut: (shouting at Blue Base while waving the flag) Hey! It's me! Don't shoot! I'm the guy that bought the flag, remember!?

Church: Alright, that's it, I've had it. Rookie, you stay here. Me and Tucker, we'll head through the teleporter, we'll cut him off at the pass.

Tucker: There is no way I'm going through that thing.

Church: Tucker, we don't have time for this. Why would they give us a teleporter if it doesn't work?

Tucker: I don't know, why would they give us a tank that no one can drive?

Tucker: We threw rocks through it!

Church: Yeah, and, so what? The rocks came out the other side, didn't they?

Tucker: Yeah, but they were all hot and covered with black stuff.

Church: Oh, so I guess that's what this is all about then. You're afraid of a little black stuff.

Tucker: Yes. I am. I am afraid of black stuff.

Church: Tucker, I almost hate to do this to you. (raising his gun at Tucker)

Church: You know, I look at it this way: Either A, we go through there and get the flag back, or B, we stay here and I get to kill you. Either way, I win.

Tucker: For the record, I want you to know, rocks aren't people.

Church: Duly noted. Now get in there.

Tucker runs through and doesn't appear on the other side.

Church runs off the base to chase Donut.

Church: Okay, rookie, you stay here! I'll be back with the flag!

Simmons: I still have no idea what you're talking about. I didn't hear any shots.

Grif: Bam. (sees Church through a sniper rifle) Wait a second, we've got a Blue guy on the move out there.

Simmons: Heh, you mean the Puma?

(Grif says this in the Earlier Version) 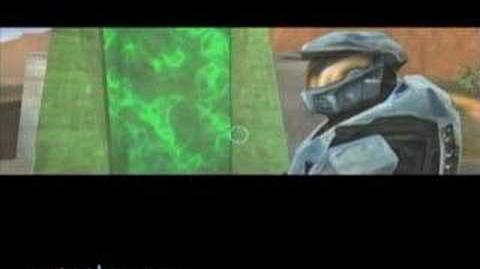 The Package is in the Open
Original 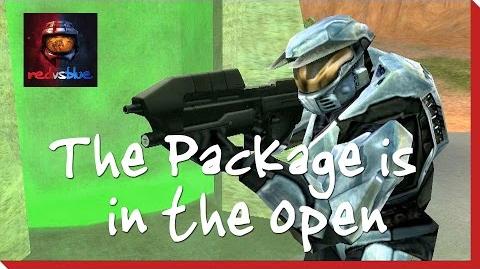 The Package is in the Open - Episode 5 - Red vs. Blue Season 1
Remastered
Community content is available under CC-BY-SA unless otherwise noted.
Advertisement