Inside the Mother of Invention, North Dakota introduces his new A.I., Theta, to York, Washington and South. Because Theta exhibits a childlike, shy personality, York introduces his AI, Delta, to help Theta feel comfortable. Suddenly, the Director arrives and prepares a test for Theta and North. He reminds Delta that protocol forbids direct interaction between A.I. programs, which York apologizes for. The Director then orders Delta to administer the test. During the test, Theta is able to successfully operate North's Domed Energy Shield armor enhancement to defend against multiple automated turrets, compensating for changes in the situation of the test. With Theta's aid, North is ultimately able to eliminate all of the turrets using his sniper rifle, greatly impressing Washington and York.

Meanwhile, at the Wind Power Facility, in present day, the Reds discuss being dragged along with the Blues on the mission, with Simmons expressing his concern for agent Carolina. After Sarge and Grif abruptly leave, Simmons is left alone with Caboose and admits that he misses the period of time when the Reds were fighting only him. Elsewhere, Tucker and Epsilon witness Washington entering a doorway in the facility.

Fade in to space where the Mother of Invention is seen flying through space. Cut to Washington and York staring downwards between North Dakota's legs.

FREELANCER TRAINING FACILITY, MANY YEARS AGO...

Washington: I expected it to be... bigger.

York: Why? You've seen mine. It's small too.

York: How does that even make sense?

York: Small, yeah! But you wouldn't believe what it can do!

North: Besides, you better get used to it. You're going to have one of your own, soon enough.

South comes to see what they're all looking at

South: (scoffs) Give me a break.

North: It's alright Theta, come on out. People just want to say hello to you.

The camera pans down to reveal Theta, a blue and red multi-colored A.I., hiding behind North's left leg

Wash: See! I'm not the only one who thinks size is important.

North: It's okay Theta. They're all friends of mine. For reasons beyond my comprehension.

Theta: They're looking at me.

North: That's because they want to meet you.This is York and Wash.

York: Give it a rest, Wash. Theta, I have a friend just like you. His name is Delta.

Theta appears in front of York.

York: It's okay, man. Just for a second.

Delta appears in front of York

Delta: Hello Theta. I am Delta. It is nice to meet you.

North: See? Everybody here is nice. Isn't that right, Delta?

Delta: Agent North, I do not feel qualified to make a judgement about humans with whom I have only limited experience. Also, "nice" is a rather subjective term for-

North: And that's my sister over there, South. We're twins.

Camera shows South leaning against a wall, watching them.

Theta: I have a sister.

Theta: We have many siblings.

Wash: What do you mean by si-

The Director and Counselor enter the room. The Freelancers line up and Theta disappears

Director: I hope you're ready to begin our test. Delta! I believe you know the protocol about communicating directly with other A.I. units.

Director: Don't! I want you to help administer the test. Gentlemen, if you will take the floor.

Theta appears in front of North

Theta: Are they all going to watch?

North: Of course! They want to see if you're as good as i said you are.

North: That's the spirit! Come on, let's do this!

They exit to the floor

Director: Delta, I expect you to follow protocol at all times.

Delta: We were only attempting to make the new unit more comfortable.

York: It's my fault, sir. I asked him to. New kid seems kind of shy.

Counselor: Agent North was paired with Theta for a reason. His nurturing nature is best suited to care for Theta's....unique personality.

York: Yeah. He is used to looking out for people, isn't he?

Counselor: Quite. Delta, your skills are more... analytical in nature.

Delta: If I may disagree, Theta has made double the number of declarative statements since my appearance. That indicates 100% increase in confidence since we modified our interaction strategy. I think that speaks volumes to my caring algorithms.

Delta disappears. Camera pans down to the training floor while the Freelancers watch from an above window. North enters the floor with a sniper rifle in hand.

Counselor: As you may recall, Agent North used his equipment in the field on a previous mission.

Delta: He was able to successfully maintain the deflective shield for 3.4 seconds in order to block an explosive projectile attack.

Director: And he somehow managed not to kill himself in the process.

Delta: The maneuver only had a .1% chance of success. Had he performed it 999 more times, I'm rather certain he would've been obliterated on each one.

York: Hey, I'd rather be lucky than good any day.

Wash: You usually are.

Director: Luck will only take one so far. I am in the business of getting results. Let's see what Theta can do. Delta, reduce shield strength by 50%.

Theta takes control of the Domed Shield and separates it into tiles, blocking the turrets' incoming fire.

The turret beams begin to gyrate, moving around and above North and Theta. Theta follows the turrets and maintains critical shield tiles where they are needed.

Theta: Stop talking to me! You'll mess me up!

The floor resets and the Domed Energy Shield becomes fully restored to 100% power.

Director: Agent North. Your objective now is to eliminate all targets.

Wash: I thought the shield works both ways. There's no way for him to attack.

North: Firing. On my mark.

North fires his sniper and the bullet is seen moving in slow motion. The shield flickers open just enough for North's sniper bullet to pass through and then immediately reseals. The bullet takes out a turret. North and Theta repeat this method for the remaining turrets.

York: HAHA YEAH! What did I tell ya?

Wash: And we're sure they don't get any bigger?

York: Dude, you are killing me with that!

Cuts to the Reds at Zanzibar.

Grif: Sarge, how come every time the Blues get involved in something stupid and dangerous, we get dragged along too?

Sarge: You know what they say. Keep your friends close and your enemies within range of your primary firearm!

Sarge: So you can shoot em!

Simmons: ... I realize that we agreed to help Wash and Carolina, but how do we know that they're gonna help us?

Grif: What do you mean?

Simmons: I mean, if we run into trouble, do you really think they'll stick their neck out for us?

Grif: What a ringing endorsement!

Simmons: I'm more worried about Carolina. What if after all of this is over, she decides to get rid of us?

Grif: Why would she do that?

Simmons: I don't know! To tie up loose ends? To cover her trail? Don't you watch spy movies? They love that shit!

Sarge: My God, man! Get a hold of yourself! You're making us look weak in front of the enemy!

Sarge: Listen! I don't want to hear you talk about secret double-crosses, or mysterious subplots, or Freelancer conspiracies anymore! We've had enough of those going on around here as it is.

Simmons: But don't you think that-

Grif: Sorry, sorry! I can't really talk right now, Simmons. I have got to go secure a perimeter over at the, uh, shady spot over there.

Simmons: I liked it better when we only had to fight you.

Caboose turns to see that Tucker is gone.

Cut to Tucker watching the entrance of the facility. Epsilon appears next to him as they watch Wash enter the facility. 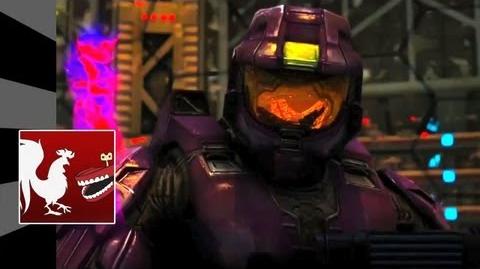 Retrieved from "https://rvb.fandom.com/wiki/The_New_Kid?oldid=136016"
Community content is available under CC-BY-SA unless otherwise noted.