The Joy of Toggling is the fourth episode of the second season and the twenty-third of The Blood Gulch Chronicles.

At Red Base, Grif and Doc discuss Sarge's previous head injury. After Grif tells Doc that he had given Sarge CPR for the bullet wound to the head, Doc accedes that as an acceptable treatment. Grif is delighted to have someone finally agree with him after being scolded for the procedure's apparent illogicality. Doc further describes it as "alternate methods of care".

He then gives an example with his treatment to Caboose's foot, stating that he only rubbed aloe vera on his neck, which calmed Caboose down. Sarge then tells Grif to stop conversing with Doc, as he is Red Team's prisoner. Grif complains, stating that Doc was unarmed to begin with. Simmons sarcastically remarks that both of them would get along well, stating that Grif had previously forgotten to bring ammunition when they attacked Blue Team and that Doc is without a weapon. Grif immediately retorts, calling Simmons a "kiss-ass" while also reminding him of their last prisoner escape due to Simmons fault. Doc then informs everyone that he is not directly associated with Grif as a "friend", and that they were just talking. Grif stares at Doc without saying a word, leaving Doc uncomfortable.

Meanwhile, at Blue Base, Tucker asks Church if he can somehow activate his (Lopez's) body's "repair sequence" in order to fix the tank and Sheila. Church thinks it is a good idea and tries to trigger the sequence. He outwardly grunts in the process as he attempts to do so, but is unsuccessful, explaining that it is more difficult that it seems. Tucker then suggests that there might be a button located somewhere on him to activate. Church tells him to find it, as he continues to find a way internally. Church then proclaims that he had found the activation sequence, but is mistaken when he sees the time and temperature instead. Tucker continues to search, then finds a peculiar switch located on Church's crotch area. Tucker tells Church of the switch, to which Church tells him to "give it a flip". Tucker hesitates to do so, saying that it is in a weird place. Tucker suggests for him to flip it, then for Caboose to flip it instead. Church declines, stating that he cannot due to the low-flexibility of his arms, and that Caboose might be too stupid to operate a switch. Tucker reluctantly tries to flip the switch, but cannot.

He then tries to wiggle it, but Church makes a joke about, prompting Tucker to stop. Church apologizes, and Tucker resumes his attempts. He finally flips the switch, asking Church if anything had happened. A loud beeping noise is heard. Church tells him that nothing has happened and asks Tucker if he hears something beeping.

Back at Red Base, Sarge asks for ideas on what they should do with Doc. The same beeping noise is then heard, becoming more audible as the Reds speak. Simmons suggests to have Doc separated from Grif as it is "cruel and unusual to have to talk to him (Grif)." Donut also suggests to have Doc switch armor with one of them, preferably himself, as punishment. The warthog comes online without notice, announcing that's its homing beacon has been activated. Donut asks of he had heard the jeep "talk" with Sarge expressing concern.

Camera pans down to Doc and Grif talking outside Red Base.

Doc: ...and you gave him CPR for a bullet wound in the head.

Grif: That's what I said.

Doc: Oh yeah, people often overlook alternative methods of care. Like that Blue guy that was shot in the foot during the battle? All I did was rub his neck with some aloe vera, he was fine.

Grif: Yeah, I don't know about all that. I'm just glad that Sarge is wrong.

Sarge: Grif! Yer supposed to be watching the prisoner, not playing lookie-loo with him all day long!

Grif: Come on Sarge, he doesn't even have a gun.

Simmons: Oh, well you two will be great friends then. He doesn't have a gun, and you didn't bring any ammo!

Grif: Hey thanks, kiss-ass. If I wanna take guarding tips from the guy that lost our last prisoner, I'll be sure to ask you.

Donut: Oh man, that is a burn. Dude, you just got burned. Burned, dude, burned.

Doc: Uh, hey, guys? I-I just want everybody to know that Grif and I aren't, uh, technically friends.. uh, we're just talking. That's it. (to Grif) Sorry, man, but it's pretty obvious that you're really unpopular, and if I'm gonna make any progress around here at all I can't really be directly associated with you. I'm sure you understand.

Doc: It's only because no one likes you.

Doc: Stop staring at me.

Camera zooms through the gulch, revealing Sheila still in the middle of it, then ends on Church and Tucker behind Blue Base.

Church: Yeah, it's not as easy as you'd think it would be.

Tucker: Maybe there's a button on you somewhere...

Church: Nah, no wait. All I found was the time and temperature function. It is currently twenty-six degrees, by the way.

Tucker:What? It's not twenty-six degrees out here, that's freezing. (as Tucker talks, Caboose passes through the entrance of the base)

Tucker: Oh come on, dude, Celsius sucks. (kneels down and looks at Church) Hey, I found something.

Church: Well, give it a flip.

Tucker: I don't wanna flip it.

Tucker: It's in a weird place.

Tucker: You flip it.

Church: These arms aren't that flexible, I can't even reach down there.

Tucker: What about Caboose?

Church: Oh man, he's so stupid, I don't even know if he knows how to operate a switch.

Church: C'm-Tucker, come on. We'll laugh about it later. I'll buy you dinner.

Tucker: (kneels down and tries to flip the switch) It won't move, it's stuck.

Church: Did you try wiggling it?

Tucker: No way, I'm not wiggling your dongle.

Church: Oh, stop being a baby. Just wiggle it.

Tucker kneels back down.

Tucker: Okay look, if you want me to do this, you can't talk like that.

Tucker: I wish Tex was here, she wouldn't have any problem flipping it.

Church: You obviously did not know Tex that well.

Tucker kneels back down and flips the switch and a beeping noise starts.

Sarge: Are there any ideas on what to do with the prisoner?

The same beeping starts fading in, approaching the same volume.

Simmons: Well, we have to get him away from Grif, because ...yeah, you know, it's kinda cruel and unusual to have to talk to him.

Donut: How 'bout we, um, let him trade armor with uh, one of us? That would show him.

The Warthog's headlights flash in time with the beeping

Warthog: (voice is warbled and slurred) Warthog online. (the headlights flash once and remain on, and the voice is now up to speed) Homing beacon activated. 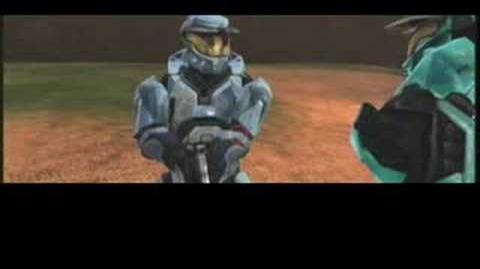 The Joy of Toggling
Original 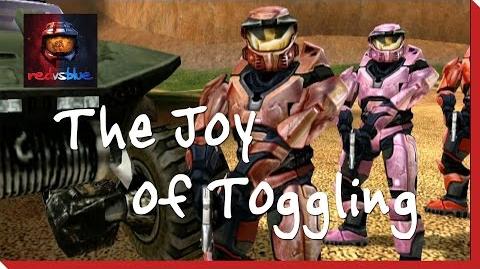 The Joy of Toggling - Episode 23 - Red vs. Blue Season 2
Remastered
Add a photo to this gallery
Retrieved from "https://rvb.fandom.com/wiki/The_Joy_of_Toggling?oldid=128783"
Community content is available under CC-BY-SA unless otherwise noted.