The Hard Stop is the sixth episode of the fourth season and the sixty-third of The Blood Gulch Chronicles.

The episode opens up again at the Zanzibar fortress, as Tucker and Caboose are attempting to teach the Alien English. Church and Tucker get into a small debate on whether they should teach the alien English or learn his language. Tucker is convinced that they should teach English to the Alien and even had created some visual aids. As it turns out, Tucker was able to get the writing supplies from Caboose's gun which apparently contained crayons instead of bullets. However, when Tucker activates his energy sword to cut the poster boards, the Alien jumps over and attacks him. Despite Tucker's cries for help, Church watches the Alien as it attacks Tucker in order to "evaluate" his fighting style.

Back at Blood Gulch, Simmons is at Blue Base with Sheila close by. He attempts to contact Red Base, but is greeted with Donut on the line, who tries to impersonate an answering machine. Simmons attempts to get Sarge on the line, but Donut, under instructions from an off-screen Sarge, denies Simmons from communicating with Sarge, even after he informed Donut that he had captured the Blue Base and Sheila. Eventually, Donut hangs up on Simmons, but not before letting Simmons know that he really enjoys his new job as Sarge's right-hand man. Simmons then declares that he will kill all the Reds and tells Sheila to "lock and load."

Back at Zanzibar, Tex talks with Andy. Tex, through some bluffing and mild threats of blowing up Andy with a remote detonator, convinces him to help her translate what the alien is saying. This, however, doesn't stop Andy from making rude jokes about Tex acting more male than female.

Fade in to the building the Blues are in

Church: I'm right behind you dumbass.

Tucker: Oh. Hey Church, do you have a knife?

Tucker: She said she had something to take care of. Girl stuff I think.

Tucker: We're gonna teach the Alien how to speak English.

Church: How're you gonna do that?

Tucker: People learn English all the time, it aren't that hard.

Church: Maybe you should try learning his language.

Tucker: Fuck that, we got here first, and that makes this a colony. Those're the rules, dude. Earth colony, Earth language.

Tucker: Hyeah, but only one that kicks ass. And that's the one we're teaching. English 101, remedial kick-ass.

Church: Alright, there is no way this is gonna work.

Tucker: Yeah it is, we got visual aids and everything.

Church: Where the hell'd you get those?

Tucker: We made 'em. Turns out Caboose's gun didn't have any bullets- it was loaded with crayons. I just need to cut one of these things, you have a pocket knife?

Church: Hey if you need to cut something, why don't you just use that big sword o' yours?

The Alien jumps Tucker and starts beating him

Tucker: Ahh, what the fuck!?

Tucker: Aaaaaaaah, get this fucking thing off me!

Church: Heh wait a second Tucker, this might be a good chance for us to evaluate how these things fight.

Cut to Blue Base back in the Gulch, to the sound of the radio tuning in to something

Simmons: Sarge, can you hear me, Sarge, come in. Sarge, Sarge do you read me, this is Simmons, come in.

Donut: Hello, Red Army HQ. We don't stop until every blue is dead.

Donut: For help in English, press or say 1.

Simmons: One. Wuuunnnnah. Wu- God dammit. (presses one on the keypad)

Donut: For unconfirmed Dutch-Irish, press one too, as in also.

Donut: Oooh, yeah, Sarge is reeeally busy. Things have really picked up since you left, uhh...

Donut: Sorry Simmons, Sarge isn't available at the moment. I'll tell you what I can ask him to call you back but, it's really better if you have an appointment.

Simmons: Oh for the love of God I can hear him, Donut. Would you just tell him that I've captured the Blue Base and- ...and taken possession of their tank.

Sarge: You're going through a tunnel!

Simmons: Are you really writing this down?

Donut: Look I have to go, we have a conference call with Grif in five minutes. He's pitching ideas for how to use your rations. Gotta run! If anything comes up, we'll call you. And Simmons?

Donut: This job is the best! I can't believe you quit! (turns off the radio)

Cut back to the Blues' building, with the Alien still beating Tucker in the back of the head on the ground

Tex: Excuse me, is that any way to talk to a lady?

Andy: A lady, who're you kiddin'? I bet you got more balls than a roman candle.

Tex: Uhhh, I knew this was a bad idea.

Andy: Hey Tex, why you got black armor, couldn't find any in flannel?

Tex: I put you together, I can take you apart.

Tex: Bombs, come with remote detonators dumbass. And any time I want, I can just hit a button and you're just a memory. A very annoying, very insulting memory, but none-the-less, a memory.

Tex: Well, when I built you, I used parts from an old protocol robot.

Andy: Yeah, sure, and you also used parts from some of your more personal devices.

Tex: Whoa- okay, can you use those protocol parts and translate what this alien thing is saying?

Andy: Of course! But what's in it for me?

Tex: Let's put it this way. You don't push my buttons, and I don't push yours.

Andy: Alright, fine. But I'm not translating any of that touchy-feely crap!

Tex: Deal. Come on. (starts walking, then turns around) Well are you coming?

Andy: What'm I gonna do, roll there? Pick me up ya dumb bitch!

Tex: Great, I can tell this is starting off well.

Andy: Hey, Tex. I bet you haven't had your hands on a ball this big since your morning scratch! Ahahahahaheh, ahehahe-

Andy: Heyy, aw come on, Tex, baby, where ya goin', it's just a joke between the two of us guys, come on! Laugh it off big guy, laugh it off! Haha, hey Tex, when you walk away I can see where ya tucked it! Haha! 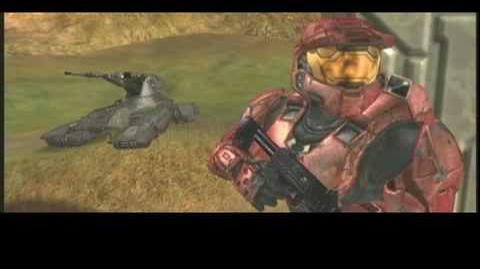 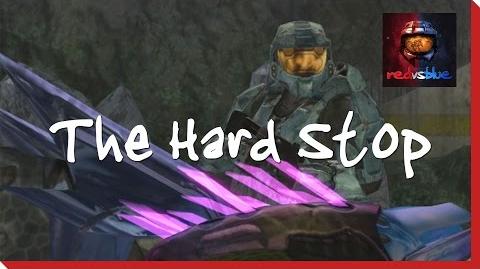 The Hard Stop - Episode 63 - Red vs. Blue Season 4
Remastered
Add a photo to this gallery
Retrieved from "https://rvb.fandom.com/wiki/The_Hard_Stop?oldid=135649"
Community content is available under CC-BY-SA unless otherwise noted.