The Best Laid Plans is the first episode of the third season, and the thirty-ninth of The Blood Gulch Chronicles.

Donut tries to coax an injured Tucker into getting up, conveniently providing a recap of the end of the previous season in the process. Sarge and Caboose find themselves in Battle Creek, in the midst of perpetually respawning Red and Blue soldiers ("Grunts"), who engage in a complex action sequence that lampoons multiplayer game sessions in Halo. (It is notable that Sarge and Caboose were the only two who could be shown on this map, because the other, non-standard armor colors cannot be displayed in capture-the-flag mode). Meanwhile, Simmons is lost in the Teleporter Nexus, and Grif and Church have been imprisoned by the Red Team on Sidewinder.

Fades in on Tucker lying face down in the ground, with Donut standing over him

Donut: Come on mister blue guy, you gotta wake up. Wake up.

Donut: You can't die, I'm bored! All these girls wanna talk about is chick stuff, and not the fun chick stuff like ribbons and unicorns.

Cut to Tex and Sheila

Tex: I don't have treads, but I often find them staring at things they really shouldn't be.

Cut back to Donut and Tucker

Donut: You see? Boring stuff like oppression, and a hostile work environment.

Tucker: Get Doc, I need Doc.

Donut: I can't. He got possessed by that evil guy and they escaped. He's the one that shot you. Don't you remember?

Tucker: I know. I want him to shoot me again.

Donut: Now now now, sounds like someone's got a case of the "poor me"s. If you were gonna die you would have done it by now! Maybe you just need to realize, you're gonna have to live with intense pain.

Tucker: Get that Sarge guy, have him make me a new body.

Donut: Huhg, we can't. We're out of parts because we overused that joke. And Sarge left with the others to chase Doc. But don't you worry, they left a long time ago, so I'm sure they'll be back any minute. Simmons had a fool-proof plan to catch him.

Simmons: Hellooooo... Hello? Is anybody here? Just great. I guess we all got separated in the teleporter.

Simmons: Sarge. This is Simmons 2.0, do you read me. Apparently your plan to chase Lopez and Doc has failed miserably. I appear to be stuck in some kind of nexus of teleporters, which could take me anywhere in the Universe... Or it's a janitor's closet, the hell I don't fucking know, Sarge, are you there, Sarge!

Cut to Sarge and Caboose standing in a stream

Sarge: Hello, anyone! Do you read me? Do I read you? Anyone? Anybody? Nobody? Okay. (sound of his radio turning off. To Caboose) Well, I don't think the others are coming. They must have gotten separated somehow.

Caboose: My toes, are getting pruny.

Caboose: I know where you can find O'Malley. He lived inside my helmet for a while, maybe he left an address to send his mail. We were like roommates. (runs off to follow Sarge)

Sarge: Sounds like he took some of the furniture when he left. And the carpet. And the drapes. And I wouldn't expect to get that deposit back. If you know what I mean.

Sarge runs over and kneels by the fallen blue

Caboose: Oh good. At first, I thought that was me. Because, I am blue. And, I like to sleep. But, if he is dead that cannot be me. That would be silly.

Sarge: No doubt he was killed by our very enemy, once again I find myself torn. On the one hand, there's one less blue in the Universe. But now Doc's got a bigger body count than me! And that just won't do. No sir. Rest in peace... scumbag.

Caboose: Look - more sleeping people! It must be nap time. But who has nap time now? Nap time comes before pants time, not after. I think these people are just making up times.

Sarge: What the Samuel Helsinki happened here? There must have been an enormous battle. Hello! Is anyone okay!? Are there any survivors? Preferably any red survivors? Don't let that discourage you from speaking up if you're blue, I won't step on your neck or anything like that.

Caboose: Am I allowed to answer?

Sarge: Shh quiet. You hear that?

In the background, trumpet music starts getting louder

Caboose: Yes. That noise is called water. It is very wet, and very sloshy-

Sarge: I was talking about the trumpet, bluetard.

Caboose: I have to go to the bathroom now for some reason. Which is odd, because I already went when we were standing in the creek together.

Sarge: Wait a minute I know that song, that's Reveille. But why would someone be playing Reveille in the middle of a-

All of a sudden, every fallen soldier at once jumps up yelling and cheering

The soldiers all run off, going around Sarge and Caboose to get back to their bases

A blue soldier: (jumping in to the blue base) and jump.

A red soldier: (running to the red base) Huay ho huay ho ho hey ho ha ya ho ya yo yuh!

The soldiers all run in to their bases, leaving Sarge and Caboose alone outside

Caboose: I think all the sleepy people were trying to ke-

Sarge: That was rhetorical.

A blue soldier: (from inside) Yeah, go blue team!

Blue soldiers: (from inside, continuing to yell... see the bottom of the transcript for what they say)

Sarge: Get over here, give me a boost!

Caboose: Okay. (steps closer to Sarge) You are a good person, and people say nice things about you.

Sarge: Not a morale boost, moron, a physical one. I need to see what's in that window.

Caboose: That window is very high. I don't think you are tall enough.

Sarge: I know, I need you to help me look through it.

Caboose: I don't think I am tall enough either. Also, my head is round, that window is square.

Sarge boosts Caboose up to look in the base

Blue soldier 1: I'm gonna kill me a red, and when I get him I'm gonna chop his gutsout I'm going to eat 'em right there. (they continue yammering, see the bottom of the transcript)

Sarge: What do you see?

Sarge: And? What's in the room?

Caboose: There are some walls, and some ceilings. Wait- just one ceiling.

Sarge: Caboose, I have a very bad feeling abou-

The blues emerge from their base firing on all cylinders, yelling CHARGE! and similar optimistic battle-cries. The reds do the same. A blatant firefight ensues

Sarge: Come on Caboose, we gotta get to higher ground!

A blue soldier: Yeah I love reloading, I love to reload!

The newly fallen blue soldier: D'oh, tell my girlfriend that I love her.

Sarge: Come on Caboose! (they run up a convenient ladder)

The Soldiers: (random shouts and jeers)

Caboose: Sarge... I am scared of our new friends.

A red soldier emerges from the blue base with their flag

A red soldier: It's more beautiful than I ever imagined!

The red flag bearer: I have seen the top of the mountain! And you will worship me as though I were a God!

The poor red dude is mobbed by four blues at once, WWE-style, and taken down

The red flag bearer: I regret nothing! I lived as few men dare to dream!

Red guy: Hell yeah! (gets shot in the back of the head) Oh no!

The blue sniper: Head shot! (gets shot in the feet by a rocket) Oh, you rocket-whore!

A Blue guy: Hey I got some, you want some? I got some for you! Come on you!

A Red guy: The only good blue is a dead blue!

Cut to a red and a blue on either side of a rock alternating standing up firing and crouching so the other guy can fire. The blue guy is killed by a grenade from behind

Other Red guy: I didn't see your name on it! (gets shot by a camper from behind a rock) Oh you fucking camping bitch!

Blue camper: It's a legitimate strategy! (gets shot at rounding a rock) Whoa!

Blue guy: What do you mean?

They meet in the stream

Blue guy: What did you mean we could work as a team?

Red guy: I bash you in the head with my rifle and you die. Good teamwork you fucking noob. Good game, good game everybody! GG man, GG. (takes a hit from nowhere in the back of the head and falls over)

Sarge: I have no earthly idea what it is I just saw, or what this place is, or where in the Hell O'Malley is! My only choice is to blame Grif, for coming up with such a flawed plan. Stupid, stupid Grif.

Caboose: I am so confused. Where is Church? I need Church to tell me what to think. Church could handle this. He can handle anything!

Cut to Church and Grif in jail

Grif: Yeah, let him out. He's driving me nuts!

Church: Oh shut up, red, nobody asked you.

Grif: I should have never listened to Donut's stupid fucking plan.

Blue soldier 3: So cool, this is so cool!

Blue soldier 1: This is our game, man, I guarantee I'm gonna kill all those guys!

Blue soldier 2: We must protect this house!

Blue soldiers: We must protect this house!

Blue soldier 4: We must protect this houuuuse!

Blue soldier 1: We must protect this house.

Blue soldier 4: This is our house.

Blue soldier 1: That was too much, wasn't it. Alright, let's go baby we've got this one. This one's ours. You all ready?

Blue soldier 1: Are you ready?

Blue soldier 1: Are you ready? 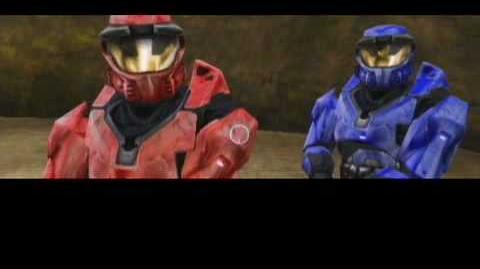 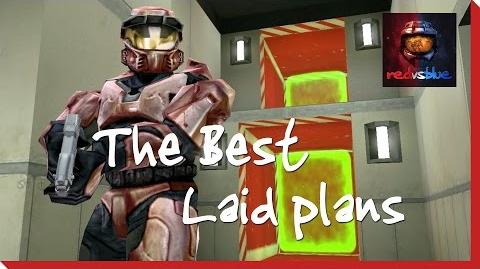 The Best Laid Plans - Episode 39 - Red vs. Blue Season 3
Remastered
Add a photo to this gallery
Retrieved from "https://rvb.fandom.com/wiki/The_Best_Laid_Plans?oldid=135483"
Community content is available under CC-BY-SA unless otherwise noted.