The Arrival is the twentieth and final episode of the fourth season and the seventy-seventh of The Blood Gulch Chronicles.

The episode begins as Doc tries to convince an incredulous Church of Tucker's pregnancy. When Doc discloses the truth to Tucker, he does not believe him either, thinking he himself has impregnated someone and invents excuses. Caboose enters the base in tears with the skull, asking for help, proclaiming that Andy is dead. After Caboose explains how he found the skull, Church leaves the base.

Meanwhile, Andy plays back the message from Command in English for the Reds. After hearing the generic instructions, Sarge becomes depressed, and while Grif tries to cheer him up, Donut spots Church approaching with Sheila. Sheila then fires, frightening the Red Team, which regroups behind a rock formation. Sarge calls for reinforcements, and Simmons attempts to negotiate a surrender from the Blues. Annoyed, Church explains what has just occurred back at his base. To Church's dismay, Andy lets slip that it is possible for Tucker to be pregnant, as the Alien's race propagates by infecting other life-forms with parasitic embryos. Caboose then calls Church to inform him that O'Malley has moved to another host as the Reds had been using their radios, and that Tucker had his baby. Higher-pitched Alien speech can be heard off-screen. Church returns to Blue Base, and Donut follows him, wanting to see the baby. Sarge stops him, and orders him to wait for the ship being sent by Command. Donut argues that it could be weeks, even months before the ship arrives. A ship then promptly lands on top of Donut.

Fade in to a wide shot of Blue Base

Church: Uhh, I don't believe this.

Doc: It's true, your friend Tucker is pregnant. See, my little gizmo lights up green to indicate pregnancy.

Church: I thought it lights up green to indicate flesh wounds.

Doc: Hyeah, it lights up green for just about everything. It takes a while to figure out the difference. Doc starts using his medical tool. Like this green, indicates a high level of anger stemming from suppressed feelings of inadequacy.

Church: If that thing keeps talking bad about me, I'm gonna fucking smash it!

Doc: See, these tools can be confusing sometimes. That's why doctors have to go to school for so long. Not that I'm actually a doctor, mind you.

Church: And that's never been more apparent than with this diagnosis.

Tucker: It's not mine, I wasn't even in town that weekend.

Church: Tucker don't listen to him, he's a lunatic, man, he's got no idea what he's talkin' about.

Doc: Uh, you want me to go over the green light thing again?

Doc: Uh, I don't know what I can really do to help him, my first aid procedures aren't very effective after decomposition.

Church: Where did you get that?

Tucker: It's not mine, we weren't even going steady!

Tucker: Hey look man, I've been saying that for a long time, it's gonna take a little while to get used to this.

Church: You're not pregnant.

Caboose: I was just standing outside the base, and someone told me to turn around and when I did, Andy...

Church: Whoa wait, who told you to turn around?

Caboose: I don't know! But they were very helpful.

Church: And let me guess, when you turned back around, Andy was gone.

Church: Huhh, everybody stay here. I'll be right back.

Doc: Wait, what do you want me to do about the pregnant guy?

Tucker: It's not mine.

Church: He is not pregnant!

Caboose: And what about Andy?

Tucker: Ahw, would this be a bad time to mention that my stomach just started hurting really bad?

Caboose: How can you think of soup at a time like this?

Andy/Vic: Here are your orders for winning the war. Eliminate the enemy. Okay, also, try to do better than you are currently doing. And, please win, thank you.

Simmons: I don't know 'bout that Grif, I think there was actually some valuable tactical information in there. Right Sarge?

Sarge: Simmons have you lost your last marble? That was pure nonsense!

Simmons: Oh, that's what I meant.

Sarge: Eliminate the enemy, what kinda plan is that? I think Command has lost it.

Grif: Lost it? When did they have it?

Donut: Uh, speaking of the enemy, here comes one now!

Grif: Hey, let's eliminate him! Then we'll have one less thing in the to-do list!

Sarge: Uhh, I'm just so depressed. I can't even threaten your life for being a total jackass....Jackass. I'll kill ya!

Donut: Nah, I don't think eliminating him is gonna be easy. It looks like he's bringing his tank with him.

Simmons: What're you talking about Donut, the tank isn't coming out here. Look it's not even moving.

Grif: Hey Sarge, cheer up, I've known Command was stupid all along. It can be hard at first but you'll get used to it.

Simmons: Donut, I am looking, if it was getting closer, it would be getting bigger.

Donut: It is getting bigger, compared to that tree!

Simmons: What tree, there aren't any trees out here!

Grif: You wanna call me an idiot, Sarge? That always makes ya feel better.

Sarge: Yeah, I guess a little.

Sheila fires in to the rock behind Simmons and Donut

Simmons: Okay, you're right, it's coming this way.

The Reds scatter ... all behind a single rock.

Simmons: Not the fucking tank!

Cut to the Reds behind their rock

Sarge: Simmons, pass out the ammo you brought because you knew Grif would forget.

Simmons: Already on it, Sir.

Simmons: Okay, how 'bout we give them our base?

Donut: Oh, good idea! We could live in the caves!

Simmons: We could let them kill Grif!

Sarge: Simmons you're supposed to negotiate their surrender, not ours! Vic, are you still there?

Simmons', Grif's, and Donut's heads emerge right to left from above their rock in a comical way

Simmons: Hey Blues!- Up- I mean, Blue! We're only gonna give you one chance to surrender!

Church: Wha- why would I-

Church: Hey, hold on a second Sheila. Why would I surrender!?

Simmons: Uh, because you're outnumbered!

Church: Bullshit dude, I got a tank! People with tanks are never outnumbered!

Simmons: We also think that it's your turn to surrender.

Church: Sheila, shut him up.

Sheila fires at them

Simmons: Son of a bitch!

Donut: Is that a no?

Church: Okay look guys, I don't mean to be rude, but I've got a missing girlfriend, a guy who's pregnant, an idiot who thinks his pet just died, and our worst enemy is hanging out unsupervised at our base right now. So I really, really, REALLY, don't have time for this horseshit right now!

Grif: Uh, what was that part about the pregnant guy?

Andy: (laughing) Yeah, unless the Alien impregnated him. That's what they do, they infect the host with a parasitic embryo. Hahaha! But you already knew that, right? Right?

Church: What? NO! Why didn't you tell us that could happen?!

Caboose: Come in Church, come in.

Church: Caboose, what did I tell you, man, you're not supposed to use the radio while O'Malley's here! Oh great - now I'm on the radio too.

Caboose: Oh that- that's what I'm calling to tell you. Um, the Reds already used their radio aaand, O'Malley is gone.

Sarge: That's right Blue, we've called in the cavalry. As we speak, the glorious Red Command is sending a ship to aid us! No doubt it's a battle cruiser of the highest magnitude! It's time to end this thing once and for all!

Cuts to Blue Base where Tucker is giving birth to the alien baby.

Doc: Congratulations, it's a - thing. Eugh.

Church: What was that?

Caboose: Oh, well, that's the other thing I called about, um, Tucker had his gross baby.

Tucker: It's not mine!

Church: He is not PREGNANT! Sheila? Stay here. If anybody moves, shoot 'em.

Sarge: Donut, get back here! Wait for the ship.

Donut: But Sarge, we don't know when the ship is gonna get here. It's coming all the way from Earth. That could take days, or weeks, or months, or even years! 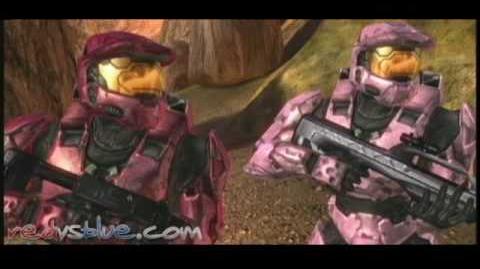 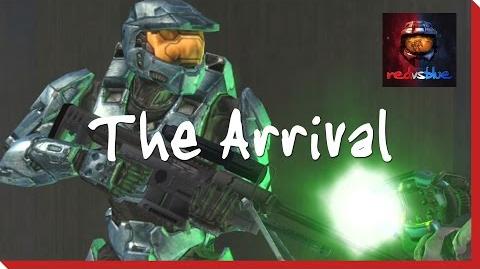 The Arrival - Episode 77 - Red vs. Blue Season 4
Remastered
Add a photo to this gallery
Retrieved from "https://rvb.fandom.com/wiki/The_Arrival?oldid=140973"
Community content is available under CC-BY-SA unless otherwise noted.