The Reds, Washington, Federal Army and New Republic arrive at the Desert Refueling Station in order to refuel their vehicles. Wash approaches the Reds and updates them on the status of Carolina, Dr. Grey, and the Blues, detailing their discovery of a large jungle temple emitting energy into the sky. Wash then expresses his admiration for the Reds for their decision to fight with the two armies, and recollects on their past experiences together. Seeing through his sentimentality, Grif and Simmons realize that Wash believes they will die on the mission, but Wash quickly denies this. Wash then asks what unit they're in, in which Sarge states that he's volunteered them for the front lines, shocking Grif and Simmons. Wash suggests they look on the bright side but fails to follow up to what the bright side is.

Meanwhile, at the jungle temple, Dr. Grey informs Carolina and the Blues of the temple's rules, after deciphering them. Tucker suggests that he fits the bill of being a true warrior simply because he possesses the sword. The others go along with it and allow Tucker to enter. However, Tucker is quickly forced out after entry and tells the others that he saw multiple illusions of Felix and Locus while on the other side, who all quickly overwhelmed him. As a result, Carolina decides to enter the portal herself, hoping for a rematch.

Upon entry, Carolina immediately loses contact with Epsilon and is soon spoken to by a booming alien voice, who questions her on who she is. Carolina states that she is his true warrior but an illusion of Tex appears and states otherwise, shocking Carolina. Suddenly, the rest of the Freelancers appear behind Carolina, shocking her even more. After Carolina returns from the portal, Epsilon, having only seen static after entering, questons her on what she saw, but Carolina refuses to discuss it. As a result, the group decide to send Caboose through, believing his strength and "empty head" may correspond with the instructions.

After Caboose enters the portal he is spoken to by the alien voice, who quickly becomes amazed at the state of Caboose's mind, lacking any fear, self-doubt, or negativity. In addition, the alien voice also expresses his surprise of Caboose's physical strength, stating that his action of increasing the gravity had no affect on the latter. Due to this, the alien reveals himself to Caboose and proclaims him to be a true warrior. Upon exiting the portal Caboose reveals the alien to the others, which he named Santa. Santa greets the group and explains that he is actually an A.I. construct left on Chorus by his Creators to ensure that their relics are passed down to those they deem worthy. While the group is dumbfounded at the fact that the A.I. is named Santa, Santa bows down to the noble warriors.

Fade in to reveal the Red Team, Rebels, and Feds driving towards the Desert Refueling Station. Cut to the Reds, dismounted on their warthog, huddled up. The Rebels, Feds, and Washington dismount from their warthogs as well.

Sarge: Now look, the fact of the matter is the ability to fly north, and only north, is just gonna lead to more problems than it solves.

Grif: Whatever, this road trip sucks!

Sarge: Nonsense! Road trips are an inherent part of the Red Team experience. Enjoy the exotic sights and sounds of this beautiful, albeit wartorn, land.

Grif: It's a gas station... that we've been to before! Seriously, there's like three places to go on the whole planet!

Simmons: Any word from the away team?

Washington: They found some sort of giant alien temple shooting pure energy into the sky.

Washington: You know, I think it's really admirable that you all choose to stay and fight for the people of Chorus.

Washington: When I first met you all, I honestly thought you'd never amount to anything but you've really proven me wrong.

Washington: Sure, you may not be the most conventional soldiers but no matter the challenge you always manage to find a way to come out on top. And that's something really special.

Sarge: What's going on with you?

Simmons: No, you're acting really weird.

Washington: I just want you all to know how much I appreciate you. (brief pause) That's it.

Washington: (quickly) No, I don't!

Grif: No, you do, you definitely do! You're getting all sentimental and shit!

Washington: Nooooo, guys. Come on, you'll be fine! I've got total faith in you. You're some of the best solders I ever knew.

Simmons: WHAT THE FUCK IS THAT PAST TENSE BULLSHIT?!

Washington: Look, I just want you to know, I'm proud of you. I'm sure if you stick together, you'll be okay. What unit are you in?

Sarge: Volunteered for the front lines!

Washington: Well, look on the bright side!

Grif: You know, if you say that, you're supposed to follow it up with the bright side!

Cut to the Blues and Dr. Grey at the Jungle Temple.

Tucker: What? Obviously I'm a true warrior. Plus, I got the sword. That means I'm the chosen one.

Epsilon: Finding a sword in a hole doesn't automatically make you an unstoppable badass.

Tucker: Oh, why don't you tell that to the last alien temple I lit up!

Grey: Tucker has a point. It's possible that merely carrying the sword through the portal will override the need to be strong and intelligent.

Caboose: Eh, you have your moments,

Epsilon: Well, we're low on time and it's the best thing we've got.

Tucker: Nothing to worry about baby. (lights up the sword) I am a true motherfucking warrior.

Tucker jumps into the portal screaming and is almost instantly thrown out of it, hitting a boulder.

Tucker: (stands up) Whoa! What happened?

Carolina: Apparently, you're not a true warrior.

Caboose: Or maybe he's so good he passed the test super fast.

Grey: What did you see? Tell me about the other side. Did you make contact? Oh and how are you feeling?

Carolina: The mercenaries were already there?

Tucker: Well, I don't think it was really him. He showed up, then another Felix showed up. And the next thing I know there were a million fucking assholes all over me. Same thing with Locus, I couldn't fight them off!

Carolina: Well, I am. And I've been waiting for a rematch.

Flash cut to Carolina in more or less the same place Locus wound up in. She raises her rifle.

Alien Voice: WHO ARE YOU?

Suddenly, Tex walks out of a corner.

Tex: Actually, that would be me.

Carolina turns around, lowering her rifle. She's looking at all of her old Freelancer teammates: York, the Twins, Maine, Wyoming, C.T. and Florida. Cut to Carolina, outside the beam, talking with the rest.

Carolina: I said I don't want to talk about it.

Epsilon: Carolina, all I saw, when I went through was static. You gotta tell us more! You saw the Freelancers, then what happened? Was there crazy karate? Big gunfight?

Carolina: No, there was no fighting. They just... look, it doesn't matter.

Carolina: I will throw your ass right back through that portal if you don't-

Grey: We can't give up hope. The government spent ample time studying these relics and we've only been here a few hours!

Tucker: Did they make any progress?

Grey: Actually they got fed up and abandoned all of their work. (Cut to reveal a crate with a note saying "Will return in: FUCK YOU!")

Epsilon: I just wish the inscriptions weren't so vague. True warrior? Mental clarity? What does that even mean?

Caboose: Uh yeah, I'm pretty sure it's the opposite of false warrior. Duh.

Caboose: Yeah, I'm just saying we can at least cross that off the list. You know.

Caboose: The false warrior. That is.

Caboose: Well excuse me for trying to help! I am going to go find the bathroom. (walks away)

They all look at each other.

Flash cut to Caboose having entered the portal.

Caboose: Hey, this isn't the bathroom.

Alien Voice: WHO ARE YOU?

Alien Voice: Hmm, you are not like the others.

Caboose: I'm sorry what you were saying something?

Alien Voice: And your strength.

Caboose: Yeah. I have been told, that I am an excellent listener.

Caboose: What a tenfold is? You know I-I don't know you. You're the one who brought it up.

Alien Voice: Hmm. Then it seems that you (a red light matterializes in front of Caboose, taking the form of an alien) are a true warrior.

Caboose: And we're back!

Grey: Are you okay?

Caboose: Ah, well ah yeah, I went to the bathroom and then I met an alien and we became friends and he told me everything about the universe and the meaning of life and then-

The alien A.I. appears behind Caboose.

Everyone takes a step back, taken by surprise.

Alien A.I.: My apologies, but is there anyone else I could speak to? Perhaps someone with a broader vocabulary?

Carolina: Who- What are you?

Alien A.I.: Correct. I'm a construct left behind by my creators to ensure that their gifts are passed on only to those who are worthy.

Caboose: Yes. And that is why I have named him: Santa.

A brief moment of silence occurs.

Santa: It is an honor to meet you, noble warriors. (bows in front of the Blues and Dr. Grey) 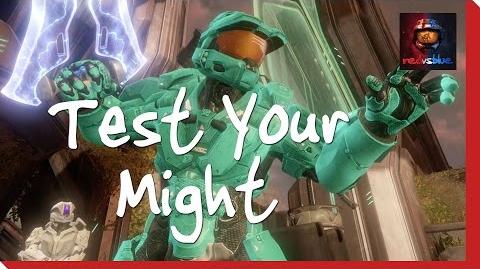