Talk of the Town is the twelfth episode of the fourth season and the sixty-ninth of The Blood Gulch Chronicles.

In the basement of Blue Base in Blood Gulch, Simmons covertly talks to Donut about keeping his true identity hidden from Church. Donut, however, does not actually recognize Simmons. Church soon appears after dropping Sarge's body into the basement, and the three proceed to load Sarge and Grif into the warthog.

Meanwhile, the Sacred Quest team reaches the edge of the "Great Freezing Plains" that The Alien had mentioned. This particular part of the quest requires that the hero gain access to the temple ahead, which is heavily guarded by a large number of Zealots. With this information, Tucker wants to retrace their steps to recover a mitten that Caboose lost, but Tex takes the initiative and decides to attack the temple guards under the protection of her cloaking device.

Back at Blood Gulch, Church and Simmons drop off Donut and the still-unconscious Sarge and Grif outside Red Base. Church suggests to Donut that he lie to Sarge and Grif when they wake up, making them think he rescued them. Donut asks what Church wants, based on the precedent set by the Blues' surrender in Episode 22. Church, considering the Reds' failed rescue mission not so much a surrender but a "total ass-kicking," decides to keep the Reds' jeep, causing Donut much despair. As Sarge begins to recover, the episode ends with Simmons knocking him out again in order to protect the secrecy of his identity.

Fade in to Blue Base in the Gulch

Simmons: Listen Donut, Church thinks I'm a blue guy, so whatever you do, just pretend like you don't know me.

Donut: I don't know you.

Donut: No, I'm serious, I have no idea who you are.

Sarge's body falls down from the ceiling in the background.

Donut: So does that mean you're not gonna tell me who you are?

Church: Euh, you know I could have used some help new guy, thanks.

Simmons: (in a weird voice) I was just securing this prisoner. Which is interesting, considering that I have never met him before.

Church: Why is that interesting?

Simmons: (in the same weird voice) I don't know.

Church: ...Is something wrong with your voice?

Simmons: Oh I was just disguising it, so the prisoner wouldn't think he knew me.

Simmons: But he doesn't. Do you prisoner?

Donut: Wait, is this some really weird form of torture?

Church: Well, okay, help me load these guys in the jeep before they wake up.

Cut to Crunchbite leading Tucker, Caboose and Tex through a tunnel of some sort

Andy: Step it up guys, we're almost there.

Tucker: I'm tellin' you, the alien has really been creepin' me out lately. Every time I wake up he's hovering over me. It's really weird.

Tex: I'm sure he's just safeguarding his sword. I mean, my sword.

Caboose: Maybe he just wants to steal your breath.

Tucker: Maybe he's trying to figure out what I taste like.

Andy: Hurry up ya idiots.

Tucker: Man, did it get a lot colder all of a sudden?

Andy: Of course it did. They don't call it the Great Freezin' Plains for nothin'.

Tex: The snow is the least of our problems.

Tex: I assume we have to get in to that big temple base thing?

Tex: Well, it's got about two dozen guards on its walls.

Tucker: Caboose we've been walking for days. We're not goin' back for anything.

Andy: I say we let Tucker storm in and take 'em out in a mad rush, and while he's got 'em distracted, we finish the quest.

Tucker: On second thought, personal warmth is very important. Let's go get that mitten! It'll be like a mini-quest.

Tex: I think surprise is the key.

Andy: What ya thinkin'?

Tex: Let me take them out, one by one. They will never know what hit them.

Andy: Ya think you can kill 'em all without alerting the rest?

Andy: How can I watch ya, you just turned invisible.

Tucker: And yet, I was still able to check out her ass. That's why I'm a pro.

Cut back to the Gulch, where Church and Simmons are dropping off the Reds in front of their base.

Church: Okay, Donut, wait until we're gone, and then you can wake 'em up.

Donut: Well what do I tell them?

Church: I don't care, tell 'em you busted in and rescued them. Get yourself a medal. You deserve it.

Donut: I always did wanna be a hero... and a liar.

Church: Well then, it's your lucky day.

Donut: Don't you want anything?

Donut: Well, every time someone surrenders they take somethin'. Like when we took the medic, and you guys took Grif's dignity.

Simmons: Hyeah, like that ever existed. Uhhh, I mean, which one is Grif? Is he the yellow one?

Donut: And this time you guys don't want anything?

Church: Well, technically you're not surrendering. This is what we call in the Military, a "total asskicking." Oh, and also, we're taking your car.

Donut: What? You're leaving us out here, without any transportation? We'll die!

Church: Die of what?

Church: Your base is right there, I can see it.

Donut: You may as well just feed us to the buzzards right now!

Church: You could have walked back to the base in the time we've been discussing this.

Simmons: (whispering) Sorry about this Sarge, but look at it this way, you were right; this does hurt you more than me.

Sarge: Is that you, Simmo- (smacked in the head) goh, knocked out again. 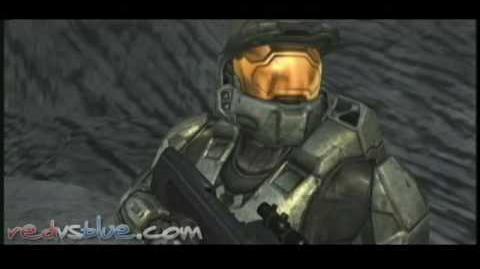 Talk of the Town
Original 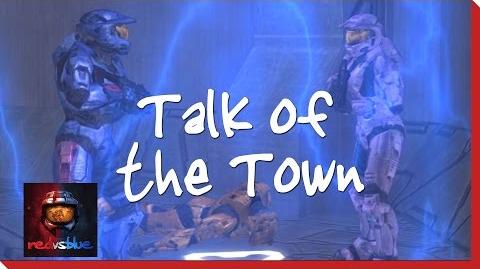 Talk of the Town - Episode 69 - Red vs. Blue Season 4
Remastered
Add a photo to this gallery
Retrieved from "https://rvb.fandom.com/wiki/Talk_of_the_Town?oldid=135655"
Community content is available under CC-BY-SA unless otherwise noted.