Sweet Ride is the fifth episode of the second season and the twenty-fourth of The Blood Gulch Chronicles.

Sarge reveals to the Reds that he had built a remote control within the warthog in order for Lopez to control the vehicle remotely. Sarge is baffled as to how the vehicle was activated, stating that he had hid the switch where "no one would ever look" on Lopez's body. He turns to Donut, suspiciously asking if he was "messing" with Lopez. Donut is confused as to why he would be asked. Grif asks if someone is actually controlling their jeep, and points out that whoever does has control -has control of the mounted turret as well.

Meanwhile, at Blue Base, Church continues to hear the beeping noises and asks if Tucker and Caboose hear it as well. Tucker tries to help by describing the sound to him, but utterly fails, as he obviously doesn't hear it at all. Caboose, however, reveals that he hears a voice telling him to kill all of his friends before they have a chance to kill him. Church and Tucker are dumbfounded after hearing this. Caboose is confused, having thought that they can hear the voice along with him. Church then asks Tucker if he can stop the beeping noise, as it is driving him crazy.

Immediately after Church says the word "driving", the warthog back at Red Base acknowledges the command to "Drive". Sarge is surprised to have someone "figure" out his code for their vehicle. The warthog then drives off, inadvertently knocking Doc onto the drivers side. Simmons then suggests a new rule to Sarge to not take anymore prisoners, as they seemingly suck at it.

Back at Blue Base, Caboose finds the switch on Church's body. Church stops him. Upon hearing the word "stop", the warthog comes to a halt in the middle of the canyon. Church then asks Caboose if he knows how to flip a switch, but Caboose is clueless. Church then gives him instructions on how to do so, telling him to simply turn the switch around. The warthog then receives the command to "Turn around" and proceeds to do so. Caboose flips the switch, but it breaks. Doc, still in the warthog, faces a nervous Red Team as the warthog waits for a next command. Tuckers helps Caboose and points out that there are two wires sticking out of the switch, one green and one red. Church tells them to yank whichever one is attached to the switch, but Tucker can not tell which one goes to the switch itself. Church tells them to yank them both. Caboose is worried, telling Church that he might "explode" if they pull the wrong one. Church then tells him to pick the "red one" (wire) and follow it. The warthog then receives the order to acquire a "red" target, which prompts Grif to tell Sarge to run away, as he is wearing red armor.

Tucker follows the red wire and finds that it leads to the switch, while the green wire leads "somewhere" else. Church tells him to pull the red wire out of him along with the switch.

As the rest of Red Team start to back away out of fear, the warthog rams into Sarge, pinning him against the side of Red Base. The warthog then revs up its mounted turret and fires at the wall next to Sarge, slowly moving its barrel towards him. Sarge, unable to move, despairingly points out the irony of being killed by his own "mechanical creations" and that there is a "philosophical lesson" to be learned because of it. Simmons ignorantly asks if the lesson is "about the dangers of technology and the unwavering pride of mankind". Sarge tells him no, and quickly tells the Red's to help him before he dies.

The Warthog faces the Reds and Doc.

Simmons: Okay, I get it. You built a remote control for the jeep into Lopez.

Sarge: Yep. But there's no way anyone could have found out how to turn it on. I hid it in a place no one would ever look. Unless... (turns to Donut) Hey, Pretty-in-Pink, were you messin' with my robot?

Donut: What're you asking me for?

Grif: So someone else controls the jeep right now? And the big gun attached to it?

Sarge: Oh, get a pair, you bunch o' Barbies. Even if they've figured out how to turn it on, they'd never know the set of code words to control it. Only me and my diary know that.

Cut to Church, Tucker, and Caboose standing on top of Blue Base, a beeping noise is heard very faintly in the background.

Church: There, you hear that?

Tucker: Is it like a screaming, high pitched whistling noise followed by a series of random clicks?

Church: No, it's just like this constant "beep beep beep" noise.

Tucker: Oh. Then no, I don't hear anything.

Church: Do you eh, wait - do you actually hear a series of whistling noises followed by some random clicks?

Tucker: No, I was just tryin' to be helpful.

Caboose: All I hear is that voice, you know, telling us to kill all of our friends before they have a chance to kill us.

Church: Oh man, I can't take this any more. Tucker, you're gonna have to do something, man, this beeping is going to drive me crazy.

Warthog: (emits a series of beeps like the beginning of a dial-up connection) Drive.

The Warthog drives straight at Doc and hits him. He lands in the driver's seat as it continues driving away with him

Doc: Help, this jeep is kidnapping me!

Donut: Now he's taunting us. This is just embarrassing.

Simmons: Hey, Sarge, new rule. (camera shows the Reds watching the Warthog drive off into the middle of the canyon) How 'bout we just don't take any more prisoners, since we seem to suck at it.

Cut to the Blues. Caboose is kneeling in front of Church. The beeping is still present.

Caboose: I see a switch down here. (whispers loudly) It's not very big.

Warthog: (in background, in the middle of the canyon, emits its series of beeps) Stop. (stops moving)

Church: Caboose... do you know how to work a switch?

Church: Alright. Here's a full tutorial then. The switch is pointed in one direction, just turn it around so that it's pointed in the other direction.

Warthog: Turn around. (starts turning around)

Caboose: (a small metallic noise is heard) Oops. (there's the sound of electricity) It broke itself.

Cut to the Warthog as it finishes turning, now facing the Reds.

Cut to a close up of the Reds.

Cut to the Blues. Tucker and Caboose are kneeling next to Church.

Caboose: What about the blue one?

Church: Come on, guys, just grab whichever one goes to the switch, and yank it out.

Tucker: Eh, I can't tell which one goes over there.

Church: Then just yank 'em both.

Caboose: (stands up) Church, if we pick the wrong one.. (whispers) You could explode.

Church: I don't care, look, just follow the red one.

Cut to the Warthog.

Grif: Uh, Sarge, y-you, you may wanna start running. (Donut and Simmons back away) Now. (backs away also)

Cut to the Blues. Caboose is kneeling again.

Tucker: Okay, I see what's going on here. The red one goes close to the switch, and the green one goes.. eugh, someplace else.

Church: Fine, just pull it. Take out the red one.

Cut to the Warthog ramming Sarge into the wall of Red Base.

Grif: You're gonna kill him!

Sarge: What a way to go. Killed by my own mechanical creations. I'm sure there's a philosophical lesson to be learned from all this.

Simmons: Something about the dangers of technology and the unwavering pride of mankind?

Sarge: No, something about hiring better help that doesn't just stand around watching you die! 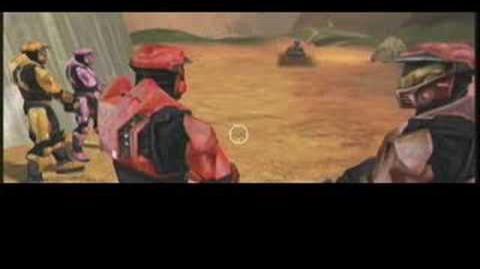 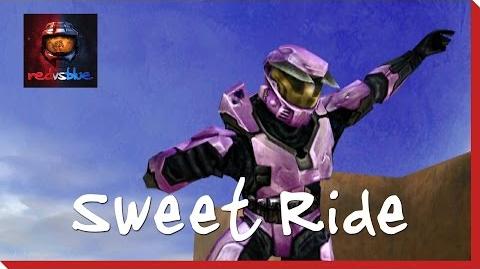 Sweet Ride - Episode 24 - Red vs. Blue Season 2
Remastered
Add a photo to this gallery
Retrieved from "https://rvb.fandom.com/wiki/Sweet_Ride?oldid=135620"
Community content is available under CC-BY-SA unless otherwise noted.