Snooze Button is the twelfth chapter of Red vs. Blue: Revelation and the 165th episode overall. The episode aired on July 12, 2010.

Epsilon awakens in a strange glowing room, where F.I.L.S.S. explains that safety protocols were initiated (by Caboose) and that he is now in Recovery mode, telling Church that he can only leave if a Recovery Agent extracts him or his operator regains consciousness. Fearful that F.I.L.S.S. activated a Recovery Beacon, Church is relieved to hear that Recovery beacons only activate after an AI unit leaves the Facility. He then spots Tex in the same room with him and attempts to communicate with her via F.I.L.S.S. However, Tex refuses to accept the communication, and F.I.L.S.S. advises Church not to take any more action. Church then asks F.I.L.S.S to get him out of Recovery mode, but to leave Tex there until he can come up with a plan on what to do with her.

Meanwhile, at the desert, Washington and Doc stand outside of the temple, with Doc refusing to enter, the Meta refusing to come out of the temple, and Washington beginning to get frustrated at the situation. Doc recommends that Washington give the Meta a back rub to calm him down, while Wash demands that Doc calms him down as he is trained in stress management (Doc says that stress management only works on people that want to feel calm). Wash then politely asks the Meta to come out of the Temple, and the Meta's response is to throw something at the two of them. As it turns out, it is the empty Epsilon unit.

Back at the Facility, Church and Tucker have been released from lockdown. They then walk over to the Reds, who are all still in lockdown mode. The Reds are then seen in Recovery mode, however Sarge claims that they are dead, which he thinks is good news for him considering that Grif is dead, but bad news overall. Simmons is very unhappy over the fact that he had so many more things in life to accomplish that didn't involve a computer, where as Grif thinks that it is terrific and then proceeds to take a nap as Sarge always told him that he "could sleep when he was dead". Church then contacts the group outside of lockdown and tells them that he will only let them out if they all promise that they won't attack the Blues or Tex, which they all reluctantly agree.

Church: What happened? Where am I?

Church: Sheila, is that you?

Church: What is this place?

F.I.L.S.S: Your operator has been injured or incapacitated, and you are now in Recovery Mode.You will remain in this state until such time as you can be extracted by a Recovery Agent, or your operator regains consciousness.

Church: Wait! You didn't send a Recovery Beacon did you!? Because that would be really -

F.I.L.S.S: Recovery Beacons only arm once a unit leaves the facility.This unit has yet to leave this facility. therefore we must first...

Church: Yeah, yeah I got it. Is that Tex?

F.I.L.S.S: Affirmative. Technically, she is not present in this environment, but if you would like to speak to her I can relay communication through external channel.

F.I.L.S.S: I am sorry but she has refused the connection. She should not be able to do that.

Church: Yeah, that's not surprising. Can you force it through?

F.I.L.S.S: I can try, but I would not recommend that action.

F.I.L.S.S: No, I just have learned that if a woman wants to be alone, it is best to leave her alone.

Church: Yeah, good call. Hey get me out of this but, uh, leave her in here until I figure out what to do with her.

Church: Uhh, she didn't hear that did she?

Church: I thought you weren't relaying my messages!

Church: You women always stick together. Oh man, I hope she didn't hear that.

Cut to Washington at the desert.

Washington: Are you going in or not?

Washington: Meta, get out here!

Doc: Yeah, definitely gonna stick with not. That seems like the best one of those two choices that you gave me.

Washington: Get in there.

Doc: Tell you what, put me back in the wall, I like the wall. It was cozy and it protected me. I miss my wall...

Washington: You are utterly useless. I know we brought you along for a reason, but for the life of me, I can't remember what it is.

Doc: The important thing is we're becoming friends. They say the bonds of men in combat are as strong as brotherhood!

Washington: Meta get out here... please...

Doc: Voice sounds tense. Maybe you should give him a back rub. That wouldn't be weird, right? One Freelancer giving another a back rub?

Washington: Aren't you trained in stress management or something? Calm him down!

Doc: That only works if the person wants to be calm. I don't think he qualifies.

Washington: Listen, Meta, whatever you found, we can deal with it, I promise. Just come out here and show me what it is.

Meta throws something at Washington and Doc.

Washington and Doc stare at the Epsilon module.

Washington: Oh. You found... that.

Scene cuts to Chuch and Tucker.

Tucker: Oh oh god, that sucked! What was all that glowing shit?

Church: Sheila put us in lock-down to save us.

Tucker: She knocked us out to help us? That makes sense.

Church: Hey, at least we're not getting our asses kicked okay? That's an improvement.

They walk over to the Reds.

Church: Sheila, can they, ahh... can they hear me?

Tucker: We heard her dipshit!

Caboose: I know! I just want to use the microphone! It makes me sound super loud! I'm not sure if you can tell!

Tucker: Hey, where'd you get the new body?

Tucker: Man, I know I asked but I really don't give a shit, Church.

Caboose: Attention Freelancer shoppers! We have a special on submachine guns in aisle seven!

Scene cuts to the Reds in Recovery Mode.

Simmons: Sarge, where are we?

Sarge: Men, I have bad news for all of us - we're dead. Which in the case of Grif is good news for me. But still, bad news overall.

Simmons: Dead?! I can't be dead! I still have so much to do!

Simmons: Like... everything that doesn't involve a computer...man, it's been a real one-track life for me.

Grif: So this is the after-life, huh? Not bad, it's kind of grainy. Overall, I cant complain.

Sarge: This is just the stage before we move on, like purgatory.

Simmons: Ooo, or like the last episode of Lost.

Sarge: Hey! I haven't seen that yet! No Spoilers!

Simmons: That show was on hundreds of years ago!

Simmons: Give me a break!

Grif: Sorry Sarge, but you always said I can sleep when I was dead. Hey, guess what? I am dead. So this purgatory is about to become purga-snory.Yawn...

Church: Hey Reds! Can you hear me?

Sarge: Who in Sam Heaven is that?

Simmons: Is that God?

Grif: Hey almighty, can it! Some of us are trying to get a little shut eye.

Simmons: What do you want God? Take Grif, he's been terrible! I mean great!

Tucker: It's not God dude, its Church. He just thinks he's God.

Scene returns to Church and Tucker

Tucker: Pfft, this is just what you need, more people worshipping you.

Church: Yeah, hey listen, we want to let you out, but we don't want you to attack us or attack Tex, OK?

Simmons: Attack Tex? She attacked us!

Sarge: I would never hit a girl!

Church: Just agree and we'll let you out.

Church: I'm gonna assume that last one was a yes. Alright, let 'em out Sheila!

Sarge: Ahh! My neck was killing me! 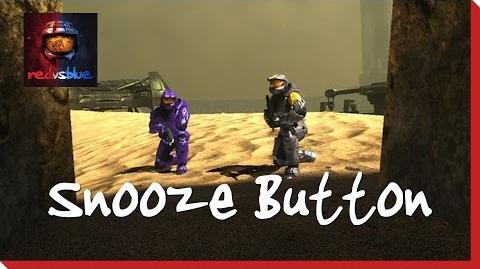 Retrieved from "https://rvb.fandom.com/wiki/Snooze_Button?oldid=146588"
Community content is available under CC-BY-SA unless otherwise noted.