Sneaking In is the thirteenth episode of the fourth season and the seventieth of The Blood Gulch Chronicles.

Back at the Great Freezing Plains, Tex attempts her covert attack inside the temple guarded by the red and blue Grunts who first appeared at Battle Creek. Sneaking up behind a blue Grunt, she attempts to knock him out, without much success. Although she has to spend time beating and shooting him, the others pay no attention to his exclamations of pain and agony. It is only when Tucker speaks in reaction to their aloofness that they begin to fire. Now under attack, the rest of Sacred Quest team runs for cover while Tex kills the remaining soldiers in the temple.

In Blood Gulch, Donut, apparently having taken Church's advice to lie and portray himself as a hero, is finishing his debriefing with Sarge and Grif. While the Reds discuss and mock Donut's contrived story, Church briefs Simmons on each Red Team soldier, finishing with a critical opinion of Simmons. His ego thus wounded, the latter runs back to Blue Base to cry. Once out of Simmons's earshot, Sheila asks Church whether he realizes that he had been talking to Simmons. Church confirms that he does.

Red Grunt: Your wall's easy to guard, try ours!

Blue Grunt 2: You don't even have a roof up there, you suck. What're you guarding it from, birds?

Red Grunt: We suck. No you suck.

Tucker: Oh, those guys? How did they get here?

Caboose: Shush. Tex told us to be quiet.

Tucker: Caboose, we're three hundred yards away. I don't think they heard us.

Red Grunt: I think I heard something.

Tucker: I'm sure that was just a coincidence.

Tex arrives inside the temple

Andy: Alright. After she takes out those three one by one, we probably stand a chance.

Tex starts beating on one of the Blue grunts

Blue Grunt: Ow, what the fuck, that hurt! Ow!

Andy: Or maybe not.

Second Blue Grunt: Heugh... So, did you watch the game last night?

Blue Grunt: Now you're shooting me! Give me a break, this sucks! What the fuck did I ever do to you?! COME ONNNN!

Tucker: What the fuck, are they deaf?

A sniper shot hits behind Tucker

Tucker: Oh right, that you heard?

A plasma grenade lands on the Blue grunt at the turret and blows him up.

All the Grunts: Huh?

That First Blue Grunt: What?

Tex: Hiya fellas. Who's next?

All the Grunts: Charge!

They charge, Tex mows them down with two SMGs, proving once again that she's a total badass.

Tucker: That went well. So much for a sneak attack.

Cut to Donut talking on Red Base back in the Gulch

Donut: And that's how I rescued you both, and saved the day. The end. Any questions?

Grif: Donut, that was the longest story I have ever heard. And I don't think I believed a word of it.

Sarge: And quite frankly I found the showtune in the middle to be a little over the top.

Donut: Every word is absolutely true. It was the best military operation that you two ever slept through.

Grif: If everything went so well, then where's our jeep?

Donut: Well, I have a song I'd like to sing about that.

Church: Okay, that red one? That's Sarge. He's their leader, which is lucky for us because... well he's not that good a leader.

Church: And the one next to him is Donut. I like Donut, he's pretty harmless man, I, I don't think he'd hurt a fly.

Church: A little, what?

Church: Uh, I think you might be projecting, there.

Church: I don't know man. You seem pretty defensive for somebody who's not projecting.

Simmons: His armor is pink.

Simmons: It's pink, trust me. I know pink when I see it.

Church: Uh yeah, I bet. You wanna talk about it?

Church: And last is the orange one, that's Grif. He's really lazy, and really annoying.

Church: But, at least he's smart. In fact I think he might be the smartest one of the bunch.

Simmons: You mean smarter than all of the ones there now.

Church: No I mean all of them put together man, there's this other guy, who hangs around, in maroon armor? I haven't seen him in a while but he's a freakin' know-it-all man. He acts like he's smart, but he's really not.

Church: Yeah he walks around like he owns the place, and, you know he- you know, but nobody listens to him, and they always make fun of him behind his back.

Simmons: What do they say?

Church: Oh just how he's not good at stuff, and how he's dumb, and how the stuff he likes is dumb, and also that, you know, he's not as attractive as other people are.

Simmons: (Sniff, then as if holding back tears) Man, he sounds like a real jerk.

Church: Hehey, where ya goin'?

Simmons: I have to use the bathroom.

Church: Well, u-hurry up man, I wanna finish your orientation before you have to make me dinner. 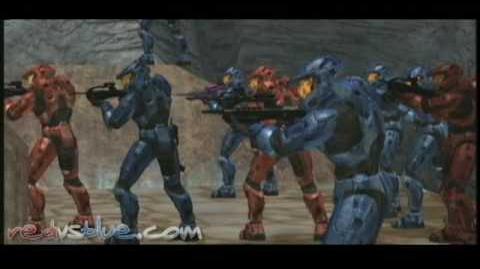 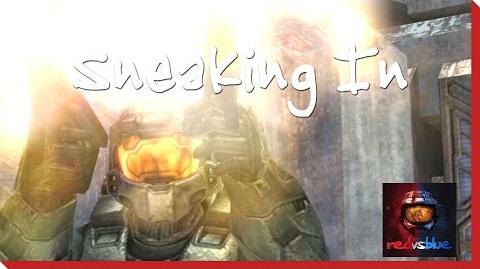 Sneaking In - Episode 70 - Red vs. Blue Season 4
Remasterd
Add a photo to this gallery
Retrieved from "https://rvb.fandom.com/wiki/Sneaking_In?oldid=135656"
Community content is available under CC-BY-SA unless otherwise noted.