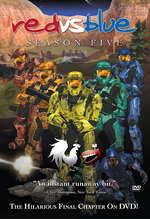 The Red vs. Blue: Season 5 DVD features the entire fifth season of the Blood Gulch Chronicles as well as bonus extras.

Red Vs Blue Season Five is here! Now you can watch the final chapter of the Blood Gulch Chronicles from the comfort of your own TV (or someone else's TV if you're some kind of crazy cat burglar who's broken into their house {btw. the diamonds are in the floor safe behind the piano}). Enjoy the final two hours of the epic saga of those hapless heroes you've grown to love so much (specifically Grif). Look out George Lucas, because this DVD virtually guarantees that RvB will go down in history as the greatest Sci-Fi saga of all time. Stick that in your 'Binks' and smoke it. This DVD is NTSC, region-free, and includes the following:

Retrieved from "https://rvb.fandom.com/wiki/Season_5_DVD?oldid=136025"
Community content is available under CC-BY-SA unless otherwise noted.