SPF 0 is the eighteenth episode of The Blood Gulch Chronicles.

A disappointed Church, together with Tucker and Caboose, stand over Church's dead body atop the cliff. Caboose states that he has an idea, but is ignored by both of them. Caboose continues, asking Church if he can "possess" his own body, just as he did with Sarge previously before. Church responds in a sarcastic manner, saying he would only be living inside a dead body. Church then tells Tucker to bury his body on the first chance he gets, but Tucker tells him not to worry as nothing will happen to it. This annoys Church, telling Tucker that it's an indignity to not bury his body. Tucker states that nothing will happen to it, until Caboose then looks up, exclaiming that he sees birds circling above.

Meanwhile, at Red Base, Grif and Simmons pass the time by playing "I Spy". Grif starts the phrase, but Simmons interrupts, correctly guessing the next object as a rock. Grif is surprised, asking Simmons how he knew, with Simmons telling him that the only thing in the canyon are just "rocks and dirt". Grif agrees, stating that the canyon "sucks".

As the Blues watch Tex fix the tank, Church asks Tucker on how much longer it would take for her to finish her repairs, with Tucker telling him not long. Church then becomes frustrated on his response, prompting Tucker to explain that the Reds dying would be a good thing. Church then explains that if Tex killed all the Reds, she would leave, thus preventing any attempt for Church to retrieve Tex's A.I. from her. Church then tells Tucker that warning the Reds of Tex's impending attack is the only thing he can do to stall her and give him more time. He assures them that he'll try and help them out in any way he could, then proceeds to fade away.

Caboose then uses the sniper rifle to zoom in on Red Base and spots Donut in his pink armor. He excitingly tells Tucker that Red Team has a "girl", causing Tucker to become jealous. Tex intervenes and states that she is a girl as well, but Tucker impudently rephrases to her that they mean an "actual" girl, with Tex promptly asking what that means. Tucker and Caboose quickly retreat out of sight out of fear from her.

Tucker then wonders if Tex heard Church's plan in warning the Red Team, pointing out that she had heard them talking from below a few moments ago. In order to find out, Caboose, through a lack of common sense, inadvertently tells Tex of Church's plan while ironically trying to ask if she had heard them discussing the same said plan from before. Tex listens, then continues to work on the tank without a response. Caboose then ignorantly tells Tucker that Tex might not of heard them. As the episode ends, Caboose wonders if Tex did indeed hear them and if she can "read" minds.

Church, Caboose and Tucker are standing over Church's body.

Church: I am not happy about this.

Tucker: Yeah, we heard you the first time, Caboose, we were just ignoring you.

Caboose: Since you possessed that Red guy, and took control of him, why don't you just possess your own body?

Church: Oh I see, so that way I would be living inside of my own dead body.

Church: Unable to move, just, laying there, rotting in the sun for all eternity.

Church: Okay, Caboose, I'll be sure to get right on that.

Caboose: I think you are a mean ghost.

Tucker: Your body, it stinks.

Church: Tucker, the first chance we get, you are going to bury my body.

Tucker: Quit your bitching, nothing's going to happen to it.

Church: It's a freaking indignity! My body fought hard for this army, and it deserves to be laid to rest.

Tucker: Get over it, you're already dead. What's the worst that could happen now?

Caboose: Hey, Church, look, birds! Why are they flying around in circles?

Cut to Grif and Simmons on the Red Base.

Grif: Okay, I'll go again. I spy something.. that begins with...

Grif: Damn! How did you-

Simmons: Well, because you did rock last time. That's all that's out here, is rock and dirt.

Cut to Tucker and Church watching Tex fix the tank from the cliff's edge. Caboose is behind Tucker looking through the sniper rifle.

Church: How long do you figure until Tex fixes the tank?

Tucker: Not much longer. She said it's going pretty well. The gun's almost working, and then she'll get it moving again.

Tucker: Why would that upset you?

Church: Because as soon as she gets the tank online, she's gonna use it against the Reds, and they're all gonna die.

Tucker: The Reds dying is a good thing.

Church: No, Tucker, it's not a good thing. As soon as we beat the Reds, Tex is outta here. And I still haven't figured out a way to get that A.I. out of her head.

Church: Shut up, Caboose. And if I don't get it out before she leaves...

Tucker: If she leaves you won't ever find her again.

Tucker: So what're you gonna do?

Church: I guess I'm gonna do the only thing that I can do. I have to warn the Reds before she fixes the tank.

Church: Sorry, guys. I don't have much choice.

Caboose: Church, uh, wha-what happens when the Reds out here.. to stop Tex, and then they come also with guns and they find us..?

Church: I'll try to help you as best I can. Good luck, guys.

Caboose: Does this mean I should try to kill Church now?

Tucker: I tell you what: kill me. I promise not to come back.

Caboose: Hey! LOOK AT THIS. (focusing on Donut)

Tucker: Oh man, how come they get a girl?

Tex: (from below them) Uh, you guys realize that I'm a chick, right? And that I'm standin' right here?

Tucker: Yeah, Tex, but when we say a girl, we mean a girl-girl.

Tex: And what the hell does that mean?

Caboose and Tucker: (backing up from the edge of cliff, out of Tex's sight) Nothing!

Tucker: Wait a second. If Tex heard that, do you think she heard Church's secret plan to warn the Reds about her?

Caboose: I don't know... but I think I know how to find out.

Caboose steps back up to the edge, looking down at Tex

Caboose: Hey...! Tex! Uh... Did you hear Church's secret plan to tell the Reds that you were fixing the tank?

Tex turns back to the tank then Caboose backs up to join Tucker.

(Caboose says this in the Earlier Version)

Caboose: I don't think she knows. (fade to black) ...Unless she can read minds... She can't read minds, can she? ...Can you hear what I'm thinking? 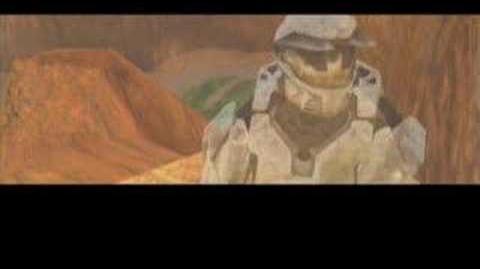 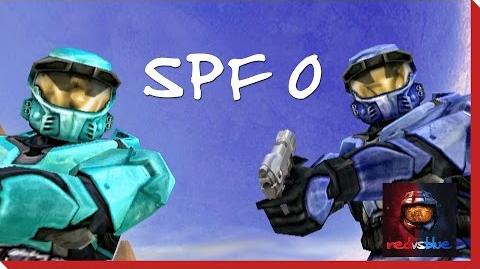