Rounding Error is the first episode of Red vs. Blue: Season 9 and the 174th episode overall.

The episode begins with Epsilon giving another monologue, which is repeatedly interrupted by Tucker's callings. Church goes to the cliff where Caboose and Tucker are waiting to spy on the Reds, who are making modifications to their jeep. As the Blues argue about what the modifications are the Reds fire a rocket from the Warthog at them, where Church hears Donut giving orders. Mad about how everything is so different, Church leaves for Red Base in order to set things straight, saying "If we're gonna do this, it has to be done the right way! Or there's no point in doing it at all."

The scene cuts to many years earlier during Project Freelancer, with the Director and the Counselor standing in front of a leaderboard and arguing over the status of a current mission.

Church: (voice over) Hi, my name is Leonard Church.

Fade into an overhead view of Epsilon's mental image of Blood Gulch.

Church: (voice over) But nobody calls me Leonard. Most people call me Church sometimes they call me Alpha and a few people even know me as the Director, but I haven't been called that in a really, really long time. You see I know that when you look at me, I know I look like a super badass space warrior, but I'm really not. I'm actually a-

Church: (voice over) Uh... (clears throat) Just, uh, ignore him. I'm actually a computer program that's been reincarnated in the memory of-

Tucker continues yelling in the background as Church continues his monologue

Church: (voice over) I'm actually a computer program that's been reincarnated in the memory of the-

Tucker: Where the hell are you?!

Church: (voice over) Okay...I'm just gonna start over. I’m just...I’m gonna go back to the beginning

Church: (voice over) My name is Leonard Church.

Church: (voice over) But nobody calls me-

Tucker appears atop the cliff.

Tucker: Come on! Get up here!

Church: Yeah, okay, hold on. For God's sakes, I'm coming! Shut up! (whispers to himself on the way up) God damn it, I can't even have one fucking moment to myself. Can't even be alone with my thoughts, not even for a second. Somebody's always gotta fucking yell, or scream, or "come look at this," or "what's going on over here," or "hey Church, help me out I don't know what the fuck I'm doing!" Fucking assholes. God I forgot how much this place sucks.

During the moment Church is whispering to himself, the title Red vs. Blue: Season 9 fades upon the screen

Caboose: Now when he gets up here, remember the plan.

Caboose: We only have one shot at this. Don't let it fall apart.

Tucker: Why are you talking to me like this is supposed to make sense? Is this another one of your idiot schemes to make Church your best friend?

Caboose: Ok. Shsh-remember, let me do the talking.

Tucker: Do the talking about what, idiot?

Caboose: Don't worry, I got this.

Tucker: What would I be worried about? I don't even know what your're doing.

Church makes it to the cliff, panting heavily.

Caboose: Okay, abort. The plan did not work.

Tucker: That was it? Okay, now I actually want to know: what was the plan? Because apparently phase one was saying hi. What's next, were you going to wave?

Tucker: Dude are you fucking dying? You sound like my vacuum cleaner when it picks up a penny.

Caboose: Oh God, I know, I- I hate having one of those; i-it's like, it always wants to pee. Like all the time.

Tucker: What the fuck is everyone talking about today? Did I miss a staff meeting? What other body would you have?

Church: Movement? What kind of movement?

Tucker: Remember that new vehicle they got? They've been making modifications to it.

Church: Well that doesn't sound good. How are they modifying it?

Tucker: I don't know, why are you asking me?

Church: Wait- you've been up here watching them all this time, can't you make a guess?

Tucker: Well I don't know man, they sure as hell ain't installing a stereo.

Church: Thanks, Caboose what do you think it is?

Caboose: Yeah, actually I was gonna say stereo, but now it seems like a bad idea to say that, so now I'm going to say... radio.

Caboose: Yeah I know, but I still think I won somehow.

Church: Here, let me see the sniper rifle, I'll check for myself.

Tucker: Do you even know how to use that thing?

Cut to the Red Team working on the Warthog's recent modifications

Sarge gets in the Warthog

Donut: Let's test this bad boy out. Simmons, hop up!

Simmons get's on the turret

Church: Huh. Yeah, looks like they modified their jeep. They changed the turret. What is that, some kind of radar dish?

Tucker: I think it's a rocket launcher.

Church: That's impossible. You can't fire rockets from a jeep, dumbass. There'd be too much torqe or something like that. It's probably some kind of like microwave transmitter.

Tucker: Well, they were loading rockets into it earlier. So unless they were microwaving explosives for a tasty snack, it's probably a rocket launcher.

Church: Hey, didn't you hear what I said about the torqe? It's probably like-

The Reds fire a rocket at the cliff.

Church: Son of a bitch!

Caboose: Yeah... I don't know, I think Church was right, I'm pretty sure I just torqed in my pants.

Another rocket is fired

Tucker: Ah! I hate being right all the time!

Cut back to the Reds

Donut: Let's put the next one right up their ass!

Simmons: Uh, okay, sure, but you don't need to say it like that. I think the weapon is equally as effective, no matter where it hits them.

The screen goes back to the Blues

Church: Was that Donut?

Tucker: I dunno, that's the chick who was working on the jeep.

Church: That's not a girl Tucker. He just wears pink armor. It's a guy.

Tucker: It is? Are you sure?

Tucker: Uh... then I suddenly feel pretty awkward about something I did twenty minutes ago.

Church: What the hell is alone time?

Church: What do you do during alone time, Caboose?

Caboose: Oh, I do the same stuff I do during together time. Only half.

Tucker: Another benefit of alone time: not listening to him for a few minutes.

Cut back to the Reds

Donut: The next one's blowing your armor clean off!

Simmons: Or it will just hurt you a lot! You know some of us realize that's enough. Why do you keep making it weird?

Cut back to the Blues

Church: Dammit. Rocket jeeps? Donut giving orders? This is getting ridiculous. I'm putting a stop to this.

Caboose: Tucker, get down! They're firing again.

Tucker: That wasn't a rocket. That was... something else. Church, where are you going? Church!

Church: To set things straight Tucker. If we're going to do this, it has to be done the right way. Or there's no point in doing it at all. Ok? There's an order to things, Tucker. An order.

"Order" Echos and the screen cuts to black.

PROJECT FREELANCER MCC, MANY YEARS AGO...

The Director is seen looking at holographic Freelancer Leaderboard. The Counselor walks up to him.

Counselor: Our operatives are in position, Director.

Director: Good. Send them in.

Counselor: If I may say sir, my testing indicates that this might not be the best... 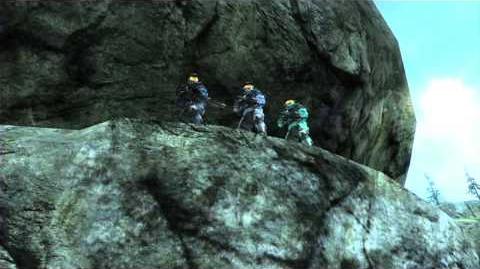 Retrieved from "https://rvb.fandom.com/wiki/Rounding_Error?oldid=137193"
Community content is available under CC-BY-SA unless otherwise noted.