Roomier Than it Looks is the fourteenth episode of the series.

As part of Church's plan to rescue Tex, (as explained in the previous episode) Tucker and Caboose individually go through the teleporter to turn their armor charred-black in order to distract the Reds and fool them into believing that the Blues have more Special Operations soldiers. Tucker goes through, followed by Caboose, as Church waits at the opposite end of the teleporter. Caboose is at first hesitant, asking Tucker if it hurt at all. Tucker tells him not to worry and that it doesn't hurt whatsoever, to which Church asks if it really did hurt. Tucker lies and said that it did immensely. Caboose then arrives through the other end in pain while telling Tucker that he lied to him.

On top of Red Base, Sarge calls over Lopez as he seemingly spots something in the distance. Down below, Grif and Simmons discuss their individual enunciation of the word 'both'. Grif says it as 'bolth', much to the annoyance of Simmons. There are interrupted when Sarge immediately calls up Grif for help when he says that more Special Ops. soldiers are headed towards the base. Grif suggests that both he and Simmons go and assist him, to which Sarge sarcastically disagrees, leaving Simmons alone to guard Tex.

Church, observing through his sniper rifle, does a radio check with Tucker and tells him that the Reds are aware of their presence, indicating to him that his plan is working. Tucker acknowledges and is told by Church to keep moving as part of their distraction. However Caboose, being ignorant to the plan and the overall situation, interrupts Tucker by asking if he could say "hi" to Church. The two begin to bicker, prompting Church to switch off his radio in annoyance. He then proceeds on foot to Red Base.

Back at Red Base, Grif spots Caboose, via the sniper rifle, running across the canyon -only to conspicuously stop in front of a large boulder. Tucker tells him to duck out of view, but Caboose states that if he can't see them, they can't see him. Tucker then tells him that he is still in view. Caboose properly hides while Tucker notes his stupidity. Sarge, however, mistakes Caboose's oblivious actions for tactical brilliance. He is then suddenly "possessed" by Church, who takes full control of his body. Grif is suspicious and asks if Sarge is alright, to which Church replies (through Sarge's voice) that he is fine and proceeds to poorly impersonate Sarge's personality in order to appear "normal".

While behind the boulder, Caboose expresses the fun time he is having with Tucker, and states that they look like real soldiers. Tucker is annoyed, telling Caboose to hide behind another rock. Church, with Sarges body, meets up with Simmons within Red Base. He then knocks Simmons on the back of his head, knocking him to the ground and dazing him. Tex is surprised, but is revealed by Church that he had possessed the Red Teams leader in order to gain access to her. Church also explains why he is a "ghost" and his overall plan to save her. To his surprise, however, Tex responds in a simple "Okay", while also seemingly believing that Church is a ghost as well, stating that it "makes sense". Together, they proceed out of Red Base after knocking Simmons back on the ground again.

Back behind the boulder, Caboose uses the sniper rifle to zoom in on Red Base. Tucker asks him on what he is doing and Caboose explains that he is going to kill one of the Red Team members holding Tex prisoner, thinking Church will come to forgive him from previously killing him, and that the two would be friends as a result. Tucker utters in disbelief asking him if he really does believe that would happen. Caboose happily assures him that it will. Caboose then sees "Sarge" and Tex exiting Red Base and proceeds to aim at Sarges head, unbeknownst to him that Church had possessed his body. As Church prepares for one last distraction so Tex can get away, he is unsuspectingly shot in the head by Caboose, forcibly ejecting Church out of Sarges fallen body. Church, at first confused, is quickly outraged by the action. Caboose is then heard saying "Tucker did it!".

Tucker comes out of the teleporter with black armor on.

Church: Are you okay, Tucker?

Tucker: Yeah, I'm fine. (runs up to the top of a nearby hill) Come on, Caboose!

Caboose: (on top of the base) Does it hurt?!

Church: Does it hurt for real?

Church and Tucker turn towards the teleporter.

Caboose: (emerging from the teleporter in black armor) Owwwchie. (turns to Tucker) You lied to me.

Cut to Sarge on top of Red Base.

Sarge: Ah, dammit. Lopez, c'mere. Do you see something out there?

Lopez looks through a sniper rifle, then turns to Sarge and lowers his head. Camera pans down to Grif and Simmons inside the base.

Simmons: There's no L in it, it's pronounced both.

Grif: You sound like such an ass the way you say it.

Sarge: Grif! Quit your yammering and get your keister up here. Need some help. Got more of them Special Ops fellas headed toward the base.

Sarge: Well, well. Another brilliant idea from the think tank. Why don't you both come up? Leave the prisoner alone. We could just put her on the honor system - have her guard herself.

Sarge: YOU'RE GOD DAMN RIGHT IT IS! Now get your ass up here. We got just enough time for me to spraypaint the bull's-eye on your back... Ah, by bull's-eye I of course mean camouflage. Now move it, cupcake.

Cut to Church looking through a sniper rifle.

Cut to Caboose and Tucker hiding behind a rock, listening over the radio.

Church: Okay, now just keep moving around outside of the base, and draw their attention.

Caboose: (speaking over Church, drowning him out) Tell him, that I.. that I said.. for me to say hi..?

Tucker: Whoa, wait, wait, hey. What? I missed that, Caboose was talking to me. Shut up man, I'm on the radio.

Tucker: (over radio) I'm not yelling, I'm just telling you to let me finish talking to Church. ...No, I'll tell him you said "hi" later. No, you can't talk to him. How could you possibly talk to him on my headset?

Church: (severs the connection) Oh my god. I can't believe I actually died for this war.

Cut to Grif looking through a sniper rifle. Church can be seen running through the background towards Red Base.

Grif: I don't see any- (sees Caboose running across the Gulch) Uh oh. Yep, there's one. (Caboose stops next to a rock and stares at it) ...Why is he just standing there?

Cut to Tucker crouching behind another rock.

Tucker:Caboose, get behind the rock. They can still see you.

Tucker: That's because you're facing the rock.

Caboose: (looks at the base) Oh. Right. (ducks behind the rock)

Cut to Sarge on Red Base.

Grif: Sir, are you okay?

Church as Sarge: Uh, who you talking to, Red? Me?

Grif: (sarcastically) No. I'm talking to Lopez. Because, you know, that's real rewarding.

Lopez takes a swing at Grif who steps back.

Grif: Hey, what'd I tell you about that?

Church: Oh, uh I-I'm fine, that's... I'm just so mad about, these uh, god damn Blues out here. They got me so god damn mad, I could spit! (horks one up and spits on his visor)

Grif: ...Um, sir? Did you just spit inside your own helmet?

Cut to Caboose crouching down.

Tucker: Would you please go hide behind another rock?

Cut to Church as Sarge running down to where Tex and Simmons are.

Church: What's, uh.. why nothin'. Why would you ask if somethin's wrong?

Simmons: I think that's a perfectly normal question in a time of war.

Church: Yeah, well, I don't know. You're starting to act kinda suspicious there ..other Red guy. So I'ma keep my eye on you.

Simmons: (turning around to face Tex) Sarge, I'm starting to think that-

Church hits Simmons on the back of the head, knocking him down.

Simmons: Ow, geez, the back of my head!

Tex: What the hell are you doing!?

Church: Tex! It's me, Church! I've come to rescue you.

Tex: You're kind of short to be Church.

Sarge: Hurk! What in Sam Hell? Where the- Who spit on my visor?

Church: Tex, there's not much time to explain, so I'm just gonna give you the summary here, okay? I'm a spirit now, and I'm trapped in the physical world. I possessed this Red guy so that I could sneak in to the base and rescue you while the rest of our guys run around out in the middle of the canyon dressed in black armor that they got from going through the teleporter.

Church: What? That's it? Okay? You're not surprised by any of this?

Tex: No. It pretty much all makes sense.

Church: Not even the whole "Church is a ghost" thing? That didn't do anything for ya?

Tex: I can see right through you, it's pretty obvious...

Church: Okay, well, let me hop back in this guy, and we'll get outta here.

Sarge: (as Church re-enters him) Huuurk!

Cut to Caboose looking through the sniper rifle, with Tucker near him.

Caboose: One of the Reds has Tex. I'm going to shoot him, and kill him, and free Tex. Then Church will forgive me for killing him, and we will be friends.

Tucker: Oh, come on. You don't actually believe any of that, do you?

Cut to Church as Sarge, and Tex, outside the Red Base.

Church: Alright, I'll make one more distraction, then you run up to the teleporter and escape. Ready? One... Two... Three!

Caboose shoots Sarge in the head, and his body falls down.

Church: What the? Where did my body go? Oh, you've gotta be KIDDING me!

Caboose: Tucker did it! 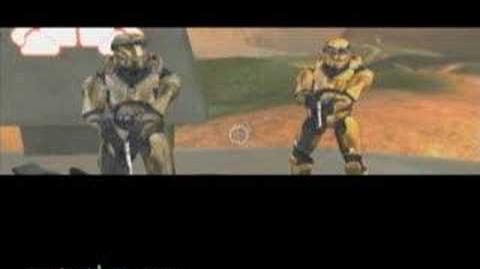 Roomier Than it Looks
Original 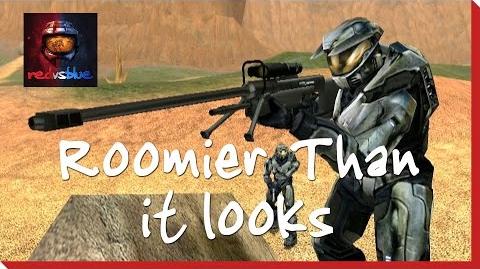 Roomier Than it Looks - Episode 14 - Red vs. Blue Season 1
Remastered
Add a photo to this gallery
Retrieved from "https://rvb.fandom.com/wiki/Roomier_Than_it_Looks?oldid=138837"
Community content is available under CC-BY-SA unless otherwise noted.