Church, Grif, and Simmons have infiltrated a Covenant base to search for the imprisoned Tex and Sarge who are both kept at highest section of the building while the 3 invading Simulation Troopers are at the lowest. When Grif (in his typical fashion) tries to convince the others to give up, Church and Simmons instead opt to plan a way to rescue their friends leaving a frustrated Grif to inadvertently alert a hoard of Grunts to their presence. The 3 solders take cover and return fire with Church deciding to use the strategy of using a guided rocket controlled by Simmons to take him to where Tex and Sarge are held. While Grif and Simmons try to hold their position against the Grunts, Church is taken for a wild ride while tethered to the rocket. Eventually the pint-sized aliens overpower the two Reds. This causes the rocket Church is tied with to go out of control and explode when it slams into the top of the building with the Blue caught in the explosion.

The screen fades to white to reveal that this has all been taking place inside the Epsilon Unit, and was the culmination of an Epsilon iteration's attempt to keep Tex in Blood Gulch by antagonizing the aliens. After arguing with another iteration of himself, Epsilon-Church decides to try again, and because it would make him feel better, to kill Caboose this time around.

The new Epsilon is transported into the simulation of Blood Gulch, while the camera pans out to reveal the Epsilon unit sitting in the storage facility.

Open on the exterior of a large blue-grey structure on a snowy planet. Fade to a ventilation shaft where Grif and Simmons can be heard arguing...

Epsilon (off-screen): How would you know? You've never even been here before.

Grif (off-screen): You've never been here before, either.

Epsilon (off-screen): Well, I'm not the one telling people they're going the wrong way.

Epsilon (off-screen): You shut up.

Grif (off-screen): Let's all shut up. How about that?

We then see Epsilon, Simmons and Grif in all their animated glory. Simmons is seen holding a Windows tablet.

Epsilon: Simmons, what does that thing say? Where are they holding Sarge and Tex prisoner?

Simmons' device shows a long illuminated hallway, with sergeant and cowboy hat icons next to the 'prison'.

Epsilon: What section are we in now?

The tablet pans out to show multiple rooms around their area.

Grif: Aw, crap. That's like a million sections away!

Epsilon: We have to fight our way through this whole place? They'll be dead by then!

Simmons: Maybe not. You see this?

Simmons points, and the camera spins quickly to show a holographic, circular tunnel.

Simmons: It says that access tunnel cuts right into the mountain. It looks like a pretty straight run... but it's loaded with guards.

Epsilon: How long is it?

Epsilon takes the tablet from Simmons as he looks at Grif, and Church begins typing on it.

Simmons: Grif, we can't stop now! We're only in the first room!

Grif: No, according to what you said, we're not even in the first room! We're in room zero. But it's okay, Simmons, we did our best. No one could possibly ask any more of us.

Epsilon: I got an idea. Simmons...

Epsilon and Simmons can be heard secretly whispering a plan to each other while Grif watches suspiciously.

Grif: Hey, what are you guys talking about? That doesn't sound like surrendering. Let me see.

Grif approaches them, but Simmons raises a hand quickly to stop him.

Grif starts to walk over to a door, with a holographic lock.

Grif: 'Oh look at me, I'm Simmons! I have a computer and I don't have to show it to anybody! I just got to push all the buttons!'

While saying this, Grif randomly starts pushing buttons on the lock, and the door opens, revealing a room filled with Grunts, who look up at him.

Epsilon (off-screen, faintly): What is that noise?

Grif: How do I shut this door?

The Grunts pick up their weapons. The scene cuts to Simmons, Grif and Epsilon running down the hall, and getting behind cover.

Simmons: Where the fuck did they come from!?

The three of them start firing at the Grunts.

Epsilon: WHAT THE HELL!

Simmons: They're blocking our way to the access tunnel!

Simmons pulls out the Rocket Launcher. Cuts to Grif looking at his gun.

Grif: You're not gonna kill them all with that!

Cuts to Epsilon placing a rope in the Rocket Launcher's barrel.

Epsilon: We don't need to! This is a guided rocket!

The camera pans out to reveal Grif and Epsilon firing at the Grunts.

Epsilon: Aim for the tunnel, Simmons!

Simmons steps out from his cover, with the Rocket Launcher.

Simmons: Fire in the hole!

Simmons fires the rocket. It flies past the Grunts and into the tunnel. We see the pile of rope beginning to get shorter and shorter as it travels through the tunnel.

Epsilon: Alright. Use the map to guide me. Don't let me hit anything!

We can see Epsilon now tied the rope around his waist.

Epsilon: And, you know, explode.

Grif: What the hell are you doing?!

Grif: You had a first thought?

Epsilon: Yeah. Hey Grif? In case I forget to say it later: ow.

Epsilon is pulled viciously away toward the access tunnel, hitting a Grunt on the way, whilst screaming.

Grif: Ha, ha, ha! Yes! Finally a stupid plan where someone's gonna get killed and it's not me!

Cut to the access tunnel, where we see the rocket fly past, and Epsilon close behind, still screaming. Cut back to Simmons and Grif, where a Grunt is seen almost running out of ammo for his pistol.

Grif: Oh my God, there's like a million of these things!

Simmons: Well, fuckin' shoot them, then!

A Jackal is seen standing guard outside of the exit of the entrance tunnel. The rocket flies past it, with the Jackal slowly looking at the rope. Epsilon exits and smashes the Jackal into the ground.

Cut back to Simmons, who is seen guiding the rocket by using the launcher, whilst Epsilon yells at them over the comms.

Epsilon: Hey, what are you guys doing back there!? Just guide the rocket! Stop goofing around!

The Grunts finally run out of ammo, and drop the guns, running towards Simmons and Grif.

Simmons: Shut up, I need to concentrate!

A Grunt launches himself at Grif, pummeling him to the ground.

Simmons: Help yourself, they aren't that tough!

A Grunt punches Simmons right in the groin, and knocks his tablet away.

Simmons: Ow! Son of a bitch!

Epsilon: Whatever you're doing back there, stop doing it! Or do it straighter! Please!

Simmons is trying to knock the Grunts away with his Rocket Launcher.

Simmons: Take that, you little bastards!

Brute: What is that?

Cut briefly back to Grif, with a Grunt jumping up and down on him.

Epsilon is seen looking up at the top of the building, where he'll blast through.

Cut back to the outside of the base, right as Epsilon blasts through the top.

Old Epsilon: Hey, up yours, man! You don't know me!

New Epsilon: Actually, dumbass, I do. I'm you.

Old Epsilon: I know you know! It's a figure of speech! Huh, who's the dumbass now!?

The old Epsilon looks down, then punches the New Epsilon, which hurts both of them, and they stagger back, holding their jaw.

New Epsilon: Or we just have a glass jaw.

They both stand up straight and face each other.

New Epsilon: So, what did we learn this time?

Old Epsilon: [SIGHS] Antagonizing the aliens is not a surefire way to keep Tex in Blood Gulch.

New Epsilon: Yeah, you know, I really thought you would have figured that out the first time it didn't work.

Old Epsilon: Don't you mean we?

Old Epsilon groans loudly and falls backwards on the ground.

Old Epsilon: Okay, I get it!

New Epsilon: [SIGHS] I guess it's time for a new iteration. Any bright ideas this time around?

Old Epsilon: What if we killed Caboose?

New Epsilon: How would that help?

Old Epsilon: It would make me feel a lot better.

Suddenly, Old Epsilon disappears as New Epsilon creates Blood Gulch around him and stands atop Blue Base. He spawns a Sniper Rifle in the air and grabs it as it drops down.

Epsilon: Alright. Let's get this started.

The camera starts to pan out and away from Church.

Epsilon: Hey Tucker! I think the Reds just got a delivery!

The camera fades out to show us the Epsilon unit among other devices and a blue helmet on shelves.

Fade to a starry space.

A small object starts zooming in as music plays. Vic: And it's got all sorts of stuff in it too! I'm talking about aliens, humans, canyons, spaceships... Those little peppers wrapped in bacon, stuffed with cheese... Uhhh! Hits the spot every time! Muy delicioso dude!Yep! There's a lots of stuff in space amigo. But there's even more stories. And I heard them all. My name is VIC... 555- V-I-C-K. And I can open the window to a whole galaxy full of stories you never even knew existed.

The still approaching object is revealed to be a window.

Vic: See what I did there? That's a Segue. We´re talking about windows? Window shows up. Creates intrigue. Wow We´re almost to the good part... Some stories are funny, some stories are not. Some of them look kind of weird, and some of them might be about folks You never even heard of. The whole Red vs Blue-niverse is about ready to burst open compadre! Come with me and let me be Your guide...

The window starts opening, a glow coming from the other side... but then a Pelican flies through and smashes it. The music stops.

Agent Carolina: What the hell was that!

Agent North: I think it was a window?

Agent York: A window? Just on its own? I mean, not attached to anything?

479er: What the hell is a window doing in the middle of space?!

Some ships in pursuit of the Freelancers fly by, shooting.

Triumphant music plays while showing clips from the upcoming episodes: Halo 1 Red troopers training! A Halo 3 Red soldier in the desert! Caboose in a crude drawing of "Blood Valley"! A cel-shaded city full of neon! Live-action troopers in front of an explosion! A base exploding, followed by Grif and Simmons reacting! A cel-shaded man is pulled inside a room! Halo 3 soldiers in black and white! Halo 2 Simmons points a rocket launcher at the viewer! Epsilon-Church is ambushed by Sarge! Wash and CT point their guns! Mega Blok versions of Grif and Simmons!

The logo for Red vs. Blue: Season 14 stands in space before another Pelican hits the 4 and makes it tip, with a loud crashing noise.

Sarge: What the heck was that?!

Caboose: I think it was a logo. 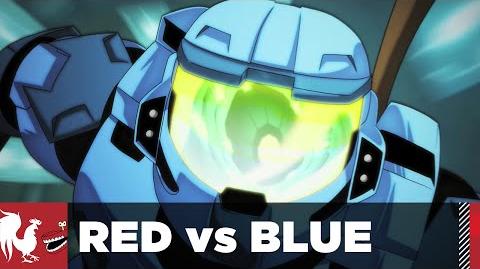 Retrieved from "https://rvb.fandom.com/wiki/Room_Zero?oldid=146744"
Community content is available under CC-BY-SA unless otherwise noted.