Right to Remain Silenced is the seventeenth episode of the fourth season and the seventy-fourth of The Blood Gulch Chronicles.

Simmons manages to enter Red Base by correctly guessing the weak password established by Grif and Donut. Simmons wants to report the Blues' plans, but Sarge still considers him a traitor and insists on holding a trial with himself as both judge and prosecutor. This trial is quickly aborted, however, when Grif argues that Donut will want to act as a bailiff in hotpants. As a result, Simmons's sentence is summarily commuted to the payment of a hefty fine, to be split between Sarge and Grif.

Meanwhile, O'Malley, Doc and Lopez return to the gulch. As O'Malley approaches Blue Base, he is greeted with a "warning shot" from Church, who reveals to Caboose that he was actually trying to hit O'Malley. O'Malley accuses the Blues of attempting an ambush, but Church explains that he just wants to establish a few ground rules at the outset: O'Malley is supposed to enter the base, give a diagnosis for Tucker, and then leave. In exchange, O'Malley demands something "mysterious," "frightening," and "pure evil," as well as a 20-dollar upfront co-payment. Church agrees and asks Caboose for 30 dollars.

Fade in to Red Base

Simmons: Sarge, finally, I need to tell you what the Blues are planning.

Sarge: I thought I told you idiots not to let this traitorous scumbag in the base!

Simmons: Good to see you too, sir.

Grif: We didn't let him in the base.

Grif: Well obviously he penetrated the defensive protocol that me and Private Donut established.

Simmons: Defense protocol? You asked me what the password was.

Grif: And you knew it.

Grif: It's so obvious, it's impossible to guess!

Simmons: A password should contain at least one number, and one letter. For example, your password would be "2dumb2live".

Sarge: Grif's stupidity aside, I'm not speaking with you until we punish your insubordination and treason.

Simmons: How about I just trade you the information that I learned from the Blues?

Sarge: No! We have to have a trial. Right here, right now.

Simmons: What? We don't even have a judge.

Sarge: Inaffirmative. In my civilian life, I worked as a judge for many years.

Sarge: Livestock. And occasionally agriculture. Now let's find out if Simmons is guilty of treason or best in breed.

Simmons: I don't recognize the authority of this court.

Simmons: But aren't I innocent until you prove me guilty?

Sarge: Nonsense! Why would we waste time having trials for innocent people? That would be a waste of resources.

Simmons: But I'm not guilty until you hold trial and convict me.

Sarge: So you admit it's a foregone conclusion!

Grif: Okay, this is officially more boring than any of the other times I've been to court. Permission to sigh and walk away sir?

Sarge: Permission denied. If you leave, Simmons won't have anybody to defend him!

Simmons: Whowowowhoa wait a second, I prefer to defend myself.

Sarge: I knew you'd say that, and as the old saying goes, a person who chooses to defend himself, has a fool for a lawyer. And that fool is Grif.

Grif: Who's the prosecution?

Sarge: Why I am of course.

Simmons: You're the judge and the prosecutor? That's a conflict of interest.

Sarge: I object to that as speculative. And I also sustain my own objection.

Grif: Look it's only a matter of time before Donut finds out we're having this trial.

Grif: Well, if you're the judge and the DA, and I'm the defense, you know Donut's gonna wanna be the bailiff, and that means he's gonna wanna wear the cop uniform with the short shorts.

Grif: Exactly. And I think we can all remember that dance routine from Sarge's birthday party.

Simmons: Oh my God, that cake is huge! It's big enough to fit a person in it.

Grif: Why does the cake smell like baby oil? Oh God, where's Donut?!

Cut back to the present

Grif: With time off for good behaviour.

Grif: I also think he should pay a hefty fine, which we can split.

Simmons: But I didn't do anything.

Grif: You just keep your mouth shut. And don't talk to the press.

Donut: Hey, what's goin' on in there?

Sarge, Grif, and Simmons: Nothing!

Cut and pan down to O'Malley

O'Malley: Huhahahahahaah, now be careful. Don't give away our position with maniacal laughing. We don't know what to expect from these fools. This could all be an elaborate trap! And we don't want to be caught off-guard.

Doc: You mean get caught in a trap before we have a chance to spring our trap.

O'Malley: Precisely you fool, now shut up. At least we have a lookout. Lopez! What do you see up there?

O'Malley: I haven't been here in some time, which one is the Blue Base?

O'Malley: Oh, yes. They're really thinking outside the box with the design. Hmm, it's quiet, too quiet.

O'Malley: Now suddenly it's too loud. I preferred it when it was quiet.

Church: Alright hold it right there!

Lopez: Veo a alguien. Creo que tiene un arma. [I see someone now. I think he has a gun.]

O'Malley: Yes I see that, thank you for keeping us informed, you moron.

Church: Yeah that was just a warning shot O'Malley. You make any funny moves, the next one's gonna go right in the middle of your visor.

Caboose: You think you can make that shot from here?

Church: Uh, probably not, I was actually trying to hit him that time. I swear to God I think somebody fucks with the sights on this thing when I'm not lookin'.

O'Malley: I knew it! This was just some elaborate scheme to lure us in to an ambush!

Church: First of all, I don't know if calling you on the phone and inviting you over- I don't know if that qualifies as an elaborate scheme. And secondly, we're not ambushing you. We just wanna lay down some ground rules for your visit.

O'Malley: I'm not very big on rules, you know.

Doc: It's true! We had this system back at the evil lair where we each clean on different days, but I always end up doing it!

Doc: And he always leaves the milk out!

O'Malley: You fool! Be quiet.

Doc: And don't even get me started on the phone bill.

Church: Hey Doc, I see you're still swimmin' around in that head somewhere too.

Doc: Well it's not the ideal situation, but any relationship requires work if you-

O'Malley: You fool! This isn't a relationship, I'm just using your body to fulfill my evil plans. When we're done, I'm going to throw your rotting carcass into a swamp, and let the beasts feed on your entrails, huhuhuhuhahahahaa.

Doc: I love you too buddy.

Church: Well, don't get any bright ideas about jumping in to anyone else today, O'Malley. We've all got our radios off, and we've all got our minds cleared. We're not thinking about anything. For some of us that was easier than others.

O'Malley: Hmm, and what do we get?

Church: Whaddaya want. And I should warn you, Tex is not here. So if you have any cute ideas for her, don't bother.

Doc: Well a standard physical usually requires a twenty dollar co-pay. Hey, ask him what kind of health insurance plan they have.

O'Malley: You fool, let me negotiate. We want something from you, but we're not going to tell you what it is, until we need it! Huhuhuhuahahahaha.

Church: No way, I'm not agreeing to something without knowing what it is!

O'Malley: Hah, huhaha you fool, and we want the twenty dollars up front!

O'Malley: Ah you moron! If you'd used a credit card you could have gotten airline miles! Or at least a thirty-day grace period with no interest. You fiscally irresponsible fools! 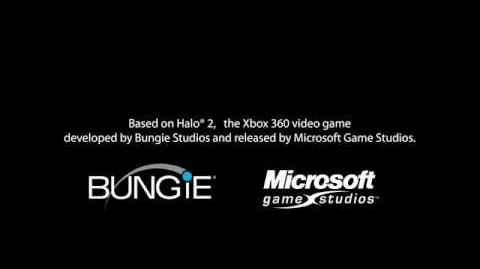 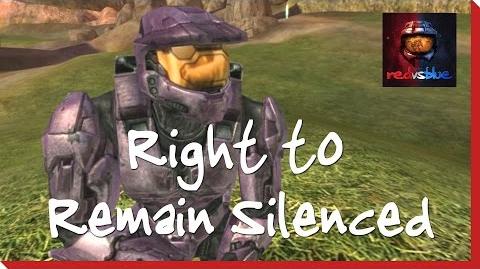 Right to Remain Silenced - Episode 74 - Red vs. Blue Season 4
Remastered
Add a photo to this gallery
Retrieved from "https://rvb.fandom.com/wiki/Right_to_Remain_Silenced?oldid=135660"
Community content is available under CC-BY-SA unless otherwise noted.