Restraining Orders is the eleventh chapter of Red vs. Blue: Revelation and the 164th episode overall. The episode aired on June 28, 2010.

The episode opens with Tex beating up Epsilon with his old monitor body while Sarge and Simmons watch with Grif as he holds a med-pack at his groin from the intense groin beating Tex gave him. As Caboose asks F.I.L.S.S. if she can stop Tex, she reveals that she can lock Tex's armor, but Caboose accidentally locks down everyone else's armor too, except for his because his Mark V helmet doesn't have the necessary protocol that activates the Armor lockdown.

Fade in to Tex beating Church with his old round body

Sarge: Naw buddy I think you got everything under control. We'll just hang back here.

Grif: Yeah, you've got some catching up to do.

Sarge: Hey, what's she beating him with?

Simmons: I think that was his old body.

Sarge: You mean he ain't a floatin' cue ball any more?

Sarge: That's too bad. Had a few more nicknames in my side pocket. We'll certainly miss you Lord Hackensack of the Roundalots.

Grif: Beating him with his own body? That doesn't seem physically possible.

Caboose: Uh-hu- we have to do something.

F.I.L.S.S: I am sorry, as I said, I cannot operate outside the bounds of my standard safety protocols.

Caboose: What if I said... pretty please.

F.I.L.S.S: Private Caboose, is there a reason why you don't want to use one of the standard safety protocols? In this scenario, I would strongly recommend locking down the armor of any rogue unit.

Caboose: Wait you can do that?

F.I.L.S.S: Of course. Armor lock is a standard safety feature since the Freelancer break in.

Caboose: Well why didn't you tell us that?

F.I.L.S.S: Why would I need to tell the Director that? He wrote the protocol himself.

Caboose: Oh, right. Yes of course he did. Um Sheila, could you do the armor lunchable thing that you said?

Church: What- what's happening? Caboose what did you do to her?

Caboose: Yes! Yes! I did it! I am the biggest hero ever! I beat up the girl!

Sarge: Hah hah, yes! See, that's how you do it Grif; face your enemy man to man. Or in your case, woefully inadequate man to woman. And then when she's distracted, use superior technology to take her out. *sniff* Reminds me of prom night.

Grif: We didn't do anything, she shut down.

Caboose: I am the best!

Simmons: Uh, hey guys? What do you think that voice meant by "all units"?

Caboose: I did it, I- not my fault! Not my fault! I did not do this! The computer made suggestions! And the default option was yes!

Grif: Well this is just great.

Caboose: Uh, Sheila, is, is my armor gonna lockdown too?

F.I.L.S.S: No Caboose, your helmet does not have that particular protocol installed in it. I had assumed, that was the reason why you were wearing that-

Caboose: Yes. That is totally the reason.

Cut to the desert, where Wash is overlooking a bunch of dead aliens.

Washington: Well, so much for the "leave one of them alive" strategy. Doc, where are you?

Washington: Still alive. I thought maybe you'd been killed in the battle.

Washington: I didn't say I was worried. Get down here, see if any of these things are still breathing.

Washington: You're a medic, get- medical.

Washington: I want you to see if they're alive, I don't want you to check their cholesterol levels, just get down here.

Washington: Meta, you search the camp. See if you can find anything useful for us. Any clues where Epsilon went.

Washington: Tell me about it.

Doc: Maybe we should take a break.

Washington: Excuse me? A break?

Doc: Yeah, like a three-day leave! Everyone go off, recharge their mental batteries, come back refreshed, and like, ready to tackle our challenges.

Washington: You want a vacation?

Doc: I call it a Soul Sabbatical.

Doc: What, Freelancers don't get overtime?

Washington: That's right, we have a job to do and we're expected to stick wit- wait. Why, wh- do you?

Doc: You guys don't get that? That's crazy, you work so hard.

Washington: Tell me about it.

Doc: You guys should strike.

Doc: What was that?

Washington: Quiet. What did you find, Meta?

A grenade has its pin pulled and is thrown at the cave entrance, where Wash has moved to

Washington: Doc, get in there and see what he found.

Doc: Which Doc, there's a, is there another Doc here? I know you're not talking to me. Yeah, you know, probably better if you go in? Historically, I don't really have the best success rate going in caves. They tend not to work out for me. Before your time, but trust me. I-uhy- you don't want any part o' that. 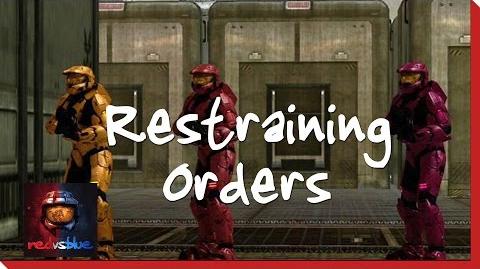 Retrieved from "https://rvb.fandom.com/wiki/Restraining_Orders?oldid=146718"
Community content is available under CC-BY-SA unless otherwise noted.