Remember Me How I Was is the seventeenth episode of Red vs. Blue: Season 10 and the 219th episode overall. It aired on October 1, 2012.

At Valhalla, Grif and Simmons debate on their motive for hunting the Director. Simmons points out that the Director actually is the reason they are there, as he inadvertently caused many of the problems they've faced over the years. Grif points out that, unlike the Freelancers, they themselves have no personal vendetta against the Director. Sarge then joins the two and grimly adds that even if they succeed in killing the Director, it would lead to no avail and leaving Valhalla will simply make things worse. Unbeknownst to the Reds, Washington has been inconspicuously eavesdropping on their entire conversation and leaves to ponder this.

Meanwhile, Epsilon questions Carolina about her grudge against Tex, as the latter once considered her a friend. Carolina bitterly responds by stating that she hated Tex because she couldn't compete with her, and believes that if Tex couldn't find the Director, how could she herself do so. Epsilon tells Carolina, in reply, to let it go and that if Tex was the best, she would be standing in Carolina's shoes. Carolina then pulls out Tex's dog tag and discovers that it actually belongs to Agent Connecticut. Epsilon then notices that the dog tag has some data stored in it and searches inside on Carolina's request.

On the Mother of Invention, inside a Freelancer classroom, Tex investigates the dog tag she found earlier in her locker and discovers a message from C.T. stored on it, that is directed to her. On the message, C.T. states that she has left behind a copy of the data she took about the Director's misdeeds for Tex; not because she is the best soldier, but because she considers Tex the most trustworthy.

As Tex further investigates the data, she finds details on all of the A.I. programs and becomes incensed upon discovering that she, herself, is the A.I. program Beta. Meanwhile, Washington undergoes surgery for implantation and just as Epsilon is implanted inside him, memories of Allison begin to rapidly trigger throughout his vision, sending Wash into a state of severe pain, causing him to panic. He is eventually sedated and sent to Recovery.

Back in Valhalla, Epsilon reappears in front of Carolina and tells her that he now remembers everything.

Fade in to Valhalla, where Simmons and Grif are seen standing at Red base.

Grif: You ever wonder why we're here?

Grif: No. I mean why are we going through all this trouble just to find one guy?

Grif: Yeah. But so what? I don't have a problem with him.

Simmons: Yeah, but he's the one that started all of this. You know. He's the reason we have to deal with the Freelancers, the A.I.s, and the Meta. I mean when you think about it, he's the reason why we're here.

Sarge emerges from inside the base and approaches the two.

Sarge: Yep. He's a real dirtbag all right. But...even if he's six feet under, we'll still be in the same damn spot.

Sarge: All I'm saying is we made it back to base in one piece, and even found the rest of our team. So do you boys really think running off again will make things any better?

Cut to Washington eavesdropping on the Reds from the side of the base.

Sarge: 'Cause the way I see it, leaving this place is only going to make things worse.

Grif: Hmm. I guess you have a point Sarge.

Cut to another area of Valhalla, where Carolina is seen walking.

Epsilon: No, it can't. Carolina, the guys are terrified of you.

Epsilon: My point is that they think you're a killer psychopath and you can't be trusted! But I know they're wrong. I know why you're doing all this. And I know you're not really crazy!

Carolina: (sarcastically) Gee, thanks Church. You certainly know how to make a girl feel special.

Epsilon: What I don't know is what happened between you and Tex.

Carolina: I don't want to-

Epsilon: You mentioned her name back on the island.

Carolina: What does Tex have to do with anything?

Epsilon: Well, a lot apparently! Because every time I bring her up you act like you're going to put your fist through something. And then, you do sometimes.

Epsilon: Look, I understand you're angry. I'm angry too. The Director's a fucking dickhead and we're going to make him pay! But Tex was your friend, right?

Carolina: (laughs) My friend?! Who the hell gave you that idea?

Epsilon: Look, she was a total bitch. Trust me, I know. But she told me once she would have given anything to save you. I don't know what she meant exactly, but, if you really want to take down the Director, you gotta pull yourself together, you know. You gotta let it go.

Carolina: But even she couldn't find the Director! Agent Texas; the best of the best. How the hell am I supposed to do what she couldn't?!

Epsilon: Carolina, if she was really the best, then she would be standing here right now, not you. Let it go.

Carolina looks downward and pulls out something.

Epsilon: What is that?

Carolina opens her hand and reveals a dogtag.

Carolina: They're her dog tags... Wash found them in the crash.

Carolina cleans off some dirt from the tag with her thumb, revealing Connecticut's name. A USB then quickly pops out from the top.

Epsilon: It looks like some kind of data unit.

Carolina: Can you tell me what's on it?

Epsilon: Only one way to find out. And hey, if I'm not out... in like three months, don't bother coming in looking for me. Just... move on with your lives.

Epsilon disappears. Scene flashes to the past, where Tex is seen walking into the Freelancer classroom, holding the dog tag she found in her locker.

FREELANCER CLASSROOM: MANY YEARS AGO...

Tex walks up to one of the desk's and plugs in the data unit on the dog tag. A prerecorded message from C.T. appears on the screen.

C.T.: Agent Texas.... Allison. If you're reading this, then that means I escaped. Or, well at the very least, I'm probably not around anymore.

Cut to Washington's point of view, where he is seen lying on an operating table as his implantation of Epsilon is prepared. The Counselor and the Director can be seen standing by his side, along with equipment and several doctors.

C.T.: I wanted to leave behind all the data I've been collecting about Project Freelancer. I never could shake the feeling that something was wrong the program; the secrets, the lies, the manipulation. Smoke. All of it. Obscuring a big damn fire. I did some digging, and now I know what the Director has been hiding. What he did.

Cut to Washington in operating room.

C.T.: He broke the law, Allison. The one law they don't just slap you on the wrist for. I'm taking the originals with me as an insurance policy. I leave this copy for you not because you are the best solider in the squad, but because I know that I can trust you the most. After reading these files you will understand why. Good luck. Your friend, Connie.

The message ends and new files appear on the screen containing all the data that C.T. collected: "AI Experimentation"; "Mission Logs"; "Personnel Files"; "Financials"; and "Video Surveillance". Tex opens the "AI Experimentation" file. A description of the Alpha AI appears on screen first. She scrolls to the next AI, Beta, but the file is password protected. Cut to Washington in the operating room. Cut back to Tex, who continues scrolling through the rest of the AI files along with the emotions each AI stems from: Omega (Rage/Anger), Gamma (Deceit), Delta (Logic), Theta (Trust), and Sigma (Ambition/Creativity). She then begins to scroll through a range of other available emotions. Cut back to Washington as Epsilon is fully implanted, causing memories of the real Allison, who is wearing a marine uniform, to flash before the latter's eyes.

Allison: (from memory flash) Stop it. Put that thing down.

Cut to Tex searching through A.I. files. Cut back to Washington in the operating room, continuing to receive memory flashses.

Allison: (from memory flash) Leonard, come on, stop it.

Director: Secure him! Get him under control!

Cut to Tex attempting to figure out the file's password. Cut back to the operating room.

Allison: (from memory flash) You're going to make me late.

Cut back to the classroom, where Tex correctly enters the word "ALLISON" in the password box, resulting in the log of the Beta A.I. and various images of Allison to appear on screen. Cut to the operating room, where Washington continues screaming.

Allison: (from memory flash) I have to go.

Cut back to the classroom, where Tex reads over the Beta A.I. profile. She then examines an image of Allison. Cut to the operating room.

Scene flashes back to the classroom, where Tex calmly moves her hand across an image of Allison.

Allison: (voice over) I hate goodbyes...

Director: Get him to recovery!

Director: Counselor, I'd like to speak with as soon as he wakes up.

Counselor: Of course, sir. What was that he said about "goodbyes"? Director?

Fade back into the classroom, where Tex raises her fist and clenches it.

Scene flashes back to present day, in Valhalla.

Epsilon: I know where to find the Director.

Epsilon vanishes briefly, then reappears in his full form. 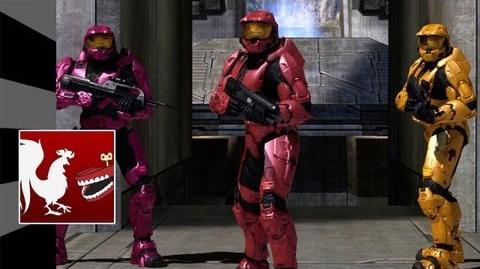 Retrieved from "https://rvb.fandom.com/wiki/Remember_Me_How_I_Was?oldid=139179"
Community content is available under CC-BY-SA unless otherwise noted.