Tucker tries to give Junior the talk, and asks Church to help. Church ends up getting caught up in the complications of his own relationship with Tex. Sarge, who was doing reconnaissance, overhears the conversation. He reveals in his experience military tactics translate well into the bedroom. He starts going into detail about some of his exploits, prompting the Blues to leave in disgust, Tucker deciding teaching Junior via the internet is a better idea.

From Junior's point of view, we see Tucker marching up to him in the middle of Blood Gulch, lecturing him. Behind a nearby rock we can see the legs of Sarge, fast asleep.

Tucker: Listen, Jr. we need to have a little talk. There comes a time in every young... thing's life when you start to feel sudden urges.

As Tucker tries to explain, Church and Caboose emerge from the nearby teleporter and walk up to Tucker and Junior.

Caboose: Oh. It is Church, what are you doing here?

Tucker: It's cool, Caboose, you can drop the act.

Caboose: Yeah, I caught him blarg-ing his own honk.

Church: Kill it with fire.

Tucker: What? No way! He can't die a virgin! That's Simmons' job!

Church: Combine that with the species need to parasitically infect the host, and it means all of us are pretty soon going to be carrying mutant alien babies. Thanks, Tucker.

Tucker: Seriously, Church, you don't have anything you can add? I know you can help! You traveled back from the afterlife just to be with your girl, even after she rejected you! That's admirable.

Sarge gets up and heads over to listen in.

Tucker: Wow. You're really, really bad at this.

Sarge: I couldn't help but notice that you all find yourselves in a bit of coital conundrum.

Church: Sarge? What're you doing behind the rock?

Sarge: Reconnaissance, dummy. I was gauging the strength of the Blue Base fortifications and seemed to have...dozed off for a few moments. What day is it?

Tucker: Hey, Sarge, what do you know about love?

Sarge: I happen to know that many military techniques translate straight to the bedroom! Like close-quarters combat, and the pincer maneuver.

The Blues react in horror.

Church heads back to the teleporter.

Sarge: I still remember one of the best nights of my life. She was strong as an ox, 6 foot 4 drill seargent. She was a task master, on and off the battlefield.

Caboose and Tucker have had enough.

Tucker: Awh, screw this! I'm gonna let Junior learn how every other kid in the universe does. We're going to the internet.

While Caboose and Tucker go into the teleporter Sarge starts marching around remembering his exploits. 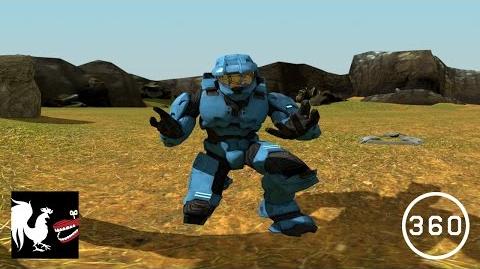 Retrieved from "https://rvb.fandom.com/wiki/Red_vs._Blue_360:_The_Talk?oldid=129869"
Community content is available under CC-BY-SA unless otherwise noted.