Christmas comes early to Blood Gulch. While the Reds and Blues scramble to divide up the loot from a supply drop, Sarge and Church attempt to make heads or tails of a new recruit.

Church: We'll split them, like we agreed for the 100th time!

Simmons: You can't divide an odd number by 2 you idiot!

Church: How about we split the last grenade? Blue team will take the pin and red team, you guys can have the rest.

Tucker: Why don't we all just chill out and take a deep breath? There's plenty of stuff for both teams.

Tucker: Get the fuck off, it's mine!

Simmons: Maybe we can find a compromise and share the rifle, you know, like we did with the helicopter thing.

Church: Yeah! Cause that worked out awesome!

Donut: Scoot your caboose, Caboose; it's my turn to steer!

Caboose: Ok! You do the stick thingy and i'll do the pushy button thingies!

Simmons: Hey Sarge? I think i saw the new guy move his head.

Sarge: Excellent! You're awake! We were worried you'd suffered irreversible brain damage when we shot down the-uh-i mean uh...when the supply ship crashed horribly and completely on its own, with no interference from us whatsoever! Welcome to the red team, rookie!

Church: Hey, not so fast, Sarge! We don't even know what team he's on yet. Hey Buddy, what are you? Red or Blue?

Sarge: Hm, the strong and silent type eh? I like the cut of your gib! Grif and Simmons blithering and blathering, i can hardly get a word in edgewise!

Sarge: Shut up Simmons! I can't even hear myself think! Come on son, we'll get you settled in Grif's bunk.

Tucker: Ha ha! Give me my rifle!

Caboose: Uh, that is not the ejection handle!

Donut: Oops! Silly me! Here it is!

Tucker: Are you being sarcastic? Because that was fucking sweet!

Church: Shut up you morons! Run!

Sarge talking to the viewer

Church talking to the viewer 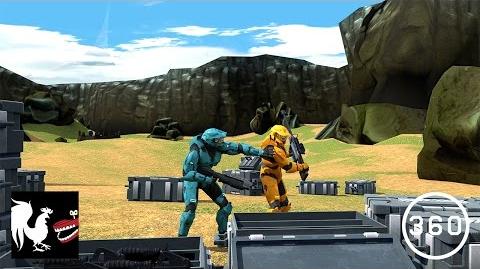 Retrieved from "https://rvb.fandom.com/wiki/Red_vs._Blue_360:_Supply_Drop?oldid=138814"
Community content is available under CC-BY-SA unless otherwise noted.