Red vs. Blue Wiki
Register
Don't have an account?
Sign In
Advertisement
in: Series, Season 17, The Shisno Trilogy

Red vs. Blue: Singularity is the seventeenth full season of Red vs. Blue. It is the third and final installment in the The Shisno Trilogy, which began with Season 15, as well as a direct continuation of the previous season. Jason Weight returns to write the season, while machinimators Josh Ornelas and Austin Clark co-direct. Joe Nicolosi, writer/director of the previous two seasons, moved to other projects in 2018; however, he did outline the story alongside Weight and Miles Luna,[2] who provided additional writing.[3]

The season was announced on January 28, 2019, and premiered on March 9. The first trailer for the season, as well as the official synopsis, were released by Collider on March 7.[4] Nearly a year after airing exclusively on Rooster Teeth's official website, the episodes started being uploaded weekly on the RT Animation YouTube channel, starting on February 3, 2020.

Despite being teased in the finale of the previous season, Singularity is not shot in Halo 2 Anniversary[5], instead utilizing several previous Halo games such as Halo: Combat Evolved for scenes set in the past (unlike The Shisno Paradox, which almost exclusively used Halo 5: Guardians).

Singularity also serves as the final season of the original Red vs. Blue series, having been softly rebooted with a new cast of characters, setting, and plot with the release of the following installment.

It took two seasons for the Reds and Blues to break the universe, but they’re about to discover that things can always get worse.

The flow of time is in disarray now that Chrovos has been freed from their old prison, and the Reds and Blues are unwittingly trapped, reliving their past memories. Fortunately, there’s still one person in the universe who can do something about it: Donut. Thanks to his quick thinking, Donut manages to trap Chrovos in a temporary cell, but it won’t hold for long. Chrovos’ lackey, Genkins, travels through time with the Reds and Blues and changes the events of their history, creating cracks in an increasingly fragile timeline. If Donut can’t find a way to snap his friends out of it, Chrovos will truly be free and life as we know it will be rewritten.

Simmons and Lopez have some very important information about the TRUE holidays we should all be celebrating.

Join the Reds and Blues as they discover the finer details of art, and learn proper museum etiquette! 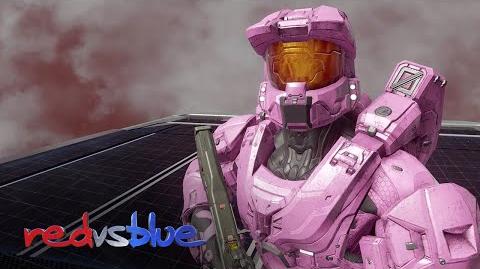