Ended
Red vs. Blue: Season 5 is the fifth full season of Red vs. Blue. It began airing September 30, 2006. The season continues the story when a ship lands in Blood Gulch, an evil plan is concocted, and friends become enemies; with the addition of two new arrivals: Grif's sister and Tucker's son.

It is the fifth and final installment in The Blood Gulch Chronicles.

The fifth season of the action-comedy series Red vs. Blue and marks the end of The Blood Gulch Chronicles. Three new arrivals keep the Red and Blue armies on their toes as they fight, bicker and argue for control of the universe's most worthless piece of real estate -- a box canyon in the middle of nowhere. In the riotous conclusion of the series that took the Internet by storm, The Blood Gulch Chronicles return with the usual gang of luckless troops -- joined by a mysterious stranger, a half-alien child, and a crashed ship. Together they discover a hidden world that could finally answer the question, "Why are we here?"

Grif, Simmons and Sarge share their plans for dealing with a zombie invasion with Doc, while the Blue Team pretends to be zombies to scare the Reds so they can capture the Red flag.

Let's All Go to the Movies[]

You Know What We Mean[]

Simmons and Grif begin to present a Merry Christmas/Happy Holidays message but are interrupted by Doc who explains that the holidays can be offensive to many people.

Grif and Simmons complain of the constantly advancing state of current technology, seemingly rendering each device obsolete shortly after release. Sarge argues that the best way for a gadget to remain high-tech is to never make it into the public's hands, and that money should be contributed to items that "don't exist, and hopefully never will". Some examples are HHD DVVDD BVD players, Red-ray discs and MP48s.

Church and Tucker introduce a series of RvB videos designed for different countries in Europe (and Japan) and comment on them.

The Silverlight 2007 Video: Sweating the Details[]

On July 31, 2007, an unnamed, five-episode series premiered on five retail websites, including those of Best Buy, Circuit City, and Gamestop. These episodes detail the Red Team's transition from Halo 2 to Halo 3; Sarge introduces his men to the new graphics, weapons, and vehicles. Segments are intermixed with comments made by Church and Tucker, who are spying on their activities.

Sarge explains to the Reds about the basis weapon changes in Halo 3. He shows the change in the Needleras an example.

Sarge explains to the Reds about the new vehicles in Halo 3, like the Mongoose.

Sarge explains to the Reds about a new feature in Halo 3: Equipment.

Sarge explains to the Reds about the new locations in Halo 3. Church shows them a few maps they can choose from.

The Reds and Blues begin unpacking their bases for their move to Halo 3.

Released in high-definition on the Xbox Live Marketplace and on the general site, Simmons and Sarge, in an attempt to calm down avid fans waiting for the public Beta test of Halo 3, play them a video introduction in which the cast of Red vs. Blue welcome them to the Beta, and point out many of its features as well as possible problems.

The Reds and Blues pick their new teams and explore the new bases and equipment of Valhalla. The Reds discover new motorbikes while Donut has fun with the "man cannon". Meanwhile, the Blues discover several weapon enhancements.

Sarge calls Church, Tucker, Grif and Simmons together to explain Master Chief's image wants to protected and that a new understudy will be chosen. After explaining the various criteria each candidate was judged on, Sarge eventually reveals the new understudy to be Tex. As compensation, he offers the others roles as stunt doubles with screen tests consisting of them being shot or blown up.

Available on limited edition Halo 3 branded Microsoft Zune media devices, this video was also created with the Halo 3 Beta engine. The cast go over the various functions of the Zune, though they lament how the local radio stations (in particular three ran by Sarge, Tucker and Doc) they can receive have poor content, and the pictures they can share are only of Sarge injuring Church over and over again.

The Reds and Blues showcase a scientific video for Spike TV's 2007 VGA Awards.

The group journeys through the newest Halo 3 maps. They get a grand tour with Guilty Spark's stunt double, Ralph, exploring the Foundry, Rat's Nest, and Standoff maps, and describing the capabilities of Forge. In Foundry, Simmons creates a mancannon for firing objects at Grif. Ralph explains the layout of Rat's Nest while discouraging Church from touching a twenty megaton warhead. The Reds are impressed by the base in Standoff, which Caboose claims to have created. Ralph concludes by announcing the release date for the maps.

Rules of the Game[]

Church and Simmons explain the rules and regulations of the new hit sport known as Grifball. And also Sarge is pleased by this sport because you get to kill Grif as many times as you want and, according to Caboose, "It's fun because you get to use a hammer!" 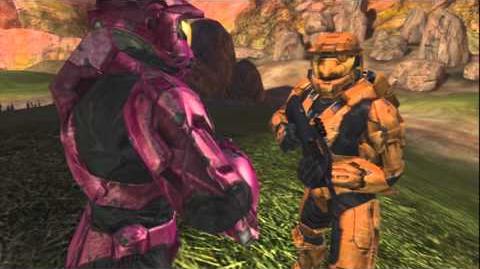 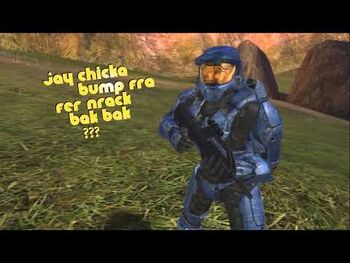