Ended
Red vs. Blue: Season 4 is the fourth full season of Red vs. Blue. It began airing August 29, 2005. It continues the story with the Reds returning to Blood Gulch and the Blues going on an ancient quest. This season features 20 episodes, as opposed to the standard 19 for the first three seasons, a first for the series. This season also features an alien model character, another first. The Season 4 DVD was released on May 4, 2006 and arrived in GameStop stores on May 9, 2006.

It is the fourth installment in The Blood Gulch Chronicles.

The fourth season of the action-comedy series Red vs. Blue and part of The Blood Gulch Chronicles. A bomb with a bad attitude, an alien with an epic score to settle, and the usual gang of hapless soldiers are on a quest to save the universe from an ancient prophecy of destruction. The situation doesn't look too good...

Damien Fahey is visiting the Blue team, and tries to talk Church into letting him drive Sheila, when the Reds show up to berate Church for not following the MTV formula. Created to introduce a music video on the show, as part of a special segment done on Rooster Teeth Productions.

Grif attempts to leave with Simmons to see the launch of the Xbox 360, only to be sidetracked by Sarge.

After the launch of the Xbox 360, the teams have to deal with various strangers walking through the battle looking to use the console's special online features. Released exclusively on the Xbox Live Marketplace for download.

The teams try to come up with resolutions for the first annual "Blood Gulch Resolution-off" as the new year approaches.

Church, Grif, and Caboose all prepare to head to Scotland for the EIEF festival. Church asks Grif and Caboose to research Scotland so that they do not seem like tourists. When they are unable to find any satisfactory information, Church gets Headquarters to send them an expert.

The characters give some tips on how to survive the rising price of gasoline, such as the alternative of milk, though it is more expensive.

The characters throw together special videos that can be used for any occasion.

The Forbes.com 2006 Video: The Cash is Always Greener[]

The Winter Lames: The Olympics Suck[]

The Reds and Blues tell their thoughts about the Winter Olympics and how it should be more "extreme".

How About a Nice Game of Tag?[]

This video was originally created for Microsoft Puzzlehunt 11 but was then used by Rodger Wolfson for Bungie.net users to obtain the Recon armor for Halo 3. It starts with Church commenting about the players trapped in the game while Tucker gets shot by Simmons, Grif and Caboose. Next we see Sarge shocked to see that Donut is trapped in a computer. Sarge comments that Donut looks "digitally and computerized looking", although really Donut is in the real world. Sarge calls helpdesk and is told that the players will need to solve enough puzzles to save the world. Caboose says that the alien likes puzzles and wants to play a game like Duck, Duck, Goose except that it involves shooting the characters. Caboose then explains that the alien would have a flag and a jetpack and the players would have to work out what the alien is trying to say. When Tucker asks "And why do we want to play this?", Caboose replies "Would you rather play ... tag?" and the alien throws a plasma grenade at Tucker. 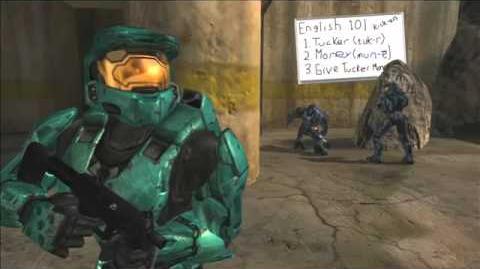 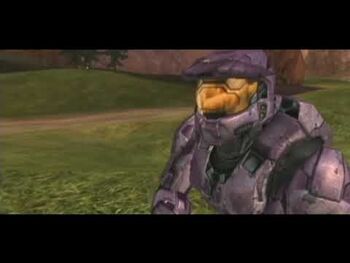