Ended
Red vs. Blue: Season 2 is the second full season of Red vs. Blue. It began airing on January 3, 2004. The season is set three months after the first season and continues the story of the soldiers in Blood Gulch. The season introduces a new character, Doc, and a new villain, O'Malley.

It is the second installment of The Blood Gulch Chronicles.

The second season of the action-comedy series Red vs. Blue and part of The Blood Gulch Chronicles. When a mild-mannered medical officer finds himself deployed to the most worthless stretch of land in the entire galaxy, the last thing he expects to find are his first patients dead, a poltergeist haunting a robot, a 200-ton tank in the center of a love triangle, and an evil strain of artificial intelligence attempting to enslave all of humanity.

A non-canonical episode where Sarge and Simmons are supposed to be dead due to the Warthog's self destruct sequence. This episode was made as an April Fools joke.

A Message to the Science Community[]

After an interrupted introduction, the teams complain about the number of NASA-sent space exploration rovers in the gulch, noting it would be much easier to call them using a phone if the they want to find out what the canyon is like.

Sarge and Tucker talk about how to approach your mother with gifts on Mother's Day.

Sarge whines to Tucker about how much taxes he has to pay. Doc appears and tries to sort out their problems - though he nearly gets killed instead.

Donut attempts to convince Doc and Tucker that they must pinch him for not wearing green armor on St. Patrick's Day.

Donut now tries to convince Doc and Tucker that he is allowed to pinch them for not having a flag on Flag Day. He then suggests such festive games, such as "raise the flagpole".

Church, Caboose, and Donut demonstrate the do's and don'ts when using fireworks on the 4th of July.

Church and Grif argue over what the "X" stands for in South x Southwest.

Sarge tells Grif, Simmons, Church, and Tucker about how great the upcoming Halo 2 campaign will be.

After Ed Robertson gave a shout out to Red vs Blue on his blog, Rooster Teeth eventually contacted his band Barenaked Ladies and did special videos for their upcoming tour, promoting the album Everywhere for Everyone. The videos are available on the RVBX box set, and audio versions appear in the Play Everywhere for Everyone series that recorded every concert (which included one in Rooster Teeth's own Austin).

The Reds and Blues reveal they have been invited to attend the Barenaked Ladies concert.

Church and Simmons attempt to greet the audience, but are interrupted by obvious attempts at subliminal messaging.

Grif and Simmons wait in the bathroom line.

Church complains about his poor seats for the concert, and begins to heckle Simmons in the front row.

Church and Tucker introduce a guide to concert-going etiquette.

The crew runs into obstacles while trying to film an introduction to the convention.

Church promotes the screening of Red vs. Blue at the Alamo Drafthouse.

Blue Team informs the audience that Red vs. Blue will be screening in a movie theatre in the United Kingdom.

In anticipation of the release of Halo 2, this video was released on Bungie's website. In it, Sarge shows a video of supposed improvements to vehicles, weapons, and bases in reference to their actual updates in the new game, though they are either ineffective or make things worse from the viewpoint of a soldier defending himself.

The Computer Gaming World 2004 Video: What Could Have Been[]

Church and Grif explain that, before Red vs. Blue was created, Computer Gaming World included a previous Rooster Teeth video on a DVD and people began visiting their website. Wishing to take advantage of the visitors, they went through multiple ideas for a series, mostly certain film genres, before settling on Red vs. Blue.

Church and Grif discuss the differences between real life and the internet to newcomers. 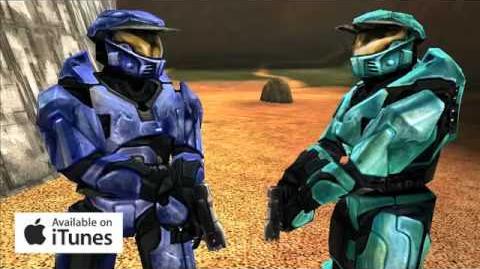 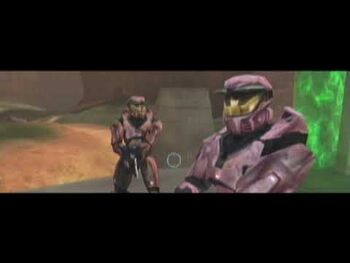