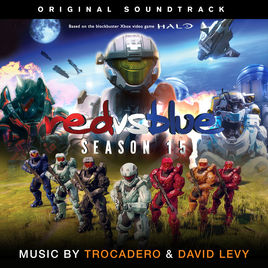 The Red vs. Blue: Season 15 Soundtrack contains music from Season 15. The music is composed by Trocadero & David Levy. It was released on August 10, 2018 on iTunes[1] and Amazon[2]. A CD version is sold on the Rooster Teeth store[3]. With over 60 tracks, it is the longest soundtrack to date.

Retrieved from "https://rvb.fandom.com/wiki/Red_vs._Blue:_Season_15_Soundtrack?oldid=141869"
Community content is available under CC-BY-SA unless otherwise noted.