Ended
Red vs. Blue: Season 15 is the fifteenth full season of Red vs. Blue. The season was first announced after the end of Season 13, alongside Season 14.

The season premiered on April 2, 2017[1][2][3] for Rooster Teeth FIRST members and April 9, 2017, for the general public. Series creator Burnie Burns initially stated that a new writer-director will be taking over from Miles Luna, who wrote and directed The Chorus Trilogy and contributed to Season 14.[4] It was later confirmed that Joe Nicolosi, writer for the Season 14 episode The Brick Gulch Chronicles, will be writing and directing this season.[5]

Unlike the previous seasons, Season 15 is the first standalone season, with Joe Nicolosi explaining that the "story of the Blue versus Red will conclude at [episode] twenty-one," adding that the following season would be a completely new adventure. Despite this, elements from its story would become important plot points in The Shisno Trilogy, which it led directly into, retroactively making it the first installment in said story arc.

The award-winning, longest-running web series Red vs Blue returns with a vengeance with Red vs Blue Season 15 . A series of violent attacks across human space has people demanding answers. Who are these Reds and Blues? And why are they so bloody ruthless? One reporter sets out to uncover the truth, determined to find out why the once beloved Reds and Blues have turned so malicious, taking her on a galaxy-spanning adventure filled with many twists and turns.[6]

A house is a little hard to define, even if you think you know what you're talking about. Unless you're a hermit crab. Then it's pretty easy.

According to Joe Nicolosi himself, the season displays a theme of consequence, which is shown in various examples both small and large. Dylan's loyalty and ambition towards her job cause rifts in several of her relationships. Her disobeying the law in order to get her story at the UNSC supply depot causes her initial cameraman Frank to quit, tired of being imprisoned and shot at because of her actions. It is later shown that Dylan even has complications with her husband, James Adler, who questions whether she's committed to her job or her marriage. In addition, Dylan revealing Church's message to the Reds and Blues causes Grif to quit the group, something Dylan didn't anticipate.

The events of the season as a whole are caused by the actions of Carolina and Tex's rivalry, which resulted in Biff's death. As a result, Temple and the Blues and Reds make it their goal to hunt down and kill all Freelancer and UNSC personnel. Doc also betrays the Reds and Blues for their constant abuse and neglect towards him over the years, ultimately deciding to join the Blues and Reds. Tucker is forced to pay child support for several illegitimate children after impregnating several women on Chorus. In addition, Tucker's recklessness to fight the Zealots guns blazing causes Washington to get shot. Sarge drops Surge to salute, resulting in the latters death.

Some of the season's consequences, however, are positive. Dylan deciding not to kill V.I.C. but rather bring him along her investigation proved to be beneficial, as he was able to help her discover the Blues and Reds' true motives by hacking into Temple's computer. Locus' regret towards his actions during the Chorus Civil War leads him to turn over a new leaf.

One theme the season presents is regret. Many of the characters, having been through several trials and tribulations, reflect on their past actions and wish they could go back and do things differently. Dylan, for example, shows regret after her conversation with her husband James, feeling guilty for not placing more time on her relationship.

Carolina expresses that she too still holds some regret for her actions during Project Freelancer, after seeing the life that Illinois pursued after his time there. She explains to Wash that she feels that she left behind a possible future with York and is unsure if she is able to start over, though Wash explains otherwise.

Locus expresses regret over his contributions in the Chorus Civil War, having vowed not kill another individual ever again. Though others still see him as a murderer, Locus strives to better and looks for ways to avoid violence.

Both Sarge and Grif express regret for abandoning their teammates, with the former siding with the Blues and Reds and the latter refusing to join them on their search for Church. Grif eventually teams up with Locus to help devise an escape plan, while Sarge ultimately sides back with the crew after freeing Dylan and Jax.

Tucker also expresses regret over the mistakes he made this season, particularly regarding his trust in Temple and the Blues and Reds and Wash getting shot due to his desire for revenge. It takes Grif to boost his morale and spur him into leading the others in stopping the Blues and Reds.

Doc later shows regret himself for betraying the Reds and Blues when he discovers what the Blues and Reds are really up to and was locked up for trying to stop them. He tries to make up for his betrayal by tending to Carolina after she finally collapses from exhaustion, despite Tucker's initial distrust of him.

Caboose express regret over not being able to say goodbye to Church after his death during the assault on the Staff of Charon or to thank him for being his friend. Though Caboose still held onto the belief that Church will come back because he had in the past, though that idea seemed to die when Temple played the uncut message that was sent to the Reds and Blues of Church calling command for help because Tucker and Caboose sent grenades into the toilet and it exploded.

This season features the theme of mirroring as many elements mirror certain events, characters, and locations from past sagas. One primary example is the Blues and Reds who are a mirror of the Reds and Blues. Unlike the Reds and Blues, who grew somewhat content with the abuse they endured by Project Freelancer by overcoming it, the Blues and Reds grew more vengeful and improved as combatants by fueling their revenge. On the other hand, the Blood Gulch crew improved as fighters by fighting for more noble purposes. Desert Gulch itself can be seen as a decayed and grittier version of Blood Gulch, which also ties in with the contrast between the two sim trooper groups. While the Red and Blues now live better lives and became heroes, the Blues and Red didn't which ultimately led to their downfall, as several of them perished and the rest of the team were sent to prison for their crimes. 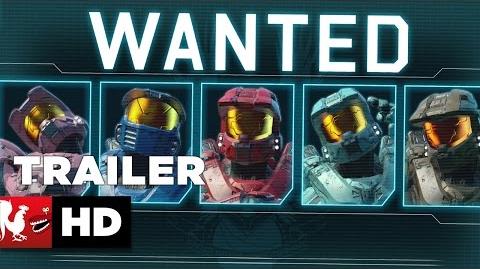 Retrieved from "https://rvb.fandom.com/wiki/Red_vs._Blue:_Season_15?oldid=143994"
Community content is available under CC-BY-SA unless otherwise noted.