Ended
Red vs. Blue: Recreation is the seventh full season of Red vs. Blue. The first episode aired on June 15, 2009, with new episodes being released each Monday at 9 PM CST. It is the direct sequel to Relocated and follow-up to Reconstruction. It is the second installment in The Recollection.

Red vs. Blue: Recreation is the seventh season of the action-comedy series Red vs. Blue and is part of the Recollection trilogy. Buried beneath the sand is the answer to a mystery more dangerous than anyone could possibly understand. It's the perfect mission for a bunch of ragtag soldiers who don't know what they're doing anyway.

Sarge and Simmons give their best advice on how to deal with flammable situations.

Go behind-the-scenes as the guys from RvB prepare to film a PSA to celebrate their sixth anniversary.

The RvB guys get an early look at a new type of mission featuring "regular" soldiers like them... or so they think. The first of three episodes featuring Halo 3: ODST.

Sarge reminisces about his former mentor, and the guys worry about who or what they'll have to face in their ODST scrimmage match.

The RvB guys try out some new uniforms, and Church passes on some important information he heard about a certain legendary sergeant.

The stunning conclusion to auspicious beginnings. 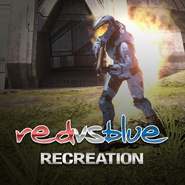