Red vs. Blue Wiki
Register
Don't have an account?
Sign In
Advertisement
in: Series, Red vs. Blue

"Some days they’re fighting each other and others they’re teaming up to save the world. What doesn’t change? No matter the form, the Red vs. Blue war rages on!"
—Series synopsis

Red vs. Blue, often abbreviated as RvB, is a science-fiction comedy web television series created by Burnie Burns and produced by Rooster Teeth. The shows first seventeen seasons focused on the lives and adventures of the Reds and Blues from a box canyon known as Blood Gulch, while the eighteenth season, serving as a soft reboot for the series, focused on another group of soldiers known as Shatter Squad. With over 300 episode, Red vs. Blue is the longest running episodic web television series. Ever. Of all time.

The writing process for the series has changed over time. Early in season 1, Burns wrote the episode scripts from week to week, with minimal planning in advance; major plot events were conceived shortly before they were filmed.[1] For the second season, Matt Hullum became a main writer.[2] A rough plot outline is now written before a season begins, although the actual content of an individual episode is still decided on a more short-term basis.[3] Because Red vs. Blue is loosely based on the Halo universe, Rooster Teeth encountered some difficulties when trying to synchronize events in the series with the release of Halo 2.

Aside from a few scenes created using Marathon Infinity, Marathon 2, and the PC version of Halo, Red vs. Blue is mostly filmed with interconnected Xbox consoles. Originally using the Halo: Combat Evolved engine, it has since been filmed using four sequels and one prequel of the popular video game franchise: Halo 2, Halo 3, Halo 4, Halo: Reach, and Halo 5: Guardians as well as utilized Computer Generated Imagery. During The Blood Gulch Chronicles, episodes were largely set in the Halo map Blood Gulch and its Halo 2 counterpart, Coagulation while some episodes were filmed on other maps, including Sidewinder from Halo and Zanzibar from Halo 2. After The Blood Gulch Chronicles had ended, they began using more locations within later games, such as Valhalla from Halo 3 and Exile from Halo 4. Within a multiplayer game session, the people controlling the avatars "puppet" their characters, moving them around, firing weapons, and performing other actions as dictated by the script, and in synchronization with the episode's dialogue, which is recorded ahead of time.

The "camera" during the first four seasons was simply another player, whose first-person perspective is recorded raw to a computer. As the recording occurs within the game, a few different bugs and post-production techniques have been exploited in order to achieve desired visual effects. In particular, Adobe Premiere Pro is used to edit the audio and video together, impose letterboxing to hide the camera player's head-up display, add the titles and fade-to-black screens, and create some visual effects that cannot be accomplished in-game.[4] For Season 5, the PC version of Halo 2 was used to film episodes, making use of detaching the camera. From Reconstruction onward, Halo 3's (along with its sequels/prequels) theater mode was utilized for shooting scenes that were more difficult to achieve using previous titles.

In 2009, Monty Oum was hired to work on small special effects in Recreation, most notably Epsilon's laser beam in Think You Know Someone.[5] During the production of Revelation, Monty began working on animating the Red vs. Blue characters in Computer Generated Imagery, which was blended within Halo 3 by Nathan Zellner and Matt Hullum. Since then, Rooster Teeth has moved to a new office building with a whole empty storage room, used for motion capture. Rooster Teeth also currently have a full team of animators working on Red vs. Blue's animation, alongside Monty Oum. They have produced the Poser animation for Season 9 and Season 10.

During the production of the third saga, Rooster Teeth Productions decided to employ a new writer to the series. Around 2012, Miles Luna became the writer of Red vs. Blue, who has written for the Where There's a Will, There's a Wall mini-series and Season 10, did the next three seasons, The Chorus Trilogy. For Season 12, Chris Dike was hired to take over for the series' additional animation, which was blended with the in-game engine similar to Revelation. The full animation staff returned for Season 13, but did not return for the following seasons. Not knowing how to continue the cliffhanger set by the ending of Season 13, Rooster Teeth decided to make Season 14 an anthology with many writers, serving as an unofficial audition for the next showrunner. After writing The Brick Gulch Chronicles for Season 14, Joe Nicolosi was chosen to helm Season 15 and The Shisno Paradox. Jason Weight was brought on to co-write The Shisno Paradox and was later chosen to write Singularity while machinimators Joshua Ornelas and Austin Clark were promoted to directors.

In 2020, Torrian Crawford was brought on to helm a new soft reboot of the series as showrunner and co-director with Noël Wiggins and Joshua Kazemi, titled Red vs. Blue: Zero. This would later be followed by Family Shatters, a non-canonical spinoff of Zero, in 2021.

For 2022, Rooster Teeth has confirmed that while the main show will continue with a nineteenth season, it would not be produced right away as it will be the first in a "new storytelling phase" of Red vs. Blue that will most likely be unrelated to both Legacy and Zero, though there are plans to follow up on remaining plot threads from Legacy before this plan moves forward.[6]

The Blood Gulch Chronicles is the first main saga in the Red vs. Blue series, spanning 5 seasons, 100 episodes, and a 5-part mini-series.

The Recollection is the second saga in the main series. It includes Reconstruction, Recreation, and Revelation—seasons six, seven, and eight respectively. It also includes two mini-series: Recovery One and Relocated.

The Project Freelancer Saga is the third main saga of the series, spanning two seasons and two mini-series. Unlike the previous two sagas, however, the Project Freelancer saga focuses on prequel events taking place before The Blood Gulch Chronicles, as well as present-day events.

The Chorus Trilogy is the fourth main saga of the series and takes place after the present-day events of Season 10. The story focuses on the Reds and Blues shipwrecked on a long forgotten planet and unexpectedly becoming involved in the planet's civil war.

Season 14 was an anthology series based within the universe of Red vs. Blue, featuring various canonical and non-canonical episodes surrounding numerous characters and locations.

The Shisno Trilogy is the fifth main saga of the series, taking place ten months after The Chorus Trilogy. The story focuses on the Reds and Blues getting themselves involved in an intergalactic conflict after being brought out of retirement by a reporter.

In 2020, Rooster Teeth produced a soft reboot of the series brainstormed by Torrian Crawford, titled Zero, the titular antagonist, a mysterious syndicate leader, seeks Ultimate Power while a special operations unit called Shatter Squad must work together to stop him. After just one season, this new direction would be dropped following a largely negative reaction, though will still remain canonical to what came before it.[7] Family Shatters is the non-canonical sequel to this season.

Public Service Announcements, or PSAs, are short videos featuring the Reds and Blues delivering their opinions and suggestions for various topics. These are generally considered non-canonical to the main series, though various canon facts would first appear in a PSA such as Church's first name.

Special Episodes are short videos featuring the Reds and Blues, usually celebrating holidays or promoting events for other companies and properties such as Halo. Like PSAs, these are also generally considered non-canonical to the main series.

Team Slipspace: An Epic Grifball Saga is the first spinoff series of Red vs. Blue, centering on the athletes that make up the titular Grifball sports team. 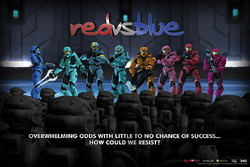 Red vs. Blue is widely credited with attracting public attention to Machinima. Although examples had existed since the 1990s, Clive Thompson credits Red vs. Blue as "the first to break out of the underground".[8] Tavares, Gil, and Roque call it Machinima's "first big success".[9] Thompson notes that "Microsoft has been so strangely solicitous that when it was developing the sequel to Halo last year, the designers actually inserted a special command — a joystick button that makes a soldier lower his weapon — designed solely to make it easier for Rooster Teeth to do dialogue." The series has inspired other machinima productions, including The Codex, Fire Team Charlie, and This Spartan Life.[10]

Due to the series' large and growing popularity, many within the video game industry have made reference to the web-series numerous times. For example, the Halo franchise has referenced the series' characters and recurring jokes in many of its games, as well as hiring Rooster Teeth Productions to promote their products through the web-series. Critics have even stated Red vs. Blue to have amazing character development which other media should take an example of.