Red vs. Bleu is the third episode of the second season, and the twenty-second of The Blood Gulch Chronicles.

Outside of the Blue Base, Sarge gives Blue Team the chance to surrender after Red Team runs out of ammunition. Grif is skeptical to Sarge's plan, knowing that Blue Team will figure out his bluff. Sarge tells him to be quiet, believing that the Blues won't figure out their current state. At the same time, Church is convinced that the Reds have run out of ammo to shoot. He then asks what their terms of surrender are.

Simmons is surprised that their plan is working and asks Sarge if they can get Lopez back. Grif agrees, pointing out that he can repair their warthog. Donut asks if they can have Blue Team's flag as well. Grif, at the last moment, also adds cake to their list of demands. Sarge begins to state Blue Team's terms of surrendering, starting with their flag. Simmons interrupts him, reminding them of there last incident they had with Tex when Donut had captured the Blue Team's flag from before. Sarge then ask if they can have their "mechanized droid guy" (Lopez) back instead.

Church, upon hearing this, voices concern. Tucker asks on what he plans to do. Church, being in possession of Lopez's body, tells him no way, stating that he had just gotten his new body. He then tells the Reds that Lopez is not with them anymore, and ask if they would like to take their medic, Doc, as "hostage" instead. Doc tells him he is supposed to go to Red Team anyway. Simmons agrees to the deal, but Grif thinks they can hold out for something much better than a medic. He is then reminded by Simmons that they are out of ammo and therefore cannot. Grif then agrees to the deal, telling Sarge to take the offer.

Before sending Doc over, Church asks how Caboose is doing. Doc tells him that he is fine and is "very alert and responsive". Tucker is confused, asking if he is referring to Caboose's mental state. Church clarifies, asking about Caboose's toe he had purposely shot. Doc tells him that Caboose's pinky toe had fallen off, due to the result of his injury, about an hour ago. Caboose is saddened by the fact, responding with his menacing voice that his toe "shall be avenged". Doc then tells Church to send him over to the Red's, stating that he had done everything he could for them. Church informs the Reds that he is sending over Doc, and asks what Blue Team gets in return.

Simmons decisively refutes his request, telling them they get nothing but "humiliation and ridicule". Tucker responds that they already have been, and asks what else they have. Sarge asks what the Blues want. Church demands that they admit Red Team sucks. Sarge then asks if only one of them admitted they suck, instead of Red Team as a whole. Grif comments on the matter, asking if Sarge is referring to Donut. Two hours later, Grif is forced to verbally humiliate himself in front of the Blues, much to the delight of Sarge. Simmons asks if Blue Team is happy. Church agrees, and tells Doc to head over.

When Doc arrives, he asks Grif if anything was put in their water supply in Blood Gulch, noting their overall abnormal behavior. Grif tells him that they ran out of water six months ago and that they have been drinking ketchup, soy sauce, and gravy (among other things) since then. Sarge comments that he only drinks the "blood of his enemies" as well as various beverages.

The Reds and Blues are not shooting at each other. Sarge is addressing Church.

Sarge: We are giving you a chance to surrender!

Grif: There's no way this bluff is gonna work.

Simmons: I can't believe this is actually working. See if we can get Lopez back, Sarge.

Grif: Oh yeah. 'Cause then he can fix the Warthog.

Donut: Oo oo, Sarge - tell them we want the flag.

Grif: Yeah, and some cake!

Sarge: Alright, Blues! First off! We want your flag-!

Simmons: Wait wait wait just a second. The last time we got the flag, the chick in the black armor showed up.

Sarge: ...to stay right where it is! Keep the flag! But we do want our mechanized droid guy back!

Sarge: You may know him as Señor El Roboto!

Church: Chingado, no way. I'm not giving back my body. I just got this thing.

Sarge: And don't think you can keep his nuts! Or bolts, or other mechanical parts you may have!

Tucker: Yeah, he left! He was all like "Sayonara!" and then he just took off!

Church: That's not Spanish you idiot, that's French. Let's try this: Hey, Reds! How about a medic?! Would you take a medic as a hostage?!

Doc: A hostage? But I'm supposed to go over there.

Simmons: Meh, that sounds pretty good to me.

Grif: I don't know, I think we can hold out for more.

Simmons: We don't have any bullets, dumbass.

Doc: What, that thing? That fell off like half an hour ago.

Caboose: (sad) Rest in peace, pinkie toe... (in O'Malley voice) You shall be avenged!

Doc: (sighs) Tell you what... Go ahead and send me over. I really don't think I can be any more help.

Church: Okay! We're gonna send over our medic! Now what do we get?!

Simmons: You?! You're surrendering! You don't get anything except humiliation and ridicule!

Tucker: We've already got that! What else do you have?!

Sarge: What do you want?!

Church: How about if you admit that the Red Team sucks?!

The Reds mutter to themselves for a moment.

Sarge: What if we admit that one of us sucks?!

Screen blacks and shows "two hours later" in white letters, then returns to the Blues.

Church: Okay then! We agree to the terms?! You first, and then we send over the medic!

Sarge: Get on with it, Grif.

Grif: (grunting sigh) I would just like to let everyone know.. that I suck!

Grif: And I like ribbons in my hair! And I want to kiss all the boys!

Sarge: This may be the best surrender of all time.

Simmons: Okay, is that good enough?!

Doc runs over to the Reds.

Grif: Man, I really hope you're worth this.

Doc: Can I ask you a question? Do they put something in the water here?

Doc: No water.. Then what do you drink?

Sarge: I only drink the blood of my enemies. And occasionally a strawberry Yoo-hoo. Or a Sarsaparilla. Grenadine, straight from the can. Deeelicious. ...Oh, occasionally I do enjoy a 'Sex on the Beach.' Or a piña colada. (singing) If you like piña coladas, hengh! Gettin' caught in the rain, hengh! And you're not in to yoga, engh! Grif just has half a brain, ungh. 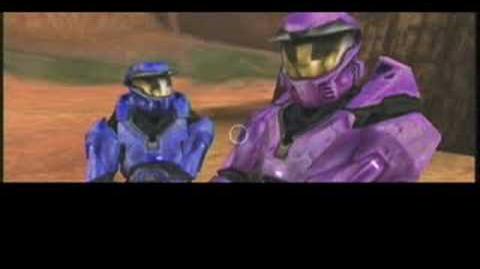 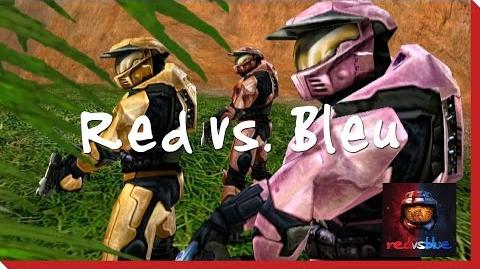 Red vs. Bleu - Episode 22 - Red vs. Blue Season 2
Remastered
Add a photo to this gallery
Retrieved from "https://rvb.fandom.com/wiki/Red_vs._Bleu?oldid=128782"
Community content is available under CC-BY-SA unless otherwise noted.