Red Gets a Delivery

Red Gets a Delivery is the second episode of the series. It introduces the Red Team's robot Lopez and their newly arrived Warthog.

The episode begins with Grif and Simmons being called to an impromptu-meeting where Sarge, the team's non-commissioned officer and leader, announces that a new recruit will be arriving as well as introducing their newly arrived vehicle, the M12 LRV or "Warthog". Grif claims that it doesn't look like a warthog, but more like a puma, an animal which Sarge believes that Grif is making up.

Church and Tucker are still seen spying on the Reds, as they were in the previous episode. Church tells Tucker about the car, and Tucker responds by complaining about how the Reds get a car while the Blues simply get a tank. Church quickly gets annoyed by Tucker's complaints only for Tucker to rebuke his response stating that "You can't pick up chicks in a tank". The episode ends with Sarge, and Simmons, sarcastically suggesting other names for the Warthog towards Grif, much to his dismay.

Pan out on Grif and Simmons, who are approaching another Red soldier (Sarge) clad in red armor.

Sarge: Hurry up, ladies. This ain't no ice cream social.

Sarge: Stop the pillow talk, you two. Anyone want to guess why I gathered you here today?

Grif: Uh, is it because the war's over and you're sending us home?

Sarge: (Sarcastically) That's exactly it, Private. War's over. We won. Turns out you're the big hero and we're gonna hold a parade in your honor. I get to drive the float, and Simmons here IS IN CHARGE OF CONFETTI!

Sarge: Goddamn it, Private! Shut your mouth or else I'll have Simmons slit your throat while you're asleep!

Sarge: I know you would, Simmons. Good man. (brief pause) Couple of things today, ladies. Command has seen fit to increase our ranks here at Blood Gulch Outpost Number One.

Grif: Crap. We're getting a rookie.

Sarge: That's right, dead man. Our new recruit will be here within the week, but today we received the first part of our shipment from Command.

Sarge turns towards a hill behind them.

Sarge: Lopez, bring up the vehicle.

A large, armor-plated, jeep-like vehicle comes over the rise with Lopez in the driver seat, who pulls up along side the Reds.

Grif: Shotgun! (realizes he is too late) Fuck.

Sarge: May I introduce our new, light reconnaissance vehicle.

Camera closes in on the front of the vehicle and starts to move left, circling it.

Sarge: It has four inch armor plating, mag bumper suspension, a mounted machine gunner position, and total seating for three. Gentlemen, this is the M12 LRV! I like to call it the Warthog.

Cut to Grif and Simmons.

Sarge: Because M12 LRV is too hard to say in conversation, son.

Grif: I know, but why Warthog? I mean, it doesn't really look like a pig.

Sarge: (after a brief pause) Say that again.

Grif: I think it looks more like a puma.

Sarge: What in Sam Hell is a puma?

Sarge: You're making that up.

Grif: I'm telling you, it's a real animal!

Sarge: Simmons, I want you to poison Grif's next meal.

Sarge: (pointing at the front of the Warthog) Look, see these two tow hooks? They look like tusks, and what kind of animal has tusks?

Sarge: Didn't I just tell you to stop making up animals?!

Cut to a view of the Reds through the sniper rifle scope.

Cut to Church, wielding the rifle, and Tucker, wielding a M6D pistol.

Tucker: What is that thing?

Church: I don't know, man. Looks like uh.. looks like they've got some sorta car down there. We'd better get back to base and report it.

Tucker: (taken aback) A car? How come they get a car?!

Church: What are you complaining about, man? We're about to get a tank in the very next drop.

Tucker: (disappointed) You can't pick up chicks in a tank.

Church: Oh, you know what? You could bitch about anything couldn't you? We're going to get a tank, and you're worried about chicks. What chicks are we gonna pick up, man? And secondly, how are you gonna pick up chicks in a car that looks like that?

Tucker: (sighs) What kind of car is it?

Church: (looking through the scope of the sniper rifle) I dunno, I've never seen a car like that before. It looks like a... uh... like a big cat of some kind.

Church: Yeah, man, there you go.

Sarge: So unless anybody has anymore mythical creatures to suggest as a name for the new vehicle, we're going to stick with the Warthog. How about it, Grif?

Grif: No, sir. No more suggestions.

Sarge: Are you sure? How 'bout Bigfoot?

Sarge: Hey Simmons, what's the name of that Mexican lizard? Eats all the goats.

Simmons: Uh, that would be the Chupacabra, sir.

Sarge: Hey Grif, Chupathingy! How about that? I like it. Gotta ring to it. 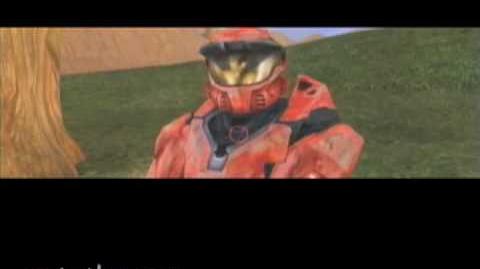 Red Gets a Delivery
Original 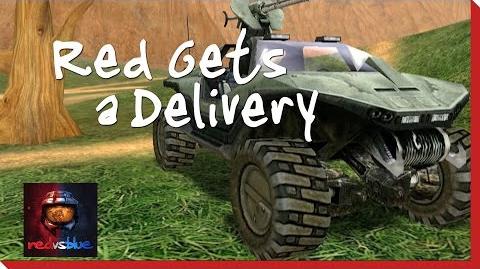 Red Gets a Delivery - Episode 2 - Red vs. Blue Season 1
Remastered
Community content is available under CC-BY-SA unless otherwise noted.
Advertisement