Arriving at the wind-power facility, Washington splits up from Church and Caboose, and both groups move from the beach in different directions to enter the facility. While Church and Caboose head for the base, Church questions Delta, discovering that Washington was only one of several failures in the AI implantation experiments. Delta suggests that Agent Maine's power troubles are only a small indication of what is happening inside his mind. After the group finds the Meta in the facility, they launch an attack which it escapes from. Church and Washington pursue, while Caboose and Delta head in a different direction to flank the Meta and surprise him.

Before Church and Washington can find the Meta again, the Red Team, composed of Sarge, Simmons and Grif, arrive in their Warthog and crash into the windmill. As Simmons opens fire on Church and Washington from the turret, Washington suddenly asks where Caboose and Delta are. It is then revealed that Caboose is lying motionless on the ground as the Meta approaches. Delta projects itself from Caboose's body; when he does, the many AIs the Meta has captured project themselves too and begin beckoning to Delta while he is silent.

Fade in to a mechanical factory

Director: I understand your concern that increased activity would bring increased risk. However, our failsafes are simple but foolproof. A dead or dying agent's beacon automatically notifies our recovery team, and we will be on the scene immediately, to secure all the Military's property.

Washington: Look, there's our cycle. The Meta must be here.

Church: Yeah, because, no one else in the Military would have a standard issue motorcycle. Just like that.

Caboose: Also, the piles of dead bodies might have been a clue.

Washington: Just keep your heads down, and your eyes open. I'm going to advance along that wall. You two take Delta and move up along the other side.

Washington: Don't use the radio unless it's absolutely necessary.

Washington: And don't make a move until I do.

Washington: And no screw ups this time.

Washington: We only have one chance at this before it gets back to full power. I can't take any chances that you guys are gonna botch this.

Delta: Agent Washington, perhaps it would be best if I assisted you in battle rather than helping Caboose.

Delta: Statistically speaking, a Freelancer would be much better trained to use my-

Washington: I said no. Now get going.

Caboose and Church enter the building together, seperate from Washington

Delta: Yes. How may I be of assistance?

While Church and Delta talk, Church and Caboose move inside the building, up and down stairs, past bodies, etc

Church: Hey, can I ask you a couple questions about this Freelancer program?

Delta: Certainly. I will answer what I am capable of answering.

Church: This Alpha thing, wh- why doesn't Washington want you to tell us about it?

Delta: I believe Agent Washington is uncomfortable discussing our program in any fashion. He was one of the many failures during the implantation process.

Church: One of the failures- how many were there?

Delta: Several. The Director felt time was limited, and escalated the pace of experiments. I would classify Agent South as another such failure.

Church: Ay yeah, but she didn't even get an A.I.

Delta: Correct. Agent South Dakota and her brother North were merely another kind of experiment. What would happen if one agent received an A.I. unit, and the other did not.

Church: I guess we found out how well that worked.

Church: I still can't believe she killed her own brother.

Delta: She put him in a position to be killed. South rarely worked in a direct fashion.

Church: What a bitch.

Delta: Other experiments like the Dakotas were common towards the end. For instance, Agent Carolina was implanted with two A.I.s at one time.

Church: Two of them? That would drive me nuts.

Delta: Indeed. She only functioned for a short time, and not very well while she did. Having three minds at one time proved far too... taxing.

Church: Well yeah, but if Agent Maine has more than one A.I., wouldn't he be having problems too? Like that Carolina chick?

Delta: Undoubtedly. Agent Maine's power symptoms are only a small indication of what must be happening inside his helmet.

Church: Oh great, powerful and crazy. What a winning combo.

They reach the mechanical room from the initial fade in, and the Meta is there on a lower level

Church: I hope he gives us some kind of-

Wash throws a plasma grenade down and it explodes

A battle between Wash and the Meta ensues, in which they hit the corpses more than each other. Wash gets the first blow, but the Meta gets the last before leaving the room

Washington: Don't just stand there, after it!

Church throws a grenade and hits nothing

Delta: If I may, I recommend that Caboose and I flank to the right and attempt to surpri-

Church: Just do it!

Caboose runs off to the side and Church and Wash come up to a balcony, watching the Meta run from the building

Washington: There, use your rifle.

Washington: It only counts if you call it!

They arrive at a pool of blood

Washington: Look, there. Come on. Quietly.

Tejano music gradually approaches from a distance, getting louder.

Washington: Hey, do you hear something?

Washington: What is that? Music?

The Reds come charging over the hill in a Warthog

They immediately run in to a windmill blade and are stopped

Washington: Who are they?

Church: They're the Reds from our canyon.

Church: Look Wash, I don't know how they found us, or why they're here, but we don't have anything to worry about.

The Warthog starts being raised up by the windmill blade

Church: Seriously. Not a thing. These guys are idiots. They can't do anything right.

The gun on the back of the Warthog cocks

Simmons starts firing it at them

Cut to Caboose's motionless body as the Meta comes upon it. Delta appears, surrounded by other captured A.I., who welcome him. 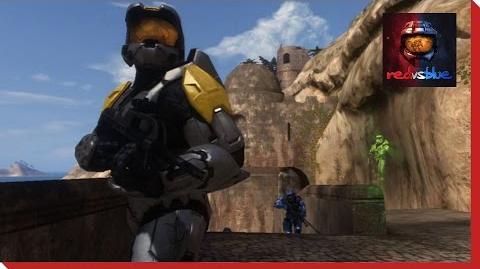 Retrieved from "https://rvb.fandom.com/wiki/Reconstruction:_Chapter_8?oldid=145749"
Community content is available under CC-BY-SA unless otherwise noted.