Reconfiguration is the fourteenth chapter of Red vs. Blue: Revelation and the 167th episode overall. The episode aired on July 26, 2010.

Back at the Freelancer Offsite Storage Facility, Tex fully recovers and discusses Epsilon's motives on freeing her. In an awkward attempt, Church claims that he needed to get Tex out of his head and even refers to her as his girlfriend. Meanwhile, the Reds decide to use the absence of the Blues to put them back into the database. Simmons and Grif decide to go together, after Simmons threatened to change Grif's job description and change his gender to a woman.

Back at the desert, Doc finds out that Washington has taken his suggestion and had the Meta find the Red's trail successfully. Doc simply demands that the two give him credit for the idea.

Fade in to Doc, Wash and the Meta standing over the modified Epsilon unit, which is now olive green

Washington: This thing's been through a lot, it's pretty badly damaged. But now that it's a capture unit we just need to get it near Epsilon, and we can pull him in.

Doc: What if it breaks?

Washington: Don't worry, it'll hold until we get him. After that, it doesn't matter. It can short out for all I care.

Doc: Then what's the point of all this?

Washington: I just have to deliver Epsilon to the Chairman. I don't have to guarantee what condition, I deliver him in. He's just evidence anyway. Meta, grab him. Doc, get ready to move.

Doc: Move, move where? We don't know where they are.

Washington: We know they're not here. So gather your gear, and get ready to move out.

Doc: Well can we track them?

Doc: You know, pick up a trail, like footprints.

Washington: Footprints. In the desert.

Doc: Kh, don't special agents have the ability to track their targets through any kind of terrain? Follow broken tree branches-

Washington: Tree branches. In the desert.

Washington: In the desert.

Washington: Tell you what. Why don't you just stick to not understanding medicine? Don't feel the need to expand your sphere of ignorance.

Washington: Him? Ah, he's always whining about something. (under his breath) Hey Meta, is there any way we could track the Reds by trying to pick up a trail, like a uh, heat signature- or something?

Washington: Yes. I know we're in the desert.

Cut to the facility with Church and Tex

Church: So you back up to a hundred percent yet?

Tex: Yeah. And whatever I didn't learn from Caboose I've been able to pick up from the rest of the guys. Didn't take long.

Church: Yeah we really don't seem to do much.

Tex: Maybe you should get a hobby. Like knitting.

Church: We'll look into it.

Tex: Hey, how did you know how to bring me back?

Church: Honestly I didn't have much choice. I couldn't get you outta my head so I kind of, had to, get you, outta my head.

Tex: Wow, how emo. Maybe you can blog about it.

Tex: When I was beatin' the hell out of the Reds, the alarm said it was 'Level Alpha.' Do you know why?

Church: You know I didn't think about that, no.

Tex: Then I want you to have Sheila give me access to the files here.

Tex: Because I'm gonna figure out exactly what they did to me here. I need to know who I am.

Church: I know who you are. You're my girlfriend.

Tex: Whell, that's probably the most underwhelming description of all time.

Church: Hey. Lots of ladies would be happy to be my girlfriend.

Tex: What other women do you even know?

Church: Um, eyeuh, well there's uh, duhh, that's a-uh, Grif had a sister, she seemed to like me.

Tex: I wouldn't be too proud of that. She was pretty easy.

Tucker: How do you know she was easy, Tex? You know what, never mind, don't tell me. It's better in my head.

Church: Where did you even come from?

Church: You can hurt him. Kill him later.

Tucker: Man, I thought the old Church was whipped but, you're really taking it to a whole new level.

Tex: Why do you even put up with him?

Church: It's not so bad, I mean I admit sometimes it gets pretty hard and I, really don't know how to handle it.

Cut to the Reds watching Church and Tex through a fence

Church: Come on, let's get in there.

Sarge: Simmons, this is our chance. Get in the computer and start entering the Blues back in the database.

Simmons: Yes Sir. Come on Grif, I need your help.

Grif: My help? With a computer? Simmons, you must have me confused with someone who, can help, you, with the computer.

Sarge: Kinda lost your train of thought on that one.

Simmons: Following the Blues is one thing. If I'm entering all these names and records, I need someone to hold up the papers for me.

Simmons: No, but I'm gonna be working in the personnel files. So I can add it to your job description. In fact, I can make your job whatever I want. How does "Chief Executive Butt Taster" sound?

Grif: You can't do that.

Simmons: I can't? I thought you didn't understand how computers work. In fact while I'm in there, why don't I just make you a woman. It's just a checkbox, and we could always use a little more diversity in our team. I know Tucker will be happy.

Grif: Phph, make me a woman. Yeah right. Like changing a form would actually turn me into a woman. I mean that's just... How stupid does he think I... I- I- I better go help him.

Cut to Doc approaching Wash and the Meta from behind

Washington: That's great. You picked up a trail? Really?

Washington: Oh, uh, Meta here was able to pick up a faint trail of the Reds based on gas spectrometry and uh uhum... resident heat signatures.

Doc: What I, thought you said you couldn't do that.

Washington: I didn't say we couldn't do that, I said you are an idiot. Those are two different discussions.

Doc: I want credit for the idea.

Washington: Doc, just let us do our job. You do your job. Anything, medical to report?

Doc: Yeah, one other thing, you know that Stockholm Syndrome where prisoners start to like and identify with their captors after being held hostage for long enough?

Washington: What about it?

Doc: No one has that yet.

Washington: The feeling is mutual. 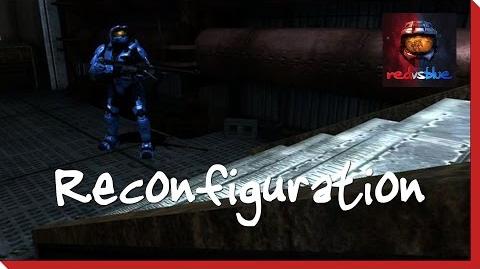 Retrieved from "https://rvb.fandom.com/wiki/Reconfiguration?oldid=117824"
Community content is available under CC-BY-SA unless otherwise noted.